Roach is a nothic who, for an indeterminate but obviously prolonged time, was trapped in the private athenaeum of The Primeval Archive.

The Party originally sought him out after Lilli Longshadow refused their Crossbones Doubloon, which may have allowed her to communicate with them about the camp or its activities. Lilli believed Roach could act as a kind of translator for them and--after warning of the danger involved--revealed to the party where they could find him. She seemed certain that Roach would not be reasoned with, and therefore provided them a paralysis poison to assist in the abduction.

When they found Roach, he was locked in a room with a swirling dust vortex, exposure to which seemed to induce madness in each of them.

Murmus Bigtoe and Algernon the Tall successfully managed to administer the paralytic given to them by Lilli with the combination of Mage Hand and Command. This enabled them to drag Roach's body out of danger, locking the room behind them as they left.

When the party located Roach, they found a large message carved into one of his dwelling's stone walls. It looked as though it originally read "MY DEAR ROCH, SMILING AT LAST," revealing the creature's original name.

The party delivered Roach to Lilli, who devised a crude interrogation chamber in a space beneath a large tree in The Fellgleam. Enticing him with a book that he clearly believed contained a secret he had spent centuries seeking, Lilli asked him to gaze into the mind of Grihymm Phrahdrandon and relay information about Crossbones that Grihymm himself was magically compelled not to speak.

Roach revealed much about the camp, the stolen Threads of the Old Weave, and mentioned both Twig the quickling and his goblin compatriots. Once his function was served, Lilli offered the party the choice of killing Roach or allowing him to live (although she indicated that killing him was likely a mercy). The Party elected to leave him to his fate in The Fellgleam armed only with a book containing a single cinnamon bun recipe that was conjured by Algernon the Tall.

"Did you change your accent because no one could stand the sound of your voice?"

Gillath has already forgotten you. So has Moradin. Your name will be lost forever; turned to dust with every weapon you ever forged.

Roach is quite mad and, when he does speak, his words are usually cruel.

His voice is entirely at odds with his gruesome appearance. Roach speaks cleanly and eloquently, and could be mistaken for a kindly grandfather if he would just say anything nice for a change. 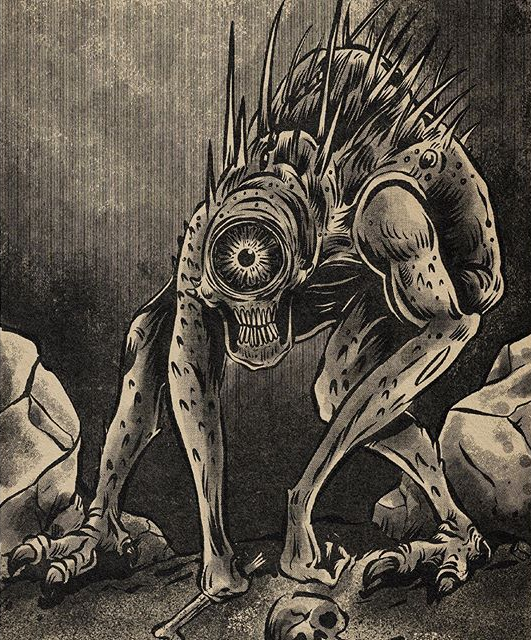