A towering Goliath with an intellect to match his stature, Zauroth was the leader and namesake of Zau's Raiders and the Chief of Crossbones before their mysterious and swift dissolution.

His first lieutenant is Khol Nazalk, who handled most of the day-to-day operations of the camp. Zau spent much of his time in his quarters, only interacting with the Raiders in moments of crisis. Seeing him about the camp was generally regarded as a bad omen and most feared dealing with him directly.

Zauroth is massive and without an apparent ounce of body fat. Most who meet him are intimidated by (if not genuinely fearful of) his obvious strength.

The large, diagonal black stripe across his face which was evidently self-administered. 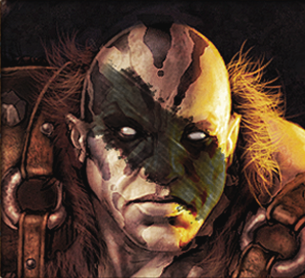 A towering Goliath with an intellect to match his stature. Leader and namesake of Zau's Raiders; Chief of Crossbones.