Janice is a heavily tattooed elf originally from Necine. She is currently the only known resident of Lady Mallory's Tower (outside of the Lady herself) in Witchmill.

Apprentice to the Witch

While many of her elven brethren would still very much have considered her a child, Janice evidently left her home to apprentice under Lady Mallory.

She is tight-lipped about her past and indeed her stewardship, though she will be quick to sell you something from the Tower Shop if you've got the coin. If not, she is liable to physicaly escort you out--whether you're ready or not.

Janice is covered in tattoos--fully sleeved on both arms, and a glance would suggest these sleeves continue onto her back and torso. She even has a sigil tattooed beneath her left eye, which some claim makes it difficult to lie to her for presumably magical reasons.

During the course of a conversation, many parts of these tattoos are liable to light up with a glow that--while subtle--is often difficult to ignore.

Janice maintains a brusque and aggressive demeanor while working in the Tower Shop. She has been known to use both her own magic--as well as any magical items at hand--to physically remove unwanted persons from the premises (sometimes tossing them directly into the water that surrounds the tower).

When treated respectfully, however, she welcomes barter and--although many simply find her intimidating--most praise her for being shrewd and fair. Castian in particular seems quite fond of her, though it's unclear if Janice would say the same of him.

The party has met with Janice behind-the-scenes of the Tower Shop, however, and now know the above to be an act (one which she will commit to even around them while in the Shop). The real Janice seems friendly, quiet nearly to the point of being demur, and quite kind. She is especially fond of Chompers & Scorch, for whom she cared while the party was on their mission in The Feywild. The young dragons reciprocate her affections. 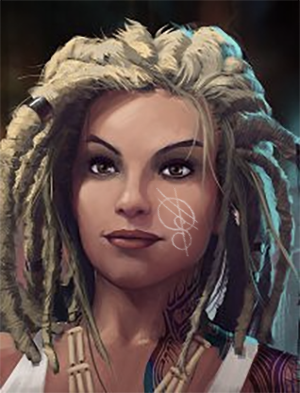