Sinfarena: And Murmus Bigtoe. What could I ask that you haven't the talent, energy, or dedication to simply replace? The only price I can think to demand... is a friend.

Sinfarena: Does it matter? Would you like to choose?

Sinfarena (often shortened to Sin) is a strange and maligned figure from The Feywild. Her existence was revealed to the party by Lady Mallory, who suggested that Sinfarena might be able to cure them of The Curse of Crossbones.

Sin and her nameless sisters live in a southern, plantation-style mansion in the Amberwood and are apparently unable to leave its walls. The House Without is every bit as peculiar as its inhabitants, though its moniker appears to sadden Sinfarena who simply calls it home. 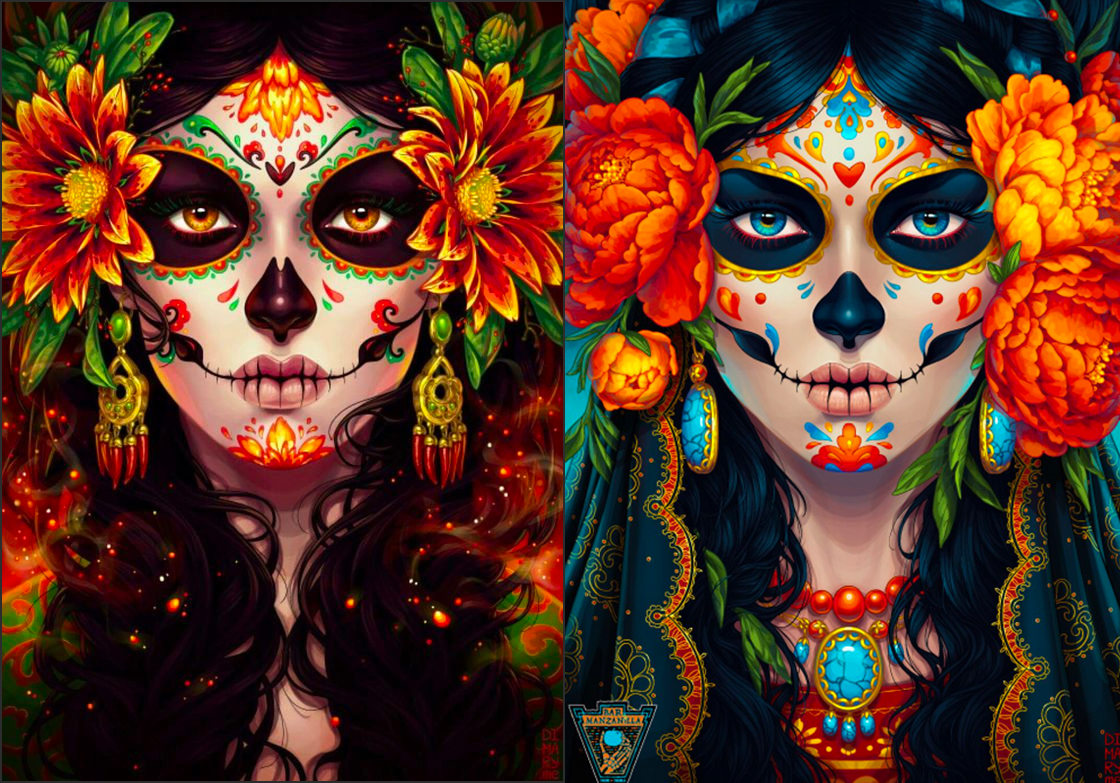 Sinfarena has two sisters who never leave her side. Although they bear little resemblance to Sin herself, the two are identical twins. They are nearly indistinguishable from one another, with only outfits and makeup to set them apart.

Neither one appears to speak beyond decorating Sin's comments with giggles or other reactions.

The Hag in the House Without

Following Twig Treefog along an ostensibly pointless and circuitous walk through the Amberwood, the party found themselves in a room spectacularly decorated with vibrant flowers, streamers, and skulls--ornately painted in every hue imaginable. The room was filled also with music and party guests, each of whom were dressed in costumes matching the bizarre scene (though these guests would prove to be illusions). At the center was Sin herself, somehow unmistakable amid the chaos.

Sinfarena was as bizarre as her home suggested she would be. Although both Lady Mallory and Twig Treefog each described her as a "hag," nothing of her home, demeanor or appearance corroborated this. In fact, she was friendly and hospitable during their meeting, and could fairly be described as beautiful--as alien and inscrutible as that beauty might have been.

Sinfarena seemed already familiar with the party (even to the point of addressing Grihymm Phrahdrandon by his true name) and claimed to know much about them. The party politely rejected her offer to remove Lady Mallory's arcane chokers from their necks, perhaps heeding Twig's warnings that nothing would be offered freely here.

Upon their first meeting, Sinfarena seemed to understand their damaged memories. She even offered the restoration of individual memories as a gift--one which only Murmus accepted. His next ten minutes were consumed with a vivid, serene vision of a working in a smithy he didn't quite recognize, but which felt like home. There was someone cooking a meal nearby, and he knew it was someone he loved. When he returned to Sinfarena's presence, it was as though only an instant had passed for the rest of the party, despite Murmus' certainty that his memory had lasted 10 or more minutes.

When pressed about the price for this gift, Sin simply replied that her price was "the story," adding that it was a price already paid.

Breaking the Curse of Crossbones

Sin described the curse afflicting the party as a "chain," adding that it bound them in two ways. The first of these bound the group to a "source," and the second bound the party to one another. She then proposed a bargain: the group as a whole could pay a single price to break the first binding, but each person would also pay an individual price to break the second. Although she had "not yet decided" upon the individual costs, the group agreed to these terms.

The favor she asked of the group was the retrieval of The Book of Leaves. She professed a love for the book--describing it as a catalog of legends and stories--and explained that it was being kept by the Autumn Queen in a private vault. Sin seemed offended that the queen--a notoriously jealous figure--would lock the book away from those who could otherwise appreciate it. She also seemed disinterested in what the party chose to do with the book after "liberating" it from the vault, suggesting that the book's availability was her sole concern.

After the party succeeded in retrieving the book (with the help of Anselenicus the boggle), they returned it to Sinfarena, who again asserted that she did not want to keep the book and that she'd be "no better than the Autumn Queen" if she did.

Determining that no one in the party had yet opened the book, she expressed her disappointment in their lack of curiosity but told them it was their prize to do with as they pleased. She added (after transforming her face into a ridiculous caricature of the Lady) that "Mallory would love this book... though it would be wasted on her."

When asked why, her simple reponse to the party was, "Because she is not you!"

The Cost of Doing Business

As part of their deal, Sinfarena demanded a cost for each "binding" that she broke, explaining first that she would break six bindings or none at all.

Sin claimed that the process, once begun, could not be stopped. Although she invited anyone to decline to pay their price, she informed the party that all deferred costs would be paid by those who had already had their curse broken. In essence: six prices would be paid no matter what; it was up to the party whether those were split evenly among them. In the end, no one refused to pay what was asked of them.

Algernon the Tall was the first to be addressed and the first to accept his deal. Addressing the wizard as "the mighty wizard with fire in his heart," Sinfarena requested "a spell" from the hill dwarf, adding a question she would soon repeat to each of the party: "Do we have a deal?"

Though Algernon expressed concern about which spell he was being asked to surrender, he ultimately conceded. Sinfarena touched one of her cold, iron fingernails to Algernon's palm before drawing it back slowly--a wisp of black vapor trailing behind it and out of Algernon's hand.

Though he felt as though he had just cast a third-level spell, he noticed no other immediate impact, and Sinfarena assured him that his curse was broken. This spell would turn out later to the fireball responsible for The Kor Ellin Massacre.

Faewynn Treewalker, the "wielder of the mighty Rain Bow," was next. Sin's request of the ranger was a simple "trade of arrows."

Sinfarena reached over Fae's shoulder to the quiver on her back. It still contained a number of arrows laced with Grung poison that Fae had collected from the blue grungs of Riverrock during the party's brief but eventful visit.

Retrieving one and handing it to Fae, Sinfarena placed a painted skull on the head of one of her sisters and instructed Fae to knock it off with a shot. Fae's aim was perfect and true, but the arrow vanished into a rift (not unlike the ones she had seen a certain boggle open) before the skull clattered unceremoniously to the floor.

Sin was content that Fae had paid her price and repeated the same process she had done for Algernon, ending the curse for Faewynn as well.

The third to be addressed was Johann, the "master storyteller and silvertongue." From the bard, Sin requested "a truth", adding that it would be "nothing small, boring or inconsequential."

He thought for a moment before telling Sinfarena that his true, full name was Johann VonGruppen. In response, Sinfarena simply smiled. Johann replied affirmatively when she repeated her question once more: "Do we have a deal?"

Grihymm Phrahdrandon, the "chosen of Pelor," was the next to be offered a deal. The exchange in this case was characteristically terse for Grihymm, as Sin asked of him "a blessing" and being perhaps unwilling to force a friend to shoulder that cost, Grihymm accepted.

At first, he did not notice whether anything at all had changed. Sinfarena completed her small ritual, but nothing seemed lost or altered in the deal. This feeling lasted until the merest moment after he set foot outside The House Without into the Everbright sun, whose warmth he found he could no longer feel.

Murmus Bigtoe, "ambassador of Moradin," was the penultimate party member to be addressed. The price asked of him seemed tonally different and more abstract than his predecessors'. Sinfarena insisted that his price be something not easily replaced, but was impressed that she found little outside of his means to restore. Eventually, she asked of him "a friend."

Murmus quickly inquired as to which friend she meant, to which the hag replied with a question of her own. She wanted to know whether Murmus would like to choose.

Murmus asked if Sinfarena considered herself a friend and she emphatically affirmed that she was. Calling Murmus' response "an interesting one," she mocked some hurt feelings and pressed again whether they had a deal. Murmus agreed that they did, and his curse was broken as well.

The identity of the "friend" that this would cost Murmus has been interpreted in multiple ways. For example, it was Murmus' very friendship which placed Lorna in a position to die during The Kor Ellin Massacre at the unwitting hands of Algernon the Tall. Her death, of course, jeopardized his friendship with Walcott, to whom he had promised Lorna's safe return to Witchmill.

To ask Murmus, however, would yield another interpretation still. He would say that he got exactly what he asked for, and that Sinfarena was indeed no longer his friend.

Vornaar was the last to be addressed, with Sinfarena calling him "her champion." This remark seemed to confuse Vornaar, who asked what she meant but got little in the way of a response beyond another compliment: "Just look at you! Who else could it be?"

Sinfarena seemed swift and certain in her request of Vornaar, demanding "a drop of blood." Again skeptical, Vornaar considered for a moment before asking "whose blood?" The question certainly seemed to amuse Sin, who chuckled and replied in much the same way she had to Murmus, asking if it mattered.

Deciding in the end that it did not, Vornaar confirmed that they had a deal and his curse (originally thrust upon him by Faewynn) was lifted. 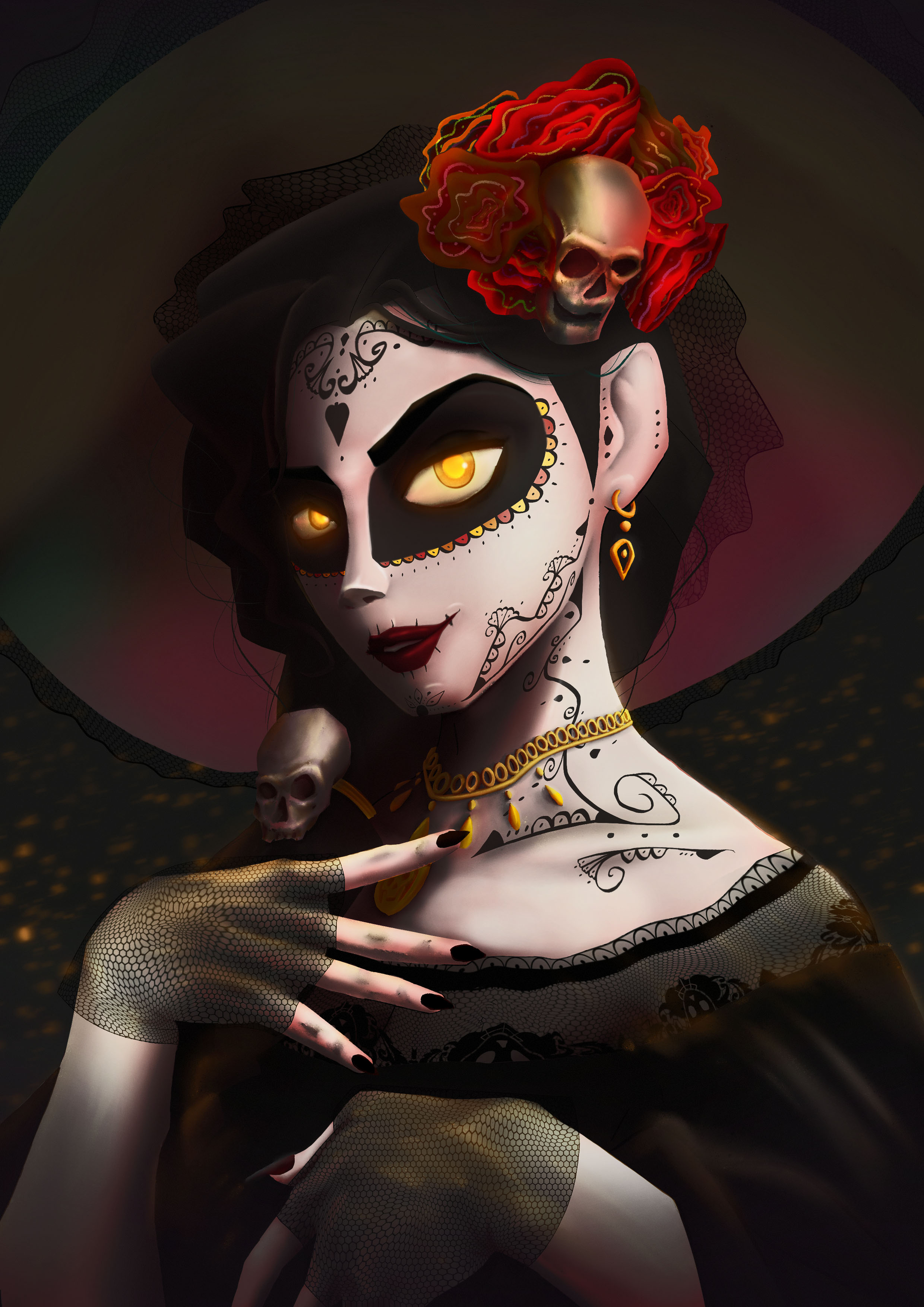