The north area of the Karte Island is dominated by the Chalk Expanse, the biggest of the White Forests in the archipelago.
Hundreds of plant and animal species inhabit this very special ecosystem, adapted to a soil that does not allow for green-coloured plants.   The Chalk Expanse is well known for the circle of gigantic waterfalls known as the Mightiest Roar, but no less impressive is its population of Towering Watchers, a tree, found only there, that can reach up to 140m high, making it the tallest plant in the archipelago.
The Haan Archipelago
Open full size

Towering watcher
Show to the bad birds your might
Keep an eye on their flight
And tend to my dreams this night
— A Kartian children's rhyme, sung before sleeping

This tree, also known as Alcholoh's watchtower due to how this particular bird uses the treetops of them to make their nests, usually reaches between 70 and 100 meters high on its maturity (At around 100 years old) and then keeps growing very slowly over the rest of its life.
The base takes around 20 to 30 meters of diameter on its maturity, though the trunk quickly slims to a diameter of around 10 meters, staying mostly constant up to the treetop.   Towering watchers are a white plant species, and can only grow on terrain unfit for coloured flora. They grow in extremely humid and foggy areas of the Chalk expanse, particularly close to the rivers that cross it. They produce gigantic clusters of orange flowers which pollen gets carried to other trees by the wind, producing a small hard-shelled fruit that gets usually cracked open by the impact as it falls to the floor.

"That hit harder than a watcher's shell"
— Popular Kartian saying

When the fruit of the towering watcher hits the ground, the hard shell cracks by the seam, revealing two halves separated by a soft membrane. Inside, it contains a very sweet jam-like red substance full of small, tasty and nutritious seeds.
Though nobody has successfully produced a watcher's fruit outside the Chalk Expanse, inhabitants of Karte sometimes roam the jungle's floor in summer to gather the halves, wearing big, hard hats and shoulder pads to prevent being knocked out by the hard shells, a rare occurrence, albeit prominent in the Kartian informal lexicon.

"Gotta be careful with these balls dropping"

Towering watchers have an extremely thick bark that is very resistant to fire. The plant uses this to survive forest fires and spread its seeds on the burnt ground, and people have learned to use this bark to fireproof buildings and structures. Its wood is not widely used, as chopping down a towering watcher is considered from disrepectul to bad luck in the Kartian culture. However, wood from naturally-fell trees is sometimes used to make tokens and toys, or sometimes beams and other structures that benefit from this wood's pliability.

Effects of the High Rust

Trees took a hard hit with the High Rust though, for most species, it meant losing a good chunk of their leaves and top branches, just to regrow them later.
In the case of the towering watchers, though, the mature ones got affected by rust in the middle of their trunks through an area several meters tall, and in some cases, the rust carved into them deeply, infecting and spreading far and wide. Dozens to hundreds of towering watchers died and fell, broken in half, into the forest floor.   Most of the surviving trees show the scars of the rust, as a very wide band of corroded, orange bark. 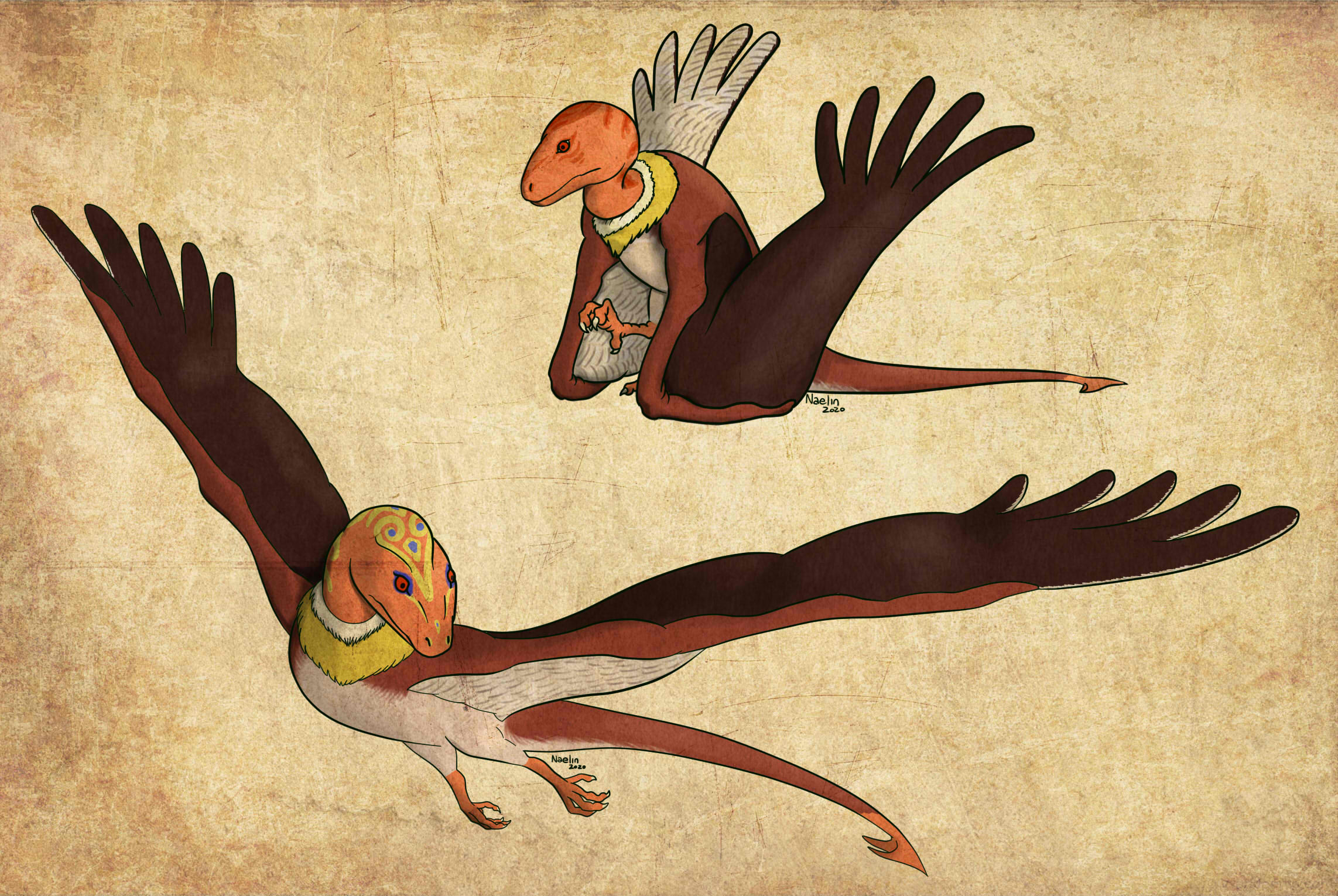 Alcholoh by Naelín
Alcholohs, gigantic scavenger birds, prefer to soar the skies at very high altitudes, and almost exclusively make their nests on mountains or the treetops of towering watchers.
Dozens of species fed off the fallen fruits of the tree, dispersing its seeds with their droppings, though the plant fares quite better when its fruits fall on recently burnt ground, as it will have less competition.

Being the tallest, biggest tree in the archipelago and being found exclusively in the Chalk Expanse, the towering watchers became an integral part of the Kartian's cultural identity.   These trees have inspired and made themselves present in dozens of poems, songs, popular sayings, and artwork, from the most elevated professional pieces to the bread and butter of everyday conversation.

"What a tragedy, he was nutted by a watcher"

"As small petals dance in the stagnant air of the Expanse
I made myself small, for you, for a rotten romance
I gave everything away to meet once more, to be joined again.
I humbled myself at the bottom of the unbroken tree, was it all in vain?"
— Fragment of a Kartian poem

Chopping down towering watchers is considered outrageous in Karte, but the small pieces made with the already fallen wood are treasured by its people.

"I've gone to the Roar to hear its scream
I've travelled north through corridors and bridges
I've stared at the waters and I've seen
The wailing souls emerging from the seams
The reflection of my nature staring back at me
The newfound memories creeping up my skin
"I've got what I came for" I deemed.
Then I felt how judgement on my scales leeched
A sight unseen, mighty and keen
Peered from above crushing me
Then I saw it, a survivor of the rust, the tallest tree
How could I miss the Expanse's truest king?"

The stunning size of the towering watchers could not be supported in most places outside the Chalk Expanse: At a certain height, the tree would simply be unable to make water reach the leaves at the top.
This is the reason why the largest, eldest trees are found in the most humid areas of the jungle: The Chalk Expanse is extremely prone to thick, dense fog, which aids the tree in keeping the water going up to its extreme heights.
Plants and Fungi
In response to the prompt Describe an unusual or extraordinary plant species in one biome of your world!

"What a tragedy, he was nutted by a watcher" - ahahaahahahahahaha.   I really do love how you remember to talk about the impact of the Rust in most of your articles. It really affected a lot of the world, huh? :(

One day I realized that the rust must have affected most of the bird life in the archipelago and it was the OhNo-est moment in all of my worldbuilding. I will have to cover that at some point.   Thank you for your comment Emy <3

Oh no! Not the birbs!

I second all of this--I really love the scattering of poetry throughout :)

Tree art! I love how you've done scale--it's so crazy to see how big it is to scale against normal-sized animals hidden in the base there. Wow! (Also I wonder how much native wildlife in the Expanse gets whacked mob-style on a regular basis XD) What happens if one of those flower clusters or nests falls--is that used at all culturally?

This article is so good!! I love the pictures and all the details. But what I loved the most was the songs and poems, that showed the true importance of this trees for the culture. Great job!

Thank you Meluuuu <3 I struggled a lot with the rhymes hahaha, but I think it ended up being good enough :p

Hello ! I really liked reading this entry. Your small quotes and sayings were a really pleasant humorous touch to an otherwise interesting plant.   Unsurprisingly, I have a few questions about the plant's nature, and the Chalk Expanse. Why can't chlorophyll-based plant grow on it? Does it block sunlight? I suppose you will make an article about it, so I'll wait for that. Similarly, I noted that the plant reaches a hundred meters in just a century. Compared to tall growing trees on Earth, that seems pretty fast! Giant sequoias which reach a similar height grow at roughly half that speed.   If the trees keep growing, do they reach a point at which they die because they cannot bring water to they uppermost leaves? Or do they not require evapotranspiration in their growth process?   I really like the description you made of the fruit, and reproduction pattern of the plant! Those fruits seem like a major danger for unknowing passerbys.

With love,   Pouaseuille.   Feel free to check out my entry for the Peculiar Plant challenge! Or don't, if you don't want to.

Thank you for your great comment! I was actually thinking about explaining how the tree bypasses the "height limit" due to the Chalk Expanse being super humid and foggy but I thought that could be too much... I really thought no one would say "wait but shouldn't they stop at around 120m?" hahaha   I added a small section on the sidebar with that now.   Regarding the white forests, the issue lies in the soil. The Expanse is not the only area of this kind, it is just the biggest. I will, indeed, write an article about it later on! :)

This was a great article! Love the quotes and poetry that are intermingled in the text. I was thinking about how a nut from that height would kill a person but then a little bit further I saw they used some protection :) I especially love the art of the birds. It would be nice perhaps if this image were a bit bigger since it's a nice piece.

Hi Kefkejaco!   Thank you very much <3 The Alcholohs will have their own article soon, with the picture showcased way bigger. I wanted to add it here though because I quite like how it turned out, thank you! (If you want to see a bigger version, you can click on it and it will redirect you to the picture itself :) )

Ooooh great work Naelin!! I love the art you have, that tree looks fantastic. The bits of poetry throughout really show how important this tree is to the Kartians, its a lovely way of doing it, though not gonna lie this one ("What a tragedy, he was nutted by a watcher") is my favourite xD

That one quote was totally TJ's fault hahahahaha This was a lovely, innocent article until I dared let him help with the brainstorming!   Thank you for your comment TC <3

Great article! I love your illustrations and how your page looks :D In particular the way you've used a long image of your tree to represent its scale is very nice!   The Chalk expanse is an interesting idea, with all flora being white! I like how you've represented that on your map, that illustrate well the concept.   Your poems and sayings are a nice additions.   I'm wondering how common the tree is in the Chalk Expanse? Are there forests where the tree is dominant?   I like your explanation of how the trees can grow so high and still get access to water.   For your High Rust article, you could add a short mouse hover snippet to the article in English since this is an intriguing concept and I'd like to know a bit more about it.   A few grammar corrections:   " uses the treetops of them to make their nests," this should be "their treetops"   "which pollen gets carried to other trees by the wind" that "which" should be a "whose"

Feel free to check my my plant challenge article!