"No we are not controlled by Cyan Stone! I mean, we let them decide some things, but... that just seems easier"
— A Ruhk from a smaller town

Located on the middle of the southwestern coast of Ruh island, Cyan stone is the biggest settlement on this island and acts as the centre of operations when the people from the scattered, independent towns need to take unified decisions on important topics.   Cyan Stone gets his name from the vast deposits of turquoise stone that are mined on the closest area of the mountain range, and that is used to decorate many places in the city, from the monuments and main buildings to parts of the roads, and even some house walls and posts.   The city is divided into three main "areas", the Port Watch at the west looks at the sea and contains the port, warehouses, and big workshops. The Sky Watch, at the north area, houses most of the population on smaller buildings and is closer to the fields that can be found just out of the city close to the northwest coastal area. At the south, the Peninsula Watch houses the most elegant buildings, including theatre halls, houses of pleasure, big taverns, inns, etc, as well as some bigger houses.   At the southwest corner of the Peninsula Watch area, there is a big, open and well-manicured field known as the Alzufhar rest. The area is used for the alzufhars to have a secure place to rest and graze, with freshwater and sleeping stables. It is enclosed at the south and west with fences to prevent predators from going in, but there are several openings at the north and east sides for the alzufhars to freely roam the city if so they desire.   Close to the city's center there is a very tall tower, known nowadays as the Cyan Tower of the Stars. Before the High Rust destroyed the top half, the tower was known as the "Cyan Tower of the RuhRic", as it housed the RuhRic of the city and its family, and acted as the meeting hall for the RuhRics of the island's towns when meetings ensued.   Once the High Rust passed, taking with him Cyan Stone's RuhRic, most of her family and half of the tower, a new, horizontally-arranged building known as the RuhRic House was constructed in front of the city centre's plaza and set to take the role of the tower. As for the tower, plans were made to dismantled it, until a council of astronomers urged the RuhRic to restore it and turn it into the most majestic astronomy observatory in the archipelago. 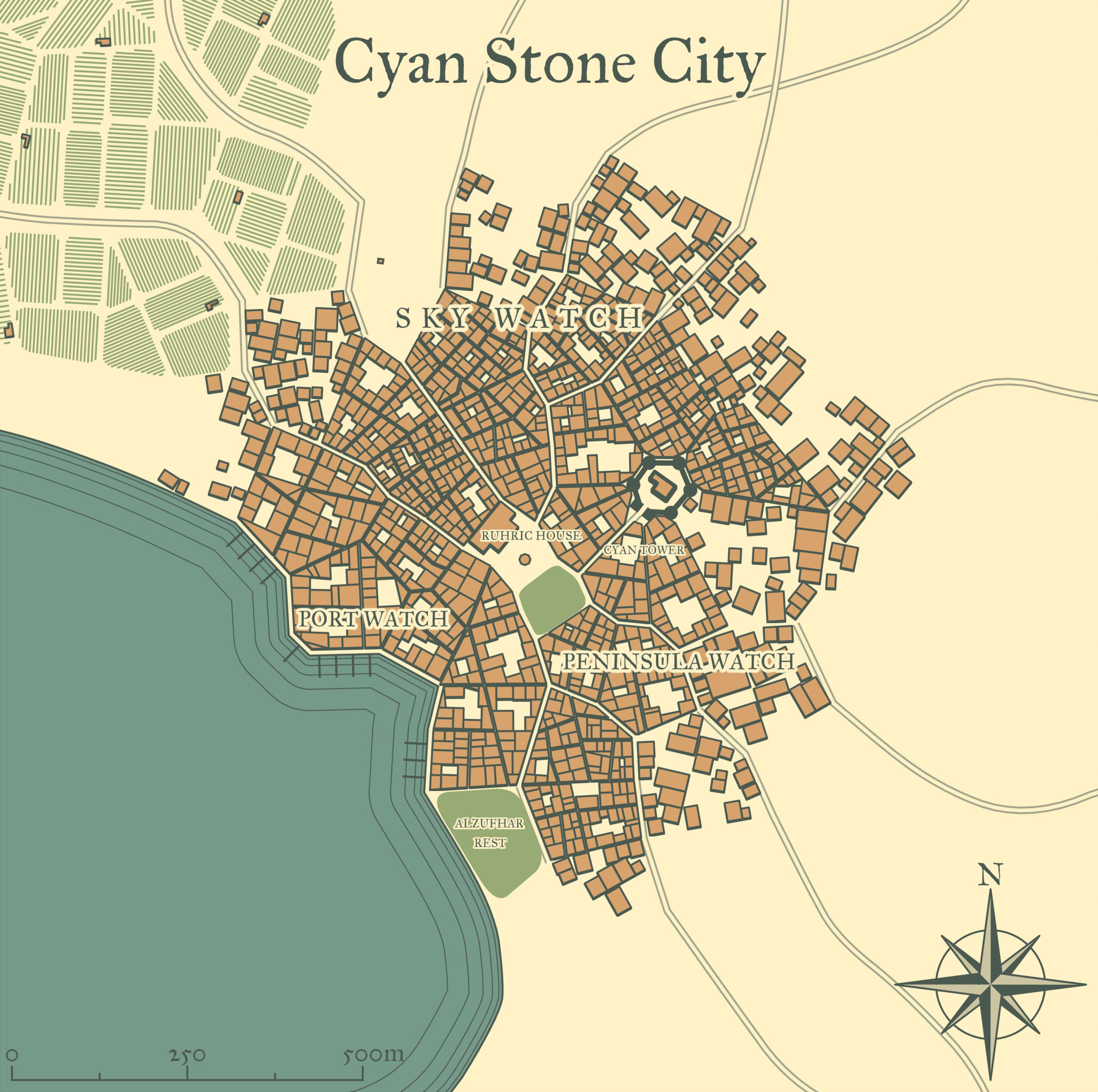 Cyan Tower of the Stars

The old RuhRic tower in Cyan Stone City, remodelled after the High Rust to become an observatory

All of the text and art of Symbols of Power, including the CSS theme, have been created by David Cutuli (Naelin) unless otherwise specified.
All of the art and content attributed to the pseudonyms of "Welkinal", "Danae" or "Veld" have been created by David Cutuli (Naelin).
SoP theme song composed and interpreted by Lu Cutuli. | SoP logo and Out of Universe logo created by TJ Trewin. | Open paper texture by Markus Spiske.
Huge thanks to TJ Trewin for his help with SoP's css theme design.
Cover image: Banner Ruh by Naelin
Article template
Settlement
World
Symbols of Power
Category
Ruh in Places, Factions and People
Author
Naelin
Publication Date
14 Dec, 2020
Creation Date
13 Dec, 2020
Last Update Date
5 Jul, 2022
Visibility
Public
Views
296
Favorites
12
Comments
2
Tags
English WorldEmber Ruh

I bet the city is beautiful to look at if places are decorated with turquoise. I like that it is sort of unofficially in charge of the surrounding areas, too.

Thank you for your comment <3 People from Ruh are very disinterested about how they are regarded by other nations :p

Nice city, I'd love to know more about the people that live in it!   There were a couple of mentions to "alzufhars", but there is no indication as to what they are. A tooltip would help a lot to get more immersed in the setting.   I noticed on the map that there is a mountain chain in Ruh. Is there any village/city/settlement on the other side of the mountain range? Do they also mine turquoise, or something else? (or nothing)

Thank you for your comment <3 Oops, it seems I forgot to link their article. The alzufhars are the most widespread mount in the archipelago. I will add a tooltip as well as the link, thanks for the suggestion :)   Ruh is filled with small towns all around! I will keep writing about this nation. Lots of astronomers to write about!