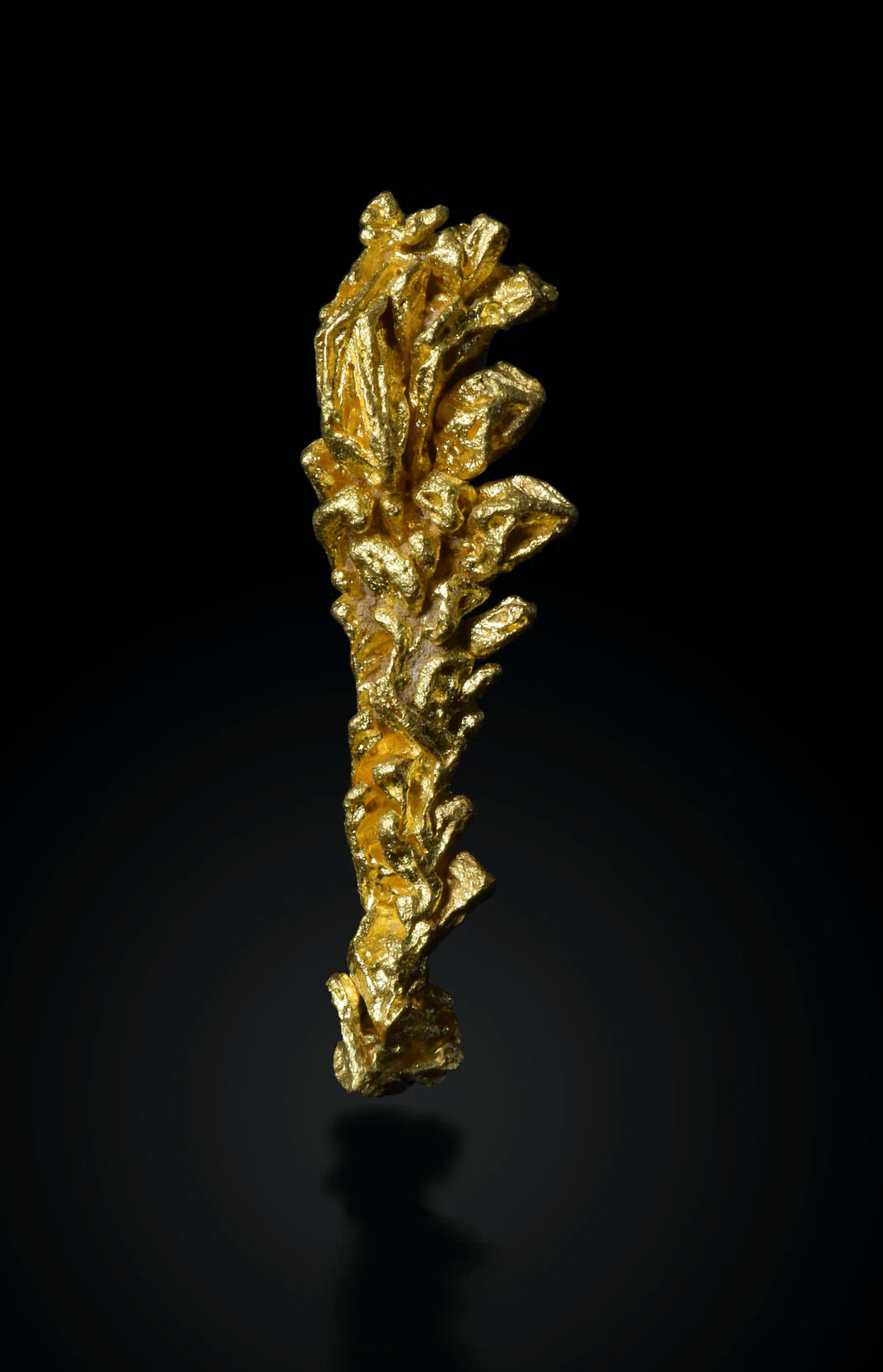 Native Gold by USGS
The Island of Karte has the biggest and longest mountain range in the archipelago, providing lots of minerals and metals to the kingdom. However, the kingdom has had a shortage of gold for their coinage for several decades, until, mostly by chance, a large deposit of it was found on an extremely remote area on the south of it.

This place, known as the town of Blest, was occupied until the 2980 E.Alz decade by small groups of scalies, originally nomads, that settled in the coast of the river Tismasul. This group grew into a small town of a few dozen people, that lived out of the resources they got from the riverbank and were in general out of the sphere of influence and control of the kingdom.   The town was known to be there due to the scientific and military expeditions that sometimes went by it, but it was mostly ignored as it was too small and insignificant to pay it any attention. However, during 2976 E.Alz, an expedition that went through the town was surprised to find that most of the inhabitants were adorning their bodies with golden jewellery. After asking around with the locals, they found that they were picking up a lot of gold nuggets while panning the riverbed for resources.

News travelled fast when the expedition went back and reported to the kingdom and in a matter of seven years, the town was "acquired" by the king and transformed into a profitable mining town, complete with a small port for the merchant ships to travel back and forth to the capital.   The king immediately put in place big incentives for people to move to Blest and work the mines, getting many impoverished families to move their whole lives to the other end of the island, sometimes in caravans organized by the state to get things going on as fast as possible.   The small settlement has turned into a mining town four decades ago, with more than 600 citizens. It has quite a gloomy reputation, as it is an almost completely disconnected place very far from the rest of the country (being the southernmost non-hostile settlement of the archipelago) seen as a last resort option for many. Its inhabitants are known with many equally gloomy names, from "the ones who left" to "Middle-of-nowheres".

The native inhabitants of Blest were told again and again that the miners and machinery were taken just to explore the mountain and to add to what was already there without any intention of disturbing their lifestyle. However, the once close-knit, small, remote, almost hunter-gatherer tribe got soon pressed with pollution, taxation, regulations and, again and again, they were told that they just needed to "move" this or that structure to put it out of the way of the miners.   None of the native inhabitants of Blest are left in the mining town. On a matter of a year, they had picked up their now filthy possessions and walked their way south, with their eyes always locked into the Tismasul river east of them, and terrible sadness in their gaze. There had been no reports of them or their whereabouts ever again.

"The Civil War doesn't reach here. I am making the money the best I can. I am feeding my family."
— A miner living in Blest

Founding Date
2983 E.Alz
Alternative Name(s)
The Middle of Nowhere
Type
Town
Population
~650 people
Location under
Karte Island
Owner/Ruler
Rastapuj
Owning Organization
Kingdom of Karte
The Haan Archipelago
Open full size
Places in Karte
In response to the prompt When people say "the middle of nowhere" or "the frontier" what settlement name do they use?

All of the text and art of Symbols of Power, including the CSS theme, have been created by David Cutuli (Naelin) unless otherwise specified.
All of the art and content attributed to the pseudonyms of "Welkinal", "Danae" or "Veld" have been created by David Cutuli (Naelin).
SoP theme song composed and interpreted by Lu Cutuli. | SoP logo and Out of Universe logo created by TJ Trewin. | Open paper texture by Markus Spiske.
Huge thanks to TJ Trewin for his help with SoP's css theme design.
Cover image: Banner Karte by Naelín
Article template
Settlement
World
Symbols of Power
Category
Places in Karte in Karte
Author
Naelin
Publication Date
31 Jan, 2021
Creation Date
30 Jan, 2021
Last Update Date
15 Jun, 2022
Visibility
Public
Views
318
Favorites
18
Comments
2
Tags
English Prompt Karte

Thank you Luca! (Yes I am replying half a year late, I'm terrible hahaha) I recently wrote about a logging town whose history is based on a mining one (The article is called "Apharens", the story is based in West Virginia in general)   I've changed the snippet and I will translate the article as soon as I can :)

Really interesting town. Mining towns are always fascinating to me. :) I feel slightly concerned for the poor impoverished people who were incentivised to move there.