Across the Rumbling Field

After a few spritzes Johann's Prestidigitation, The Party and their dragons found themselves clean of bulette gore and viscera. They then continued on across the vast, empty plain they found themselves upon. When Faewynn Treewalker noticed some deep rumbling coming from the ground beneath her, she decided it was best for all to pick up the pace as they proceeded to cross the barren expanse.


Reaching the treeline and the familiarity of The Fellgleam, the party noticed that the clear, cloudless sky (under which they had just spent hours walking) seemed to be replaced in an instant by a gray, overcast afternoon. Turning around, it seemed that the giant field had entirely vanished--replaced by trees and forest that most certainly had not been there before. Murmus Bigtoe attempted to Detect Magic to see if any particular spell had been cast upon or around them, but found only the expected--that arcane energy seemed to pervade the Fellgleam itself.


Traveling a little further, the party found themselves in the vicinity of a couple of trolls. Fae decided to climb the nearest tree, and Grihymm instructed their dragon friends to join her above. Johann--for reasons unknown--convinced Marin that he needed to play dead in order to survive the encounter. To help him with this, he cast Feign Death after successfully deceiving the poor grung into believing it was necessary. With some assistance from one of their dragon friends, the party was able to quickly dispatch the two monsters. Seeing and recalling the regenerative power of these creatures, Johann decided to collect some of their blood in a vial. Sadly, the only suitable container he had on his person was a perfume bottle. Clearly not wanting to waste the substance, he doused himself in it.


A Night in the Forest

Although they had several hours left before nightfall, the group decided that they were exhausted from the day's battles, and chose next to gather inside the Tiny Hut that Algernon the Tall had learned to conjure. The smell of perfume threatened to overwhelm the tight space, but more Prestidigitation countered the odor onslaught before anyone passed out.


Once everyone had gotten used to their new lodgings, Fae began her trance while the remainder of the party went to sleep. Darkness fell upon the dome more quickly than anticipated, as the gathering clouds finally gave away to a downpour, evolving quickly into an all-out storm. Fae awoke from her meditation to the pounding rain and eerie, white lights seeming to float untethered through the deep forest. She would soon be distracted from the hypnotic gleaming by the shape of a tall, slender tree that she was certain had not been there earlier. Staring more closely at it, the "tree" began to turn slowly toward her, revealing two fiery red eyes glowing in the dark. As the creature turned fully around, an additional red light shone forth from behind an apparent ribcage, and the outline of the terrifying creature revealed itself to Fae. 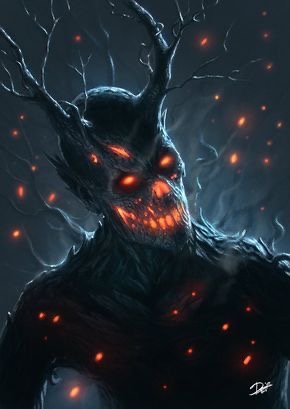 With a single, impossibly graceful motion, the creature covered the fifty feet between it and the dome. Seeing now the creature's hideous face, Fae was disturbed and frightened, and not just a little worried for her safety. The monster would tap one of its long, dark claws on the outer wall of the dome a few times before a crack of thunder seemed to distract it--sending it shrieking off into the trees. Fae awoke Algernon as planned, and he cast his Russian-nesting Tiny Hut within the first to extend their protection through the morning.


The slightly smaller Tiny Hut survived the night as planned, and all awoke unharmed in the morning, finding however that the troll corpses had vanished.


A Route About, a Root, a Boat

The party continued on their journey in what turned out to be a quiet day in the Fellgleam. They managed to make good time to the river that Marin had told them about, noting on the way that the trees were getting smaller and more sparse as the land turned wet and swampy. Arriving at the banks of the river, Murmus asked Marin to see if he could find where he left his boat nearly two years before. Marin agreed to try, and--finding an apparently familiar rock formation in the river--wandered off into the trees.


Eventually, he would stop at one in particular, whose giant roots were exposed through the swampy earth. One of the roots had, at one part, briefly taken the shape of a longboat before extending on as a normal root. This was not a case of nature growing around an obstacle--rather, it appeared as though the clearly discernible boat was--and always had been--part of the root structure of this tree. Marin confirmed that this was not how he left it.


With some hammering, Murmus was able to break apart the root, freeing the boat from within it. He was further able to create four makeshift oars for the craft (an act that left him sweaty and proud). The group would then carry each back to the river and begin their journey down the river. After some initial difficulty getting the hang of piloting the boat, the party managed to figure it out in time to dodge a rock formation in the water.


Realizing that the sun was about to set, they elected to travel back to shore and set up another Tiny Hut for the evening--into which they dragged their boat.


Fuck Dragons, and Fuck Whatever That Thing Is

With some masterful instruction, Johann VonGruppen was able to teach the party's dragon companions to say "fuck" in common whenever he gave the appropriate hand signal. This the dragons seemed to enjoy greatly, with the exception of Grihymm Phrahdrandon who expressed distaste for the whole affair.
Eventually the party would settle down to sleep for the night, leaving Fae once again awake to face the terrors of nighttime in the Fellgleam. After being greeted at first by the familiar lights of the night before, Fae eventually caught the sound of wild laughter, coming from something apparently small but invisible to her. After a time, the laughter was joined in a chorus of other laughs until it became an all-consuming static. The source of the cacophony became obvious soon after, as a giant plantlike monstrosity--far bigger than the dome in which she was seated--moved to investigate Algernon's Tiny Hut. 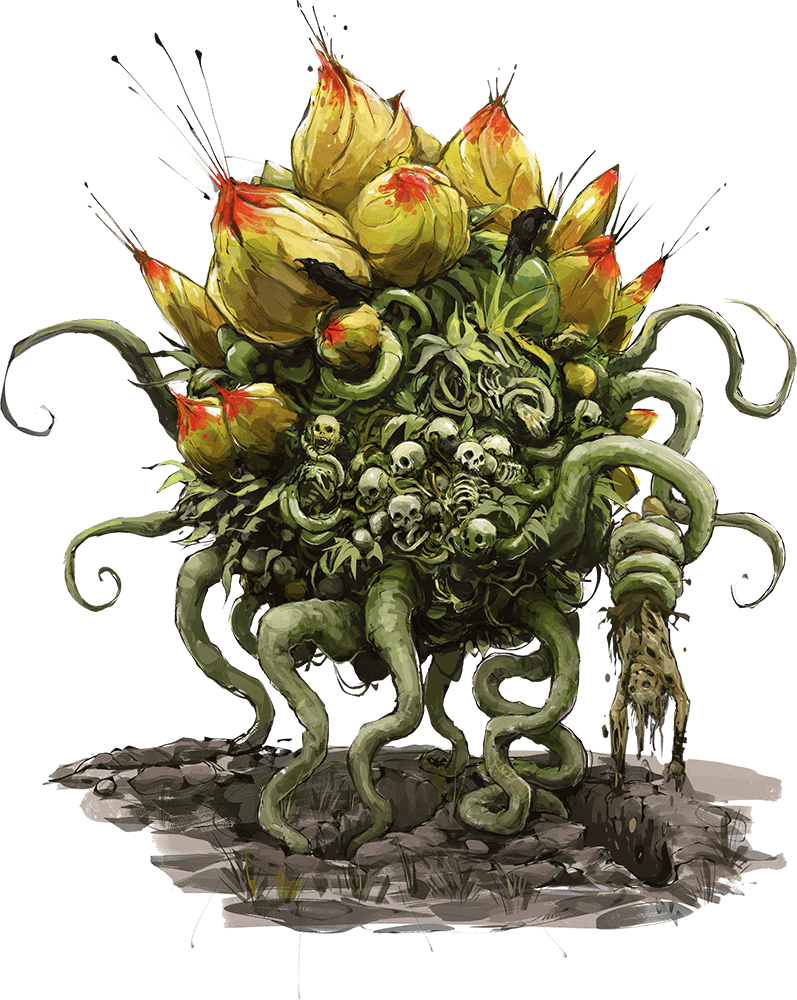 The plant revealed a huge collection of skeletons and corpses apparently grafted onto its body as it climbed atop the dome, obscuring the view of the outside for all those within. Fae woke her fellow adventurers and Johann decided to stick his sword point-first outside the veil of protection. He made contact with something, and the creature began to scream in the thousand voices that had been laughing earlier. It circled the dome a number of times before apparently losing interest in it and moving on.

The party awoke again unharmed the next morning and continued on their journey to Riverrock. Marin finally admitted that he never thought they'd actually take him back, much less survive the journey. Expressing his gratitude, he also had some words of warning to the Party.


The grung requested that they not use the name of Marin while at Riverrock, suggesting they refer to him as Tyllin if they had to refer to him at all. The Party agreed, but the grung seemed reluctant to share the specifics behind his request. He instructed that traders from the town of Witchmill visit the ruins from time to time, and that the party's arrival would not be met with suspicion or concern as long as they behaved themselves. He did warn, however, that they ought to be careful if they choose to have any dealings with the sovereign Cyrus. Marin--now Tyllin--suggested that he could be trusted to honor a contract, but would as soon kill the party if it suited him.


As the party disembarked their boat, they stared up at the massive stone ruins, curious about what awaited them inside.