Grassland Home of the Humans

The Great Plains are home to the Human Empire, Dinosaurs and a strange type of grass that can range in height from six feet tall to well over sixty feet. The plains have a northern border against the Goliath's Cradle, they extend west to Lake Idryl and the forests that belong to Elves and Fairies. They reach south to the Little Greenwood and east to the foot of the mountain range of the Great Furnaces. Here the climate is warm and dry, the growing months are long but there is little in the way of lakes or ponds because the two rivers that cut through the land have created vast canyons with their passage called the Sulphur and the Saltpeter. Water here generally wells up from the ground and in some areas, you can find geysers that bring boiling water up from the depths of the continent. The land here is mostly flat and if viewed from above then there seems to be little deviance in elevation, few hills and even fewer dips but this is not the case. Hidden from view by a special strain of grass the land can dip far down and hide entire roads, towns and castles beneath the innocent front of the grasslands.   Dinosaurs roam free here, pushing out most other wildlife. Out on the flat lands where the grass is only six feet tall you can find a variety of creatures to include Triceratops, Stegosaurus, Velociraptor, even Allosaurus and Ankylosaurus. These animals are commonplace here both predator and prey are considered normal sites in the human empire. While they are dangerous to the common traveler they can be used as mounts and pack animals in this region to great effect and have been for several years. In the Depths, where the ground dives down but the grass grows so tall that you cannot tell, many more types of prehistoric monsters can be found alive and naturally thriving. Tyrannosaurus and Brontosaurus are among just a few of the giant types of dinosaur that live in these areas. Something about the climate has allowed these creatures to not just persist but to be the dominant type of animal that lives in the Great Plains though they seldom roam beyond the borders of this area. The edges of the grasslands act as a natural barrier that the animals seem content to respect, even domesticated dinosaurs that are left to their own devices will naturally return to this area.   The climate is warm and dry on the Flatlands but with a wind that brings heavy thunderstorms from the mountains on occasion. Because of these storms, the Depths can retain natural pools of water for the large creatures that live there and become quite humid throughout the winter months. The summer is long here and while ice and snow can be seen during the winter months it can only be found on the Flatlands, if you venture into the Depths you will be met with a breath of undying and humid heat that scholars have not quite explain yet. For an unknown reason the grass is so hardy in the Great Plains that it cannot become brittle, even frozen it continues to bend in the wind and grow as if it doesn't notice the cold. Fire is a great concern this area though and the residents of it will take great care against a grassland fire ever starting, it can be devastating and nearly impossible to contain though the Depths appear to be much more resilient to prolonged fires than the Flatlands.

The entirety of the plains is covered in a unique grass that stands tall and proud. Among this grass, three prominent things make their home: Dinosaurs of various shapes and sizes, the Human Empire which has persevered for thousands of years, and Castle Nightbreeze, an ancient castle that marks the first civilization founded by humanity as a race.   Only places where towns, farmland or ranches exist are able to consistently drive down the high grass that is native only to the Great Plains. Without a height exceeding six feet, you won't be able to gain a view over the sea of grass regardless of winter or summer months because of how hardy the plant is. Towns and castles rise up like small islands in a vast sea of green or during the cold months, brown. Roads snake through this vast grassland like string scattered across a map and must be installed with a special mixture of gravel to ensure that the grass does not overtake them. Regardless of if the grass is poisoned, burnt or cut it will always grow back to its former height within two weeks which ensures that the land has a timeless look when viewed from a great height. There are two main areas that you will encounter in the Great Plains: the Flatlands and the Depths.   Prehistoric wildlife is considered mundane and trivial in the Great Plains, scholars have yet to find a reason why this place seems to support wildlife that no other place in the world can. While you would expect dinosaurs to be present in any hot environment that just isn't the case. Dinosaurs not only thrive in this environment, but they are highly territorial, pushing other animals out of their area as they seek to recreate a habitat long extinct from the rest of the world. Even dinosaurs that are used as mounts and pack animals will only leave the Great Plains when they are made to by a rider, as soon as they are left to their own devices, they will try to return home. The edge of the grasslands seems to make an invisible barrier that even carnivores will not willingly cross, all prehistoric creatures seem to acknowledge it as a boundary.

This area makes up the vast majority of the plains and is home to a diverse group of prehistoric life and most of the towns that you will encounter. On this terrain there are small rolling hills but no great or sudden changes in elevation unless you are near a river in which case the tall grass will suddenly end at the water's edge. Weather is predictable in this area, usually being dry and warm during most months. During the winter there will be light snow and some ice, but the grass will continue to grow without regard which makes it easy to support the eating habits of herbivores in the area.

This area makes up less than 35% of the Great Plains and is indiscernible from the Flatlands at a distance. Only when the grass has been cut back or by walking directly up onto it will you see the ground giving way to a steep decline in elevation. These areas can go as far down as 200 feet and can span dozens of miles while the grass will still reach up high to hide the entire depression from view. In these areas you will never see snow collect and it serves as the living space for much larger varieties of dinosaur to include the Tyrannosaurus Rex and others that cannot easily conceal themselves on the Flatlands. Due to the grass reaching up so high in these areas the sunlight is often filtered green and the light seldom grows beyond a twilight during the majority of the day. Grass in this area often falls together and appears to bundle itself and take on the form of large tree trunks in areas where the larger dinosaurs have pushed through to make paths.

The primary plant that lives out on the Great Plains is called Traveler's Grass. It is characterized by being relatively plain grass that appears to grow just above six feet in height before stopping but it grows so thick that it completely blocks vision past ten feet. This grass grows year-round, even during freezing or drought conditions it remains strong and flexible, suggesting that it needs little in the way of water. The other unique property that it possesses is the stubborn habit to grow to the same height as any Traveler's Grass that it resides next to. Meaning that if you dug up full grown Traveler's Grass and put it in a bucket that elevated it a foot in height, the surrounding grass would slowly grow to that same height. The limitation of this trait is unknown because this is the trait that allows this grass to hide the Depths and make it appear to have the same elevation as the Flatlands when viewed from a distance.   The dinosaurs that live in the Great Plains are many and the ecology is such that the grass supplies nearly all dietary needs for the herbivore population which in turn supplies the carnivore population with food through abundant numbers.

Dinosaurs are the greatest natural resource of the Great Plains because of how they can serve as mounts and pack animals. In addition, they have valuable hides that can be made into light armor while teeth and bones are useful in weapon making and as components for various potions. Dinosaurs are often raised as a commodity from hatchlings though only a few species breed well in captivity which requires that strict laws about harvesting eggs and hatchlings be enforced so that the population stays stable.   Traveler's Grass is a hardy plant that can be easily turned into ropes or bound and twisted to be turned into long burning torches. This grass has few uses aside from being food for dinosaurs of the herbivore variety and a few select animals that can graze on them to promote the establishment of ranches.   There are a few metals that can be extracted through the use of pit mines in this area like iron, silver and gold in limited quantities for instance, but the area is almost completely devoid of precious gems. The valuable metals that can be found in this area with an innate magical quality include: Flare Steel (very abundant), Zing Steel (moderately abundant) and Hush Steel if the mine extends deep enough (rare).   While high fences are not enough to keep predators away humans still are able to make relatively successful ranches to raise domestic animals that are not dinosaurs to include cattle, sheep, goats and other livestock but horses are not raised in this area because they are of little use. Ranches are difficult to maintain on the outskirts of the empire because of predators and pillaging goblins so you will often see ranches and farmland closer to the center of the empire or near large settlements where adventurers or townspeople can be hired for protection against predatory dinosaurs. 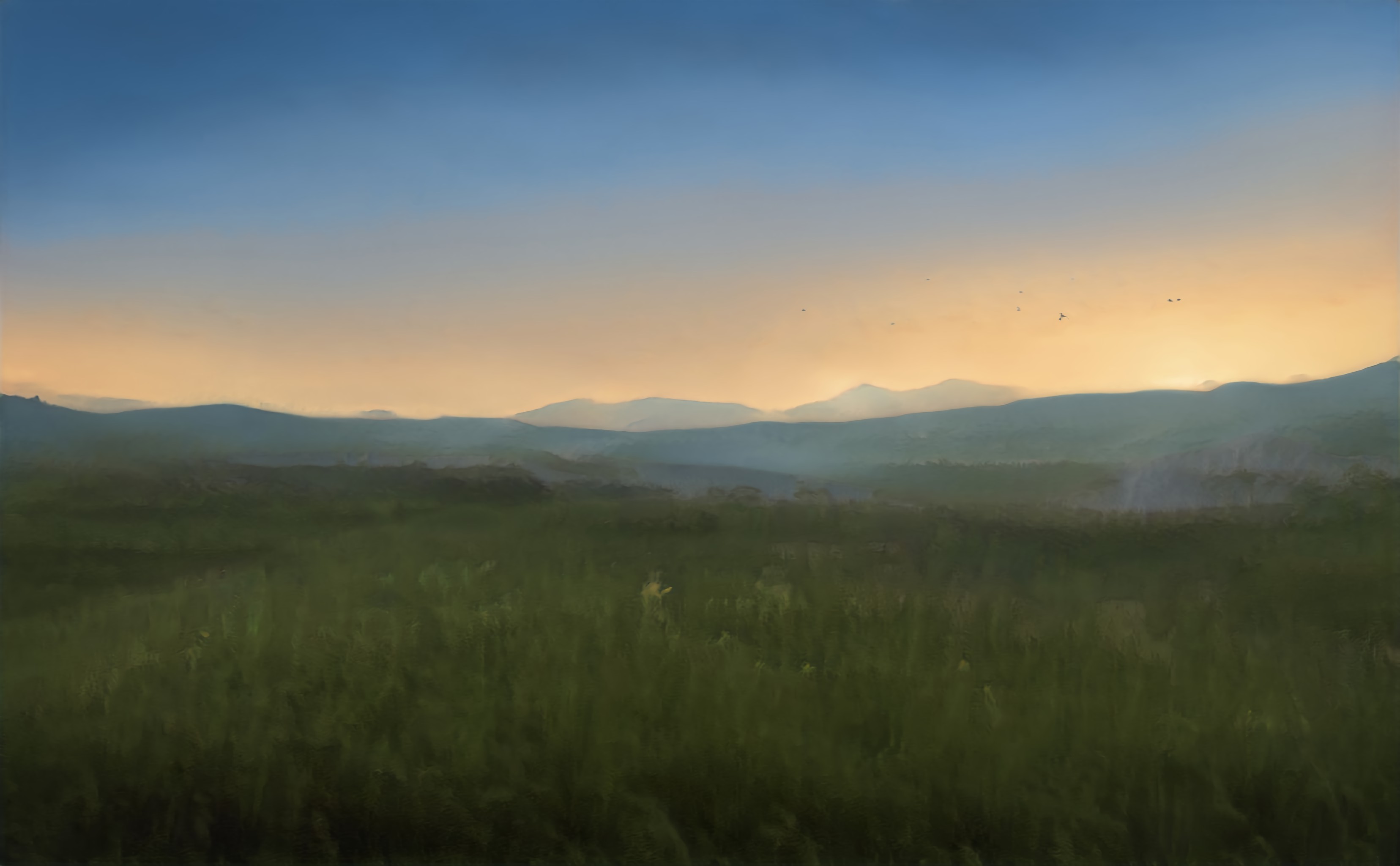