Cave of the Ancient Fey

The sound of water echoed against the walls of the cavern, drawing those that passed into the heart of the cave. The entrance into this unknown cave shimmered with magic, almost as if its appearance was fickle, hiding from those it did not find worthy of the beauty within. The walls inside dripped with crystalline drops, seeming more like the jewel caves of the mountains and Underdark than the simple caves found buried beneath the hills in the Fairy King's Wood. As one walks deeper, the sound of the water becomes louder, drowning out all other senses with the musical babbling of a large marble fountain that rests in the center of the cave's largest chamber. 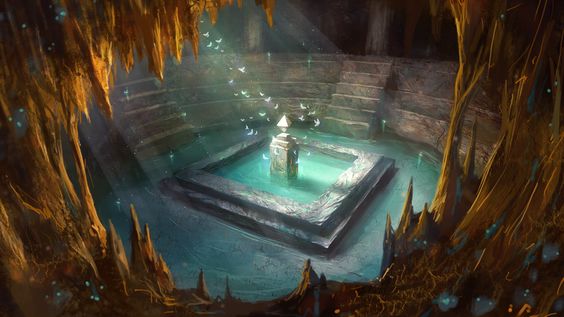 Temple Ruins by Alex Tooth
The flow of water from the fountain is perpetual, never stopping, even when droughts change the greenery of the forest to yellows and browns. It's water is clear and endless, showing the gems embedded in the fountain floor as if through a mirror. The stones at the base glow with a magical light, shifting through a rainbow of colors, pulsing like a heartbeat, slow and rhythmical. Sometimes the colors illuminate the fountain fully, allowing the runes etched into the walls surrounding the fountain to be seen.   Upon closer inspection, the runes on the walls are far beyond what any person can read. While the markings have the delicate motions of Sylvan , the runes are of no known language, reaching into the far past of Isekai and the magical races that called the world home in the early days of the Elder and Divine Races. A trained eye may make note that the delicate etchings are possibly those of the Ancient Fey, but no more information can be gained from the lines of runes.   As one stares at the walls, the fountain alights in blue, highlighting a series of runes etched deep into the marble of the fountain. These etchings are not as neatly defined, perhaps being carved by hand instead of the magic that so easily created the cavern and its walls. Those that cannot read the fey language of Sylvan find themselves at a loss, but those that can read the delicate shapes know the words to be a warning from some long forgotten traveler.

Warning on the Wall by Eladrin Font by Pixel Sagas, Phrase by RiverFang
The warning etched into the fountain is odd in its wording, often being ignored in favor of the curiosity of those that stumble upon the fountain. The water shimmers with magic, the cave hums with ancient spells cast deep into the stone. Many cannot resist the temptation of the gems or the water, often ignoring the warning in favor of their own greed.   Those with ill intentions will soon realize why the cave is fickle in its appearance. They will soon realize why warnings line three walls of the cavern. A single touch of the water with greed in mind brings the one with such intentions to a place of wonder and despair as the warning on the fountain said. The fountain will send you to the Feywild, the world of Ancient Fey so twisted and changed that many will never find their way out. Even so, the cave takes on the fickle and ever changing personality of the fey of old, its whims changing like the wind. Some may find the forbidden knowledge of the water of the fountain, but others still will find the knowledge of the Feywild and how that land treats those without fey blood.

The Cave of the Ancient Fey can be found within the Fairy King's Wood, although its exact location is unknown. Due to the fickle and ever changing nature of the magic that creates the cave, it tends to roam, only appearing sparingly and when the whim catches its fancy. This often causes those that stumble upon the cave to not understand what it is, but be drawn in by the magic of the place. Greed is often a factor in entering this forbidden place and attempting to take the forbidden knowledge that seems to be on offer.   The cave appears as a small, ornate entryway under a hill, often one that is lined with delicate flora. The doorway is marked by colorful marble and gemstones, something more akin to what can be found in the mountains and areas of the Dwarves. Through a short hallway, the cavern with the fountain is fairly large, containing a fountain that is the size of a small pond. The walls of the cavern is sheer stone faces, magically etched with the words of the Ancient Fey.

The water from the fountain is some of the purest water found on Isekai. It has magical properties, but these have not been explored as the magic of the cave itself often removes those who attempt to learn the reality of the fountain and its water.
Alternative Name(s)
Feywild Cave
Type
Cave
Location under
Fairy King's Wood
Ownership
Only the Ancient Fey of the Feywild can claim ownership of this magical cave, but even that notion is slightly out of place. The Cave of the Ancient Fey stems from the magic of the Feywild, but it was not created by any person or creature. It is an oddity that appeared with the magic, one that cannot be fully owned or changed. It shifts with the flow of magic between the two worlds, often appearing when mischief is most needed.

The Cave of the Ancient Fey serves as one of the many portals between the world of Isekai and the reverse world known as the Feywild. Slipping between the two worlds is often like falling through a thin veil, a movement between worlds that can be deadly depending on one's ancestry. Most of the entrances to the Feywild can be found in the Fairy King's Wood.

The Fairy King's Wood is a large forest south of the Feyline River that is home to the Fairies and many other fey creatures. The forest is quite magical, gaining its powers from the fey that call both the wood and the Feywild their home. The current fairy king is Festival Snix, a being of great magical power.

The Feywild is the reverse of the surface world of Isekai. It's lands are as far reaching, although much more magical than can be found on the surface. Home to the Ancient Fey, the Feywild is a shifting plane of magic and mischief, often changing on the whim of the seasons or those that lay claim to a certain area.