The Gateway of Aelinor Oaks

On the edge of two civilizations stands the lush green forest of the Amaratharr Valley. Here the sea of Aelinor Oaks that the Elven Forest is known for begins, allowing adventurers and travelers to whet their curiosity before plunging them into the depths of an ancient forest only miles outside the unsuspecting valley. In ways, the Amaratharr Valley is the gateway into the Elven Kingdom and its vast temperate forests, but if one wishes to find the sorcery the Elves are known for here, they will be greatly disappointed.   The lush valley lends itself more to the pursuits of the Outlanders, and less to those of the magical persuasion found deeper in Elven territory. The Outlanders live off the land and its beasts, hunting, trapping, and growing to survive. The infant trees of the Amaratharr Valley, many only fifty or sixty feet in height, provide cover for the small and large beasts that roam, many of which are as magical as the trees that hide them. These creatures roam free in the valley, living side by side with the Elves and Half-Elves that use them to survive.   The southern edge of the valley is marked by the flow of the Gweyr River into Lake Idryl. While this part of the valley is borderline in the Human realm, the Elves tend to claim the river as theirs until the calm waters turn into a roaring surge. The Humans have named the river and its lake something else in their garbling tongue, a point of contention between those that live on the edges of these realms. Even so, the waters of the Gweyr support the life of so much of the kingdom.   Without the magic and sorcery of the Jade Elves, the Outlanders developed irrigation in the valley, alongside their hunting techniques, to build the valley into a lush haven that it is. The Eldritch War that destroyed so much of the Kingdom and the continent had left the valley scorched and the trees felled. The infant trees lacked the magic of the ancients that kept the ancients from decimation, but the magic they held helped regrowth and the eventual return to fertile ground. 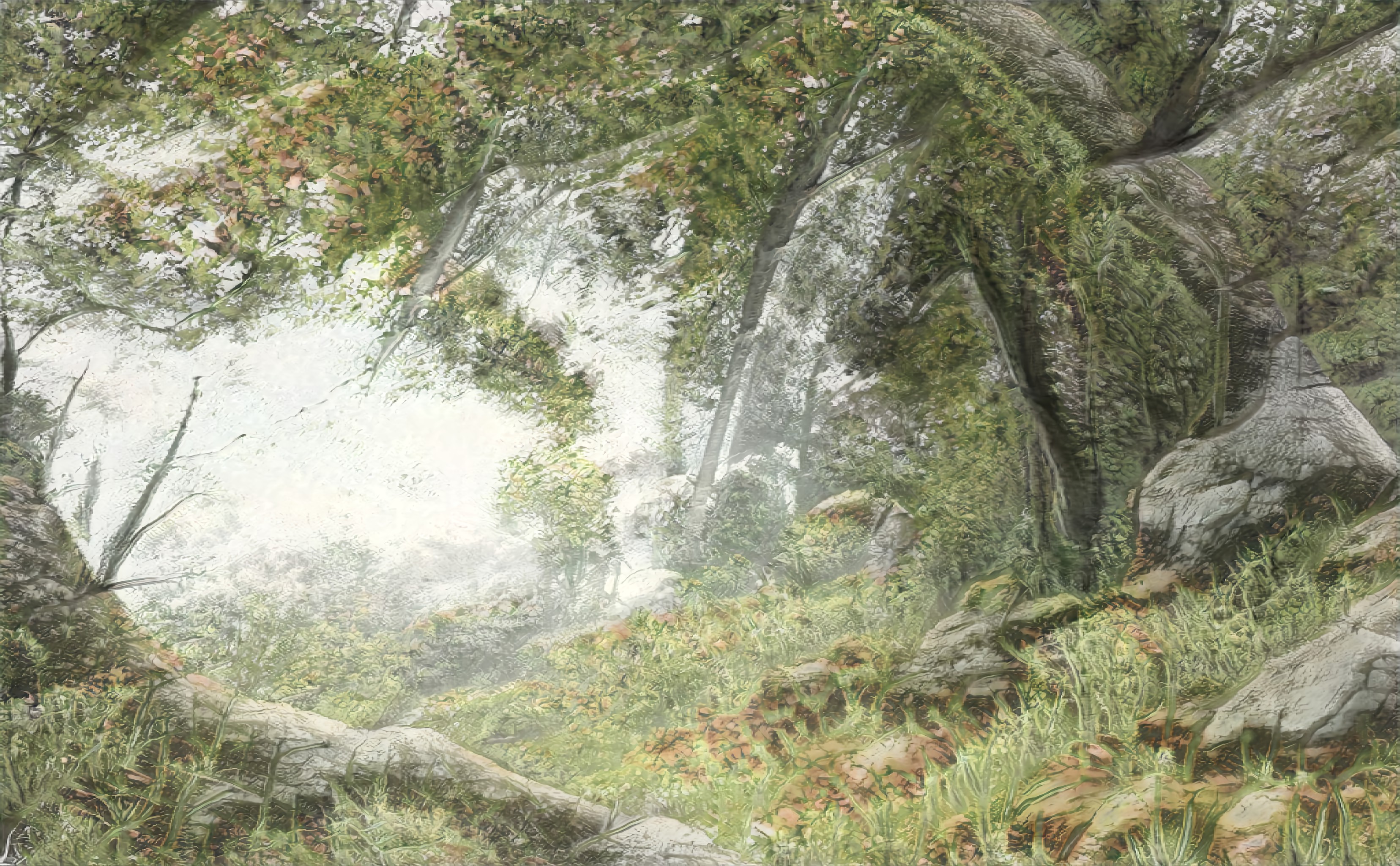 Amarantharr Valley by Landscape via Artbreeder, created by RiverFang
The Amaratharr Valley acts as a gateway to the Elven Forest from the banks of the Gweyr. This land is home to the Outlanders, a group that serves as hunters and stewards of the Aelinor Oaks.

The geography of the Amaratharr Valley is mostly a shallow valley with rolling hills, shaded by the leaves of a temperate deciduous forest. A large river, known as the Gweyr, runs through the middle of the valley, where it flows into Lake Idryl at the southern end of the valley.

The valley is home to a large temperate deciduous forest with trees mostly of a height of fifty to sixty feet. Throughout the valley can be found various herbs, medicinal plants, wildflowers, mosses, and other plants that can survive in the shade of large trees. A large majority of the animals found here are herbivores and find enough sustenance from the natural flora.   Animals in the valley range from small to large, including a large variety of herbivores and a few carnivores. Deer, elk, rabbits, badgers, and other forest creatures are common, as well as wolves, bears, and large cats. Due to the magical quality of the forest, the valley is home to other odd fauna that have been tainted and changed by the Elven magic.

The Outlanders are mostly hunter-gatherers and utilize as much as they can from the environment around them. While they do plant and grow some of their own crops, a lot of the food they consume comes from natural flora and fauna. Other crops, such as grain or corn, are grown in small fields close to the villages.   Homes in the village are built utilizing a mixture of wood, stone, and hides that can be easily gathered from the forest. These resources are utilized for a variety of everyday things that the Outlanders need and are augmented through a variety of small domestic animals, such as sheep and goats, that the Outlanders bring in from outside the valley.
Type
Valley
Location under
Elven Forest
Included Locations
Owning Organization
Outlands

The Amaratharr Valley is home to some of the most important locations to the Outlander Culture and their history. A culture based heavily on hunting, the Outlanders have hunted areas of the valley since the earliest days of the Elves. Ancient parts of the valley have now become the charge of the Emerald Elves as they care for the forest and its ancient history.

The Ancient Hunting Grounds are the oldest areas hunted in the Elven Forest. It is said that the Emerald Elves found their first homes in this area, kept here by the abundant herds that could easily feed a kingdom.

The Seraph Tree was once home to some of the Ancient Fey but was abandoned for some unknown reason. This tree has an odd magic to it, much stronger than other areas of the Elven Forest. Ancient artifacts are often found here, things that are important to the Outlanders.

The Seraph Tree was once home to the Ancient Fey that lived in the Elven Forest long before the Elves of today called it home. Originally standing as the center of the fey homeland, it has since been surrounded with the magical Aelinor Oaks & other trees.

Answering: "Describe a lush and fertile location in your world."
Visit RiverFang's Competition Page Check all other answers to this prompt Competition Homepage