Trees of the Fey

Aelinor Oaks are magnificent trees that grow hundreds of feet tall over the span of their centuries long lifespan. The magic within these trees makes them a specialty of the fey, grown through the magic of those of fey blood. In ancient times, these trees were kept by the ancient race of fey, the race that would one day give way to Elves and Fairies. As centuries have passed and the trees grew beyond measure, the Elves became their keepers when the Fairies' size became too much of a set back.   These oaks are often only found in the Elven realms, unless an Elf has gifted you a smaller version that they have cast spells upon to make it grow in small, intricate designs. Because of the time and magic needed to grow these oaks, the Aelinor Oaks are a gift unlike any other, an item that is treasured throughout much of Isekai.   The magic within the trees is grown through care, and very few of the Elves in the realm are chosen to be the keepers of these trees. Only the Emerald Elves of the Outlands are gifted with the honor, although many others call the trees home. Those chosen to care for the oldest of the Aelinor Oaks are thoroughly trained at the Unending Scroll before being sent out into the vast forests to care for a single tree. The ranks of carers are large, but the job itself is a solitary one.   Even without the vast magical networks that run through the forests and trees, the Aelinor Oaks are known for their hard wood and the various items that can be made from them. Only Elves are allowed to harvest woods from the trees, but the beautiful wood from the Aelinor Oak can be found throughout the northern continent of Vóreios as those on the edges of the Elven realms use the profits from the infant trees to help buy goods from other kingdoms. In some rare cases, the wood of Aelinor Oaks is also used for bartering amongst various Outlander tribes due to the various colors and patterns of wood that can only be found in select locations.

The Aelinor Oaks are known for the hard wood of varying shades of brown and tan. While the trees can have an unlimited number of branches, the number of branches is often in proportion to their height, with a fifty-foot oak having roughly five large branches with many smaller offshoots. The Aelinor Oaks as infants range in size from fifty to sixty feet tall, while some of the ancient oaks can be upwards of four hundred feet tall.

Aelinor Oaks reproduce much like other temperate deciduous trees, but some magic is required for a seed to take root. Seeds do not take root within the deeper parts of the forests, and often stray to the edges where infant trees are established. This allows the room necessary for the oaks to continue growing while the infant trees are utilized for building and other materials.

Due to the Eldritch War and the setbacks caused in growth to many of the oaks, the growth rates and stages of the Aelinor Oaks are still being researched by the Unending Scroll. The oaks have much longer lifespans than Elves, so very few of the trees have died within the current lifetime.

The Aelinor Oak fairs best in an environment suited for temperate deciduous trees. The oaks prefer temperatures ranging from about 86 degrees to -22 degrees Fahrenheit, with about thirty to sixty inches of rain per year. While these are optimal conditions, the magical network of the trees will aid in growth and survival if these conditions are not met.

The Aelinor Oaks begin to lose their leaves in the fall season and will regrow them in the spring season once it has warmed up. Due to the size of the trees and their many branches, the forest floor below is covered by a think weaving canopy even when the trees have lost their leaves.

The Aelinor Oaks are part of a magical network that is as intertwined as their root system. While the trees themselves have not exhibited magical properties outside of their large size and long lifespan, the various parts, to include wood, bark, and leaves, have some magical properties in certain cases. Not much is known about these properties, but the Unending Scroll dedicates some scholarship to these trees and their magic. 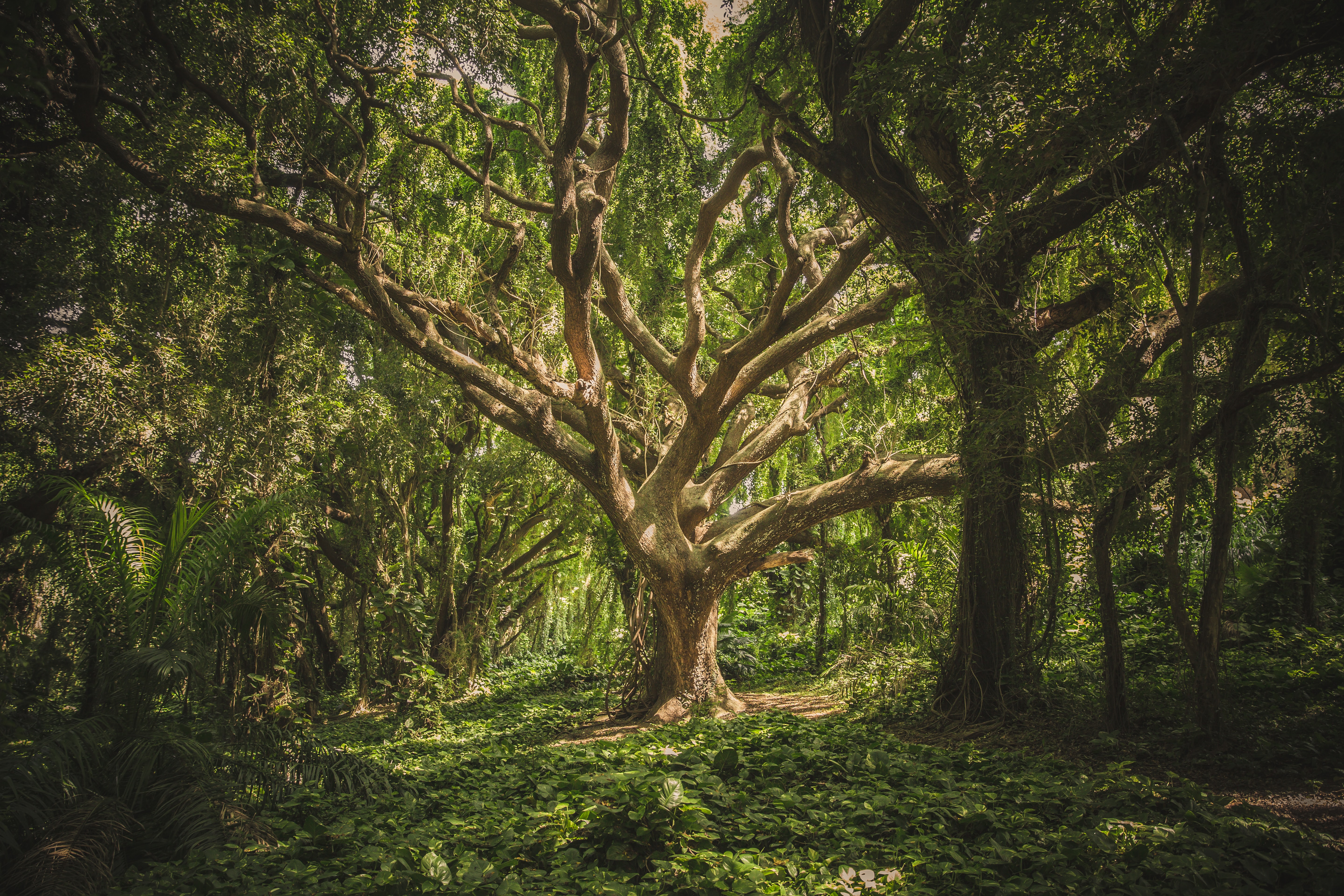 Tree in forest by veeterzy on Unsplash
Aelinor Oaks are some of the largest trees found in Isekai, often growing hundreds of feet tall. While they can only be found in the Elven Forest, the wood of these trees is coveted across the Northern Continent and has been known to be used as a bartering tool in some areas due to its high worth.
Scientific Name
Quercus Fae Aelinor
Lifespan
Centuries
Conservation Status
While the Aelinor Oak is not under protection or close to extinction, the care and protection of the ancient trees are seen as a position of honor in Outlander society and is held in high esteem by all Elves.
Average Height
50 to 400 feet
Geographic Distribution
Related Ethnicities

Hoofbeats mumble across the ground as the moss and grasses mute the heavy blows. Shadows weave through the trees, their antlers projected by the fading sun, stretching and twisting further than any one could grow.

Answering: "Write about an important plant in your world and what it is used for."
Visit RiverFang's Competition Page Check all other answers to this prompt Competition Homepage

Interesting read, and the art is superb, i'd see it as a header if it's big enough.   Are feys and other critters known to live and hide in the trees for magic attunement ? Does the land nearby and the soil gets different/affected by the size and energy demands of the trees nearby ?

If I'm understanding this right, the greater the care for the Aelinor Oaks the more magic they store? I think that's a really neat concept.