Scattered throughout the boughs of the Elven Forest, standing on the edge of the Neither Tundra, or hidden amongst the deep valleys of the Spine of Kallex, animals roam and scatter, plants live their cycles, but the Elves are ever present, shepherds and keepers of the land that was granted to them. Amongst the beautiful and harsh nature of the Northern Continent, Elves flourish and thrive, building an extensive kingdom fueled by magic and the gifts of the world around them.   Elves are the oldest of the Elder Races that live in Isekai, it is said that they are charged with the safekeeping of the forests, animals, and nature as a whole. Their role in the Eldritch War was a logistical one where their enchantment and healing magic supported those that had been afflicted heavily and the current Elven King Eladithas Cystenn drew the last stand line along the southern border of his Kingdom that he held. Elves are known to be fantastic woodsmen, powerful spell casters and they can enchant items permanently with the use of delicate writing or engraving.   Currently, they live in the forests, the mountains, the plains, and the sea. There are very few places where you will not find at least some Elf presence though the largest concentration of their population resides within forests. The capital of the Elven Kingdom, Alfensil, is a large Elven city centered around the oldest living tree in Isekai, the height of which allows one to see from the center of the Elven Forest, across the Spine of Kallex and to the Great Plains.

Elves can be found scattered throughout Isekai, but the largest population is found in the Elven Forest and the surrounding areas. Those that live in the more populated areas of the center of the Forest around Alfensil are often Jade Elves and focus their studies often on magic and its uses. Those that live on the outskirts of the Forest, in the Outlands, the Northern Outposts, and parts of the Spine of Kallex, are often Emerald Elves, ones that focus on hunting and the preservation of nature. Both types of Elves fulfill what is seen as their divine duty as given to them by the goddess Lycana.   Culturally, Jade Elves and Emerald Elves are very similar, sharing the same beliefs, heritage, and traditions, but some parts of their cultures diverge heavily from what is considered traditional Elven Culture. Because of this, their social structures are very different. Jade Elves tend to live in populous cities with large amounts of trade goods passing through. Emerald Elves prefer the quiet of small villages where it is a requirement to be able to fend for oneself. Even with these differences, it is not uncommon to see cities or villages that are a mix of Jade and Emerald Elves, although this is more common in the Northern Outposts.   Throughout the Elven Forest, culture and ways of life are often dictated by which gods that one follows. It is not uncommon to find an Elf that follows the beliefs of multiple gods, often bringing together similar beliefs that build a specific lifestyle. Lycana is followed by all Elves as their creator, but the Huntress and Ygg are also integral parts of the cultures of the Elves.

Elves are known for having mystical traits when compared to other races, which includes a natural inclination to learn magic and physical abilities that stem from their relation to the Ancient Fey.   Most varieties of the Elf species have exceptional hearing, they are usually built for agility and can navigate precarious environments both quietly and safely. Depending on the environment that they come from they will have physical traits linked to their environment, for example, Emerald Elves come from heavily forested areas and have a natural ability to hide with little obscurement. An Elf that lives in a city may find they have a natural inclination for magic and pick up minor spells by simply observing them and bypass the need for study.   Magic is a common trait shared by all Elves, but how it is used or what types of spells that are learned may be different depending on the variety of Elf. Emerald Elves excel at magic based in nature or spells useful for survival while Jade Elves may find better use of spells that expedite simple tasks and leave them free to study, research, or participate in other leisure time activities.   All Elves have some standard traits associated with their physiology that allow them to see in the dark, be highly resistant to charm or mind control effects, and cannot be put to sleep magically. The reason for this seems to be because of their relation to the Ancient Fey and they have shown a lack of need for any natural sleep. Instead, they can meditate for a few hours to recover their strength and rest. 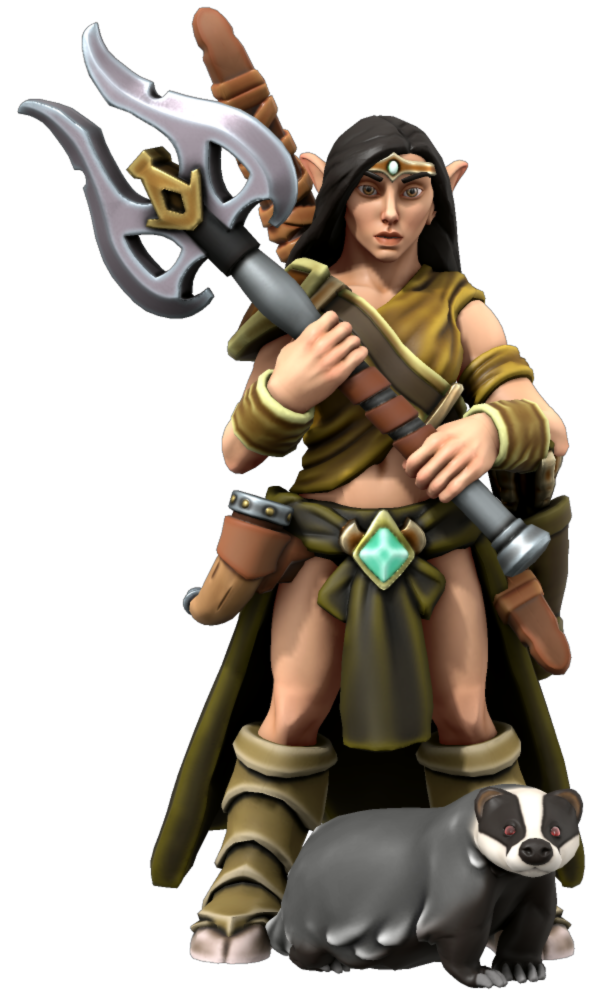 Emerald Elves prefer the quiet of nature over the bustling cities of the central parts of the Elven Forest. On the fringes, they serve as shepherds and protectors of the land given to them by the goddess Lycana.

Jade Elves are the more magically inclined of the Elves, choosing to live in large cities or highly populated areas and focusing on learning and training their magic.