Magic Folk of the Lost Paths

In places where the only light is the shimmering of gemstones or possibly luminescent moss, soft wings flutter and carry those that wander through the Lost Paths. Here, one may find horrors and twisted fairy tales, but the Deep Fairies call this place home and serve it as their life's work. In the chaos of the Lost Paths and the Wandering Forest, another of the descendants of the Ancient Fey carve their place.   Deep Fairies are an oddity and considered quite rare in the world of Isekai. It is said that they are charged with wandering the twisted routes of the Lost Paths as they weave in and out of Káto in the strangest of places. Their role in the Eldritch War is unknown as the Wandering Forest was a chaotic place during that time, Káto also, but as the two realms mixed in the Lost Paths, a place beyond chaos erupted, leaving history hard to track down. Deep Fairies are known to be speakers of the earth, they are reliant authorities on finding both minerals and gems, but they do it by listening to the whispers of the deep caverns. It is because of these strange "whispers" that they are able to traverse the most dangerous of paths with some semblance of safety.   Currently, Deep Fairies are native to the Lost Paths and Káto but they are rarely seen anywhere else in the world as many seem to think that they are messengers of misfortune or bad omens from the gods. Deep Fairies are lone travelers, preferring the safety of speed and stealth over large groups or caravans and they swear allegiance in passing to the Ancient Fey whose domains that they inhabit for a time before taking to the open road again. The Deep Fairies have no grand cities or capitals on the material plane but it has long been accepted that they do have a special meeting place, a dimension that is hidden and tucked away between the crevices of long-forgotten caverns where they gather called the Crystal Crossroads.

All Fairies share anatomical traitsi with Humans, although Fairies often have the stature of Halflings. The Fairies' defining feature is their wings, which they do not receive until their 200th birthday. The various subraces of Fairies have different types of wings.   Other than their wings, Fairies have innate magic that stems from their fey ancestry as well as the areas where they live. All Fairies can resist certain magical effects and have the ability to impart magical abilities to creatures by granting them a name.   Common Colorations
While Fairies are anatomically similar to Humans, Deep Fairies are more similar in appearance to the Gem Dwarves and Silver Elves that call Káto home. Their skin can range in color from a pale grey to a dark black while their hair is often stark white to a silver color. The color of their eyes is often shades of purple, grey, bright blues, or even a deep red.

Deep Fairies are one of the few races in Isekai that lack some form of social structure as they do not have a designated homeland. These people tend to wander the Lost Paths and Káto, only meeting together at the Crystal Crossroads during important occasions. Otherwise, Deep Fairies are solitary travelers or may travel in small groups of two or three, but often prefer traveling alone so as not to interrupt the flow of the Lost Paths.

Deep Fairies are known for their connection to the underground world, they are one of the few civilized races that call the Lost Paths home. They are people that delight in mapmaking, exploration, stories of grand adventure and they have a love of change that seems unnatural to most other species.   The most defining trait about Fairies is their ability to fly, even before their wings appear they have this trait and later in life, they become stronger fliers. Deep Fairies have wings that appear to be made completely from gemstones, they have been described as the most illustrious stained glass windows that give off a glow even in total darkness. They also have a natural connection to earth-based magic which allows them to displace earth, disrupt its formation and solidify it without any formal training. Scholars theorize that their evolution in the Lost Paths granted them this ability and gave them the ability to manipulate some earthen materials based on their emotional control.   All Fairies have traits that allow them to resist the effects of falling under magical charms, being put to sleep and their physiology allows them to see quite well in the dark. They have these traits across the entire race regardless of the environment that they reside in courtesy of their close connection to the Ancient Fey. However, they lack the ability to meditate as a form of sleep as the Elves do, instead Fairies require a full state of rest and this fact has caused many scholars to question how their race developed differently despite their intense connection to magic. 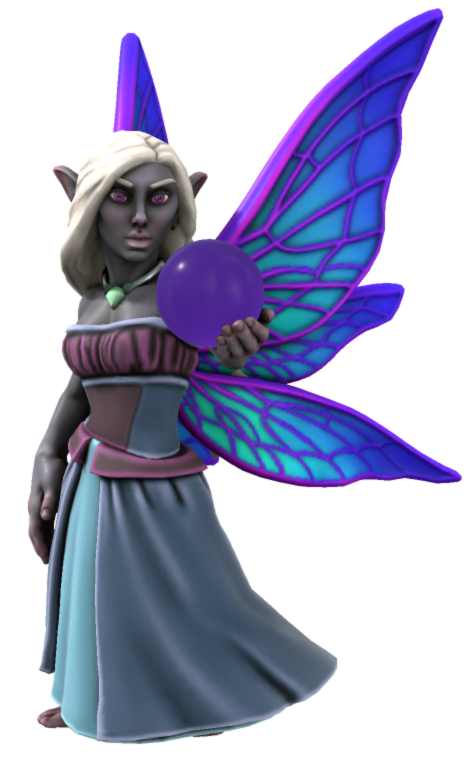 Deep Fairy by Model via Heroforge, created by RiverFang
Deep Fairies are wanderers, rarely making their home in one place. They often travel through the Wandering Forest and the Lost Paths, sometimes convining at the location only known as the Crystal Crossroads.
Genetic Ancestor(s)
Origin/Ancestry
Fey Ancestry
Lifespan
1500 years
Average Height
3 - 4 feet
Related Ethnicities

These sound like a really interesting race. I love how you've described the appearance of their wings. :)