Fair Folk of the Depths

The wandering tunnels and large caverns of Káto hide many secrets, from creatures that have never seen the sun, to twisted magic that flows through from the Lost Paths, all things that most are not strong enough to handle. Those that call these bleak areas home must be stronger than most, of both body and mind. Miners, Mapmakers, and Adventurers wander, but it is the Warriors, the Silver Elves that live here permanently and excel about the creatures that wish to expel them.   Similar to their surface-dwelling brethern, Silver Elves choose to call the darkness of Káto their home. Their role in the Eldritch War is considered to be one of the more gruesome yet in many ways they were more prepared than most of the races in Isekai. The Silver Elf cities and their militaristic mindsets ensured their survival against the horrors that grew in strength during to the war. To an outsider, they would appear to have lost little, if anything during the war. The Silver Elves have long been the strongest race in Káto and they fought for that title. Since they have existed, they have acted as guardians and hunters of the tunnels and caverns deep below Isekai where they encounter beings of Eldritch origin on a daily basis.   Currently, Silver Elves live throughout Káto and can be found as nomadic travelers throughout the world as oddities. There are many places that may be unfamiliar with Silver Elves except by name or through stories as they are considered rare and somwaht mystical or exotic if not feared or respected. One of the most powerful organizations of Silver Elf society is known as the Parallel Monastery, here a variety of Monks are trained separately from the rest of Silver Elf society and they are considered elite beyond even weapon masters of the ruling houses of Silver Elf cities and is the closest thing to a capital or uniting structure that exists in Silver Elf society. Silver Elves from the Parallel Monastery are called Ishtin Kex. Both are feared and considered cursed by most of Silver Elf society for their power and training methods.

All Elves, including Silver Elves, share anatomical traits with Humans, although unlike the Elves of the surface, Silver Elves tend to have darker colorations and some special sensory abilities that come from living in the deep tunnels of Káto.   Their appearance, including pointed ears, lithe bodies, and a innate ability to perform magic are heavily influenced by their ties to the Ancient Fey. In this way, the Silver Elves are rather identical to the Elves of the surface.   Common Colorations
While Silver Elves are nearly identical to Elves, they share their appearance with the Gem Dwarves and the Deep Fairies that also call Káto home. Their skin can range in color from a pale grey to a dark black while their hair is often stark white to a silver color. The color of their eyes is often shades of purple, grey, bright blues, or even a deep red.

Silver Elves are not united under a single kingdom, instead choosing to live in scattered city-states that often have their own ruling councils. This culture is matriarchal and are heavily invested in the beliefs of the Huntress, who has tasked the Silver Elves with the hunting of creatures in Káto that have no right to be there.   Politics and family structures are constantly in flux in Silver Elf cities as certain families and Matron Mothers attempt to gain some sort of power, but by no means are all Silver Elves hungry for power. Their society is wary of outsiders and rarely let others in to witness some of the things that are common there.

Silver Elves are known for having mystical traits when compared to other races, which includes a natural inclination to learn magic and physical abilities that stem from their relation to the Ancient Fey.   Silver Elves are considered a highly specialized species of Elf though they appear to have no true common ancestor if the creation stories of the Elder Races are to be believed. They have an inclination to magic involving light and darkness that other Elves do not exhibit, this appears to stem from their natural environment. Káto has also left them with a physical weakness to sunlight which prompts members of this race to shield their eyes in the presence of bright light and be unable to function easily in full sunlight without the use of some device to block out the sunlight from their eyes.   Silver Elved have some standard traits associated with their physiology that allow them to see in the dark much further than other Elves, be highly resistant to charm or mind control effects, and they cannot be put to sleep magically. The reason for this seems to be because of their relation to the Ancient Fey and they have shown a lack of need for any natural sleep. Instead, they can meditate for a few hours to recover their strength and rest. 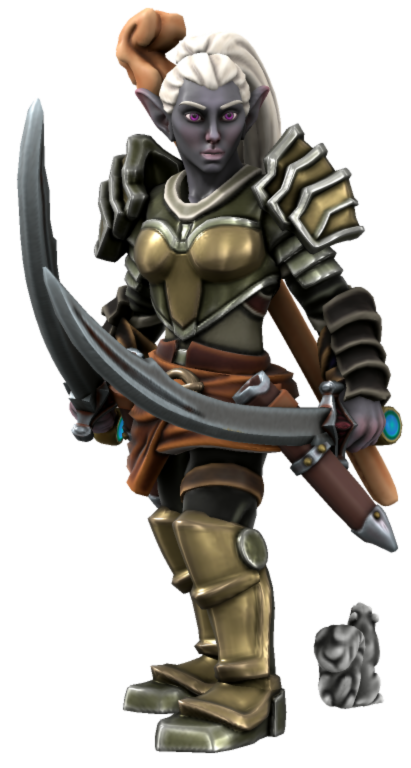 Silver Elf by Model via Heroforge, created by RiverFang
Silver Elves are one of the few races of Isekai that call Káto their home. As followers of the Huntress, they seek to rid their homeland of the creatures that have crept in and cause chaos.
Genetic Ancestor(s)
Genetic Descendants
Origin/Ancestry
Fey Ancestry
Lifespan
750 years
Average Height
5 - 6 feet
Related Ethnicities
Related Myths
Related Materials
Reasonable Races

Really interesting article - I like that lying is taboo for them.