The stars glitter and shine as their places are marked meticulously on a star chart, their movements helping determine prophecy and the fates. More notations are jotted down, anything that may be necessary for another to read the chart and determine what the movements of the stars mean for those that dare ask. Most often the fates are kept close and prophecies quiet, but some still believe they should ask the Centaurs for their readings and laugh at the foretold outcomes.   Centaurs are distant descendants of the Ancient Fey and a tribute to the varied forms that they have taken over the centuries, it is said that they have charged themselves as the keepers of prophecy and charters of the stars as they move throughout the heavens. Their role in the Eldritch War was a small one, they foretold the doom that was to come but they were unable to determine much of the specifics and many kingdoms petitioned their gift of divination and knowledge of the stars to determine the course of their battles. Centaurs are known to be powerful, stoic people that are powerfully built and have the ability to make long pilgrimages over inhospitable lands so that they can chart stars, visit mystical places of the world, or simply watch history unfold.   Currently, the most prominent place that they live in is the Elven Forest, they can be found in pairs wandering about the world of Isekai for purposes that they seldom disclose. They appear to enjoy areas that have not been heavily improved that support a host of healthy plant life, such as large trees or even wide plains seem to be enjoyable places for them to settle. They currently have no organized country or self-sufficient cities but they seem content to form nomadic tribes that have good relationships with the Outlanders of the Elven Kingdom.

Centaurs can be found scattered throughout Isekai, but often prefer the open plains and forests of the Northern Continent. Large concentrations of these people can be found within the Elven Forest and the Cradle of Clay, amongst people that respect their divination without abusing its usage. They often live in small tribes, numbering thirty at the most, removed from large cities or other villages.   Culturally, the various types of Centaurs are rather similar, although their size and other traits from their horse half do dictate differences. These people do not live separated based on their horse half but choose to build mixed communities that have productive members that add to the collective. While they do keep to themselves, these villages attempt to bring value to the area in which they live and benefit the kingdom or country they are a part of.

Centaurs are known for their unique physique of having the top half of a humanoid species that most often resemble Humans and the bottom half that most resembles a horse species. This strange appearance is tied to their distant relation to the Ancient Fey though there is much debate as to which of that race first took and kept the appearance that Centaurs are known for today.   Most varieties of Centaur are distinguished through their natural builds, the species of horse that makes up the bottom half seems to have a determining factor in how muscular or large the appearance of the humanoid half is. Larger breeds of horse resemblance give way to Centaurs that are as broad as Clay Giants while smaller breeds of horse resemblance will still be built powerfully but their humanoid half may have the proportions of a Dwarf. Despite whatever appearance a Centaur has, they all have the trait associated with their language and a natural inclination towards learning to read the stars, though even with that natural inclination they still dedicate their entire lives to mastering it.   All Centaur have traits that they share such as the natural carrying capacity associated with a horse, even weak members of their species can shift or pull incredible loads that another humanoid creature would struggle with. Their horse half also allows them to move faster than other races naturally which make them well-suited for long journeys. In addition, their hooves can be used as deadly weapons if they choose to knock down and trample an enemy. 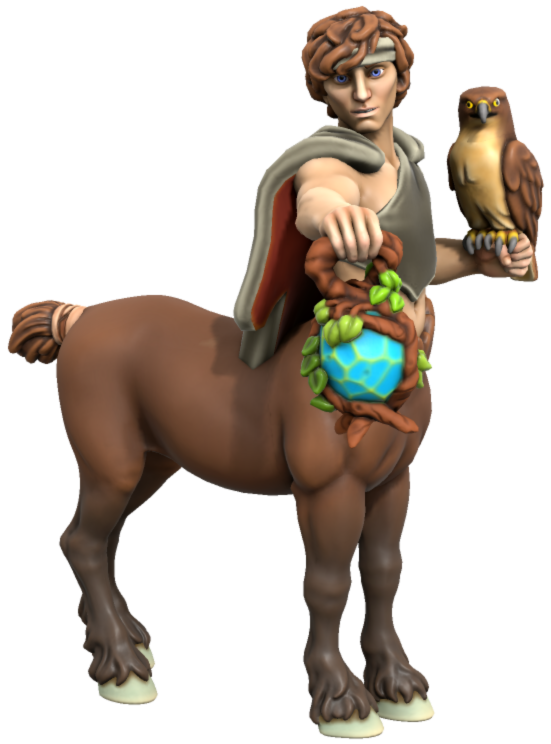 Centaur by Model via Heroforge, created by RiverFang
Descendant from the Ancient Fey, Centaurs often serve as the keepers of lore and prophecy, looking to the heavens and the past for the knowledge they gather and share with those that are fated to.
Genetic Ancestor(s)
Origin/Ancestry
Fey Ancestry
Lifespan
80 years
Average Height
6 to 8 feet tall
Related Ethnicities

I love the idea that their coming of age is decided before they have seen their first star. That's a cool little detail about their culture.