Hardy Folk of the Hills

Plains and hills lush and waving with plants aplenty, many grown to feed the tribes that wander with the animals they have painstakingly bred for traits that are helpful and survive the harsh reality of winter and the sometimes scorching days of summer. Amongst the rolling hills, herds roam alongside the people, building far-stretching communities that are tied together with the oral traditions of their people. Magic runs rampant here, bursting forth from the Arcane Geysers, but the people of this land prefer the hard work of agriculture and animal husbandry, a far cry from the specialties of their warring ancestors.   Clay Giants are one of the many Giantkin, but their place in the Giants' Hierarchy was removed long ago during the Removal of the Weak. These smaller Giants are considered lesser kin like Trolls and Ogres, but not nearly as unfriendly. Since their removal from the Hierarchy, the Clay Giants have made a name for themselves tending the Arcane Geysers that perpetually gush the magical Arcane Dust from the ground. Their role in the Eldritch War was to supply the races with shipments of Arcane Dust and to support the the defense of grand supply lines with their mastery of oversized weapons. The Clay Giants primarily allied themselves with the Human Empire, a strong bond that stands even to present day.   Often the Clay Giants tend to favor the mountains and high plains of the Cradle of Clay but it is not uncommon to see solitary travelers of the race in any part of the world except Káto where the Clay Giants avoid traveling due to the cramped tunnels. Their society is made up of many tribes that gain influence based upon the Vollan Rue, games held every three years. These people excel in feats of physical strength, but they are also known for their exceptional oral traditions as well as their work and advancements in plant and animal husbandry.

Clay Giants share most anatomical traits with Humans, but Clay Giants are much larger and often have a great density in terms of muscle. Their body tissues also innately are resilient to the cold. Oftentimes, Clay Giants stand a good two feet taller than Humans with a naturally powerful body and arms that seem to be slightly too long for their frames. They also have an almost unnatural strength that identifies them as a descendant of the Giants which allows them to perform feats of strength beyond creatures that would rival their size.   The final and most notable trait of the Clay Giants is their durability. The bones, muscle tissue, and organs of a Clay Giant are more pliable and can take substantially more trauma than even the sturdiest of Dwarves from the Great Furnaces. This was once thought to be an inherently magical trait, but it was later discovered to be a secondhand effect of exposure to the Arcane Geysers. The Clay Giant physiology was naturally suited to absorb the Arcane Dust over many years and eventually they developed a toughness without the need to learn or manifest magical abilities.   Common Colorations
Clay Giants are very similar to Humans in terms of their appearance, although they often look like extremely oversized Humans. Their skin ranges from pale white to a deep brown or nearly black in color, although the darker skin colors are often attributed to their long hours in the sun. Their hair can be shades of blonde, red, brown, black, or stark white, but often the lighter shades denote age. The eye colors of the Clay Giants are not as varied as those of Humans, but shades of blue, green, brown, gold, and grey are common.

Clay Giants can be found nearly everywhere throughout Isekai, except for Káto, but prefer their homeland in the Cradle of Clay. Here, Clay Giants often live in small villages or prefer a nomadic lifestyle. No matter where a Clay Giant lives, the social structure of their people is dictated by influence gained during the Vollan Rue.   The Cradle is the governing body of the Clay Giants, often made up from representatives of the tribes that gained great influence during the latest Vollan Rue. Essentially, the group is made up of tribal elders that make decisions and help build alliances and other relations with the various countries and kingdoms in Vóreios. Outside of this group, the individual tribes often have their own group of elders that serves to keep the peace and aid the people of a tribe or village.

Clay Giants are not known for their magical abilities, but rather their physical ones which will put most other races to shame despite not being all that much larger than them.   Clay Giants have naturally strong bodies which give them a natural inclination for sport, hunting, and physical labor of all kinds. While not specifically trade-oriented outside of agriculture, they are incredibly strong which allows them to build large structures and wield oversized weaponry. They can travel to incredible heights with thin air above 20,000 feet and suffer no consequences from the sparse air or the cold weather. Clay Giants also seem to be able to shrug off even deadly wounds with little more than determination. 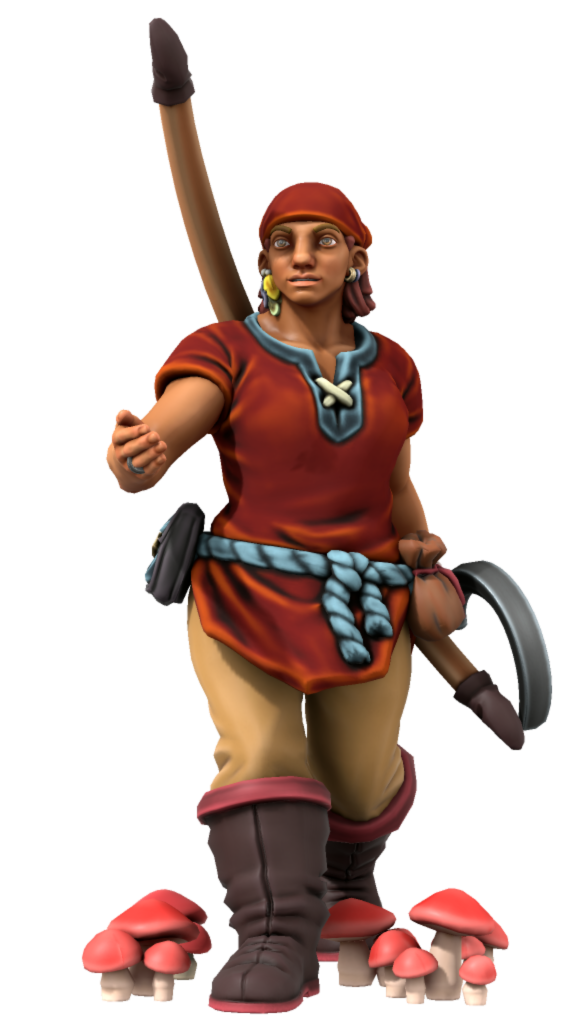