Deep within the mines and mountains, the sounds of picks and hammers ring out against the hearty stone, chiseling away at the rock face in search of ore, gems, wealth. Here is these busy tunnels, one will find the Dwarves of the world, toiling away at their craft, mine, creating, becoming Master Dwarves at one of many trades. Amongst the tunnels of the Great Furnaces and Káto, the Dwarves thrive as craftsmen, the best the world has ever known.   Dwarves are the youngest of the Elder Races that lives in Isekai, it is said that they are charged with the secrets and skill of metalworking and craftsmanship. Their role in the Eldritch War caused strife between them and the Humans because the Dwarves chose to take a defensive posture, holing up in their mountains and underground kingdoms to wait out the travesty instead of assisting the other races of the land in their fight. Despite this action, they were not absolved of all conflict and still faced their own trials in their tunnels and underground cities. Dwarves are known to be sturdy fighters and expert blacksmiths, able to create alloys from the mystical metals of Isekai with ease.   Currently, they live in the mountains and deep underground though it is not uncommon to encounter them on trade routes. Dwarves are not uncommon people in the world, they will find work as smiths and tradesmen anywhere that they can find payment for their skills but their population is largely centered around the Great Furnaces. The Capital of the Dwarves is called the Sapphire City and currently boasts the largest deposits of precious metals, jewels and adamantite in Isekai. It is said to be the finest place to procure weapons and armor because of the alloys that can be created by the Master Dwarves that populate the city.

Dwarves can be found scattered throughout Isekai, but the largest populations of Dwarves are found in the Great Furnaces and certain areas of Káto. Those that live in the tunnels of the mountains are often Iron Dwarves and focus their lives of craftsmanship and metalworking. Those that live in the caverns of Káto are normally the Gem Dwarves, those that dedicate their lives to gems and trade. Both types of Dwarves spend their lives crafting and plying a trade, reaching skill levels beyond other races.   Culturally, Iron Dwarves and Gem Dwarves are very similar, sharing the similar beliefs, heritage, and traditions, although the two have separate kingdoms. The Dwarven Kingdom rules over all Dwarves that live in the mountains while the Kingdom of Gems rules over all Dwarves that live in Káto. It is not uncommon to find areas where Iron and Gem Dwarves mix, especially in areas that are close to both kingdoms such as the Great Tunnel.   Mining, metalworking, and their belief in the god Crommel unite Iron and Gem Dwarves. Other than appearance and where they chose to live, very little separates the two. Two kingdoms only exist as it would be nearly impossible for a single person to rule over those that lives beneath the mountains and those that live deep in the caves.

Dwarves are known for being practical and stout people that are capable of surviving many a hardship. They often have peculiar abilities that enable them to be miners, craftsmen, and excel at living a life underground.   Most varieties of the Dwarf species are naturally hardy and have stamina that outlasts other races when hiking, working, or fighting. They are strangely resilient against poison and many ailments, and almost always have an interest in stonework as it seems to be a foundational skill that most in their culture pursue at some point in their life. Depending on the environment that they come from, a Dwarf may have additional traits that make them more suited to working and fighting in that environment, but these traits seem to come in the form of more natural hardiness of intuition and lends more to their combat ability in a raw contest of physical might.   All Dwarves appear to have the trait that allows them to see in the dark and they possess an unexplained inclination to a profession or a type of craft. A Dwarf may simply pick up a set of tools or a smith's hammer one day and exhibit natural prowess that will make a veteran of ten or twenty years marvel. These physical skills seem to stem from an innate trait that their physiology possesses which allows them to learn certain skills more easily than other races. 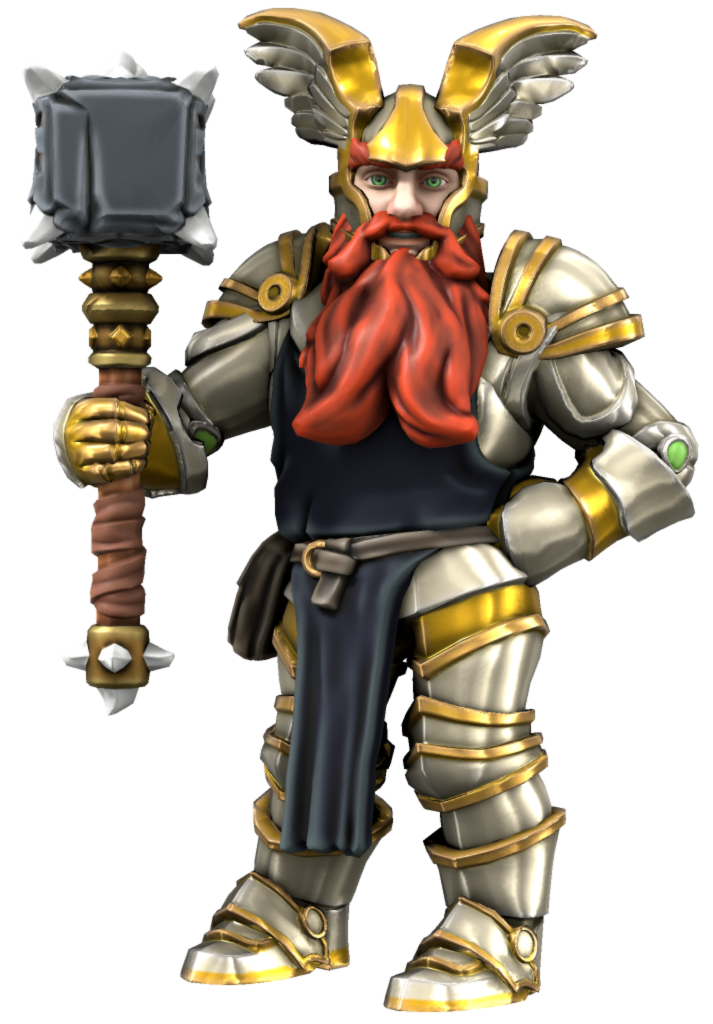 Dwarf by Model via Heroforge, created by RiverFang
Dwarves are the most well-known miners and crafters of the world, tinker with alloys made from the special metals of the world as well as working with Adamantite.
Genetic Descendants
Lifespan
350 years
Average Height
4 - 5 feet
Related Ethnicities
Related Myths
Related Materials

Gem Dwarves are very similar to the Iron Dwarves of the surface, it is said that they came about from the story of two brothers where one loved gold and the sun more and one loved gems and the warm, dark caverns under the mountains more.

Iron Dwarves are the more well-versed metalworkers of the Dwarves, choosing to utilize the materials and ores that are commonly found at the depths they make their homes.