Goddess of Nature & Mother of All Things Fey

Lycana is a powerful goddess that is associated with nature, life, and arcane power. She has a few names among the Fey and the Elves, her beloved children or those that are more easily identified as hers, to name a few she has been called: Mother Nature, Gaea, Fey Queen, and Elven Thief. Lycana belongs to four separate Pantheons due to her role in the creation of numerous living creatures, these are known as the Pantheon of Nature, Pantheon of Life, Pantheon of Trickery, and the Pantheon of Arcane. Lycana is considered to be the pinnacle of the Pantheon of Nature and is revered by the greatest amount of creatures in Isekai along with being one of the most powerful gods in existence if not the most enigmatic. She is depicted in two ways, the first being as a beautiful Elf woman under the light of a full moon while the second is as a shapeless shadow that waivers and flows from tree to tree in the darkness of a deep forest. The true form of Lycana is unknown and appears to be undefined in most religious texts and stories unless she 'chooses' to take a form, this has led to some broad followings using the moon as a symbol for Lycana.   Her tenets and standards involve care, abundant emotion, beauty, and a life lived as one with nature whatever the environment might be. The attitude of Lycana is hard to learn and hardly an intellectual study, rather she is best understood through a connection with nature, music, and emotion. Spending time among her children might also yield some answers but these are best perceived over the course of a lifetime for there is no road map to the Wandering Forest and no guidebook that shall explain the mysteries that constitute life, happiness, or sadness. Those that would worship Lycana or ally themselves with nature must live full of passion and without reserve, all that call upon her are accepted as "Lycana's Children."

Lycana is involved in four different domains due to her role in the creation of plant life, creatures, and even intelligent races. In order of relevance, she is associated with the Pantheons of Nature, Life, Trickery, and Arcane. Her followers are diverse whether they be common folk, Paladins or Clerics and their specific domain of worship does not concern her but rather how they life and the nature of their hearts. Wherever Lycana is revered her followers will emphasize on any number of her attributes, most commonly her connection with nature or as a maternal figure.

Lycana is considered the pinnacle of the Pantheon of Nature, she is the mother of everything in the wild from the plants to the Fey and the magic that radiates from the environment itself. As the pinnacle deity, she holds absolute supremacy over nature and her followers will call on her for everything from agriculture to navigation, hunting to childbirth, attempting to achieve oneness with nature to emotional clarity. All other gods are considered more specialized or outright weaker when compared to Lycana when it comes to the broad topic of nature. When it comes to nature her focus is on living through instinct, connection with emotion, oneness with the natural world and vibrancy.

Lycana is considered to be a god within the Pantheon of Life because of her role in creating and encouraging the growth of plants, animals and more than a few races in the modern world. When it comes to aspects of the life pantheon her influence is strong and brings hope to those that are cursed, sick or striving to overcome death with primal strength or vitality. When it comes to life her focus is on overcoming, instead of just surviving she places importance upon living and flourishing which is the strength that most of her followers in the discipline will call upon her for.

Lycana is considered to be a god within the Pantheon of Trickery because of her affinity with the night, the moon, stealth and the enigma surrounding her true form. When it comes to aspects of the trickery pantheon her influence is often seen in Elven Rangers and Silver Elves that stalk the depths of the mountains for evil to subdue. When it comes to trickery her focus is on invisibility, disappearing into the shadows and changing shape completely to obscure one's original form.

Lycana is considered to be a god within the Pantheon of Arcane because of her role as the original Witch, a being of strange power that many Fey covens have been organized and dedicated in honor of. When it comes to aspects of the arcane pantheon her influence is often seen in the Sorcerers bloodlines of wild magic, certain Witch covens, Druids and those that tie themselves to a patron of the Ancient Fey. When it comes to the arcane her focus is on unpredictable outcomes, the spontaneous generation of life, curses as well as blessings and shape-changing.

The exploits of Lycana are passed down as oral tradition in most cultures though there are two official transcriptions about her that could be called religious texts. The first of which is a large stone carving in the side of a rocky overhang found north of the Great Plains, in the Cradle of Clay. This structure is carefully guarded as a religious area by various tribes of Lycanthropes when the moon rises to its highest point the shadow cast will present the exploits of the goddess in silver letters upon the ground through the lines of song. As the night goes on the letters shall change shape and continue the ballad, this song changes from moon to moon and season to season in order to present not only historical details but the details of her visits to the physical realm. This structure is said to be the creation of Wanderer Elves that found themselves lost outside of the Wandering Forest but became enamored with the beauty of the moon in the physical realm, they took the time to transcribe their stories into the rock before finding their way home.   The second record of Lycana's exploits is found within the carvings of Yggdimil, the oldest among the Ancient Fey and revered as a demi-god by many. This tree contains carvings placed by its siblings that detail the exploits of the goddess and her many visits to the physical realm. This is considered to be the source of the stories found on the stone carvings in the Cradle of Clay but there appear to be some inconsistencies, either through omission in carvings on the tree Yggdimil or wearing away of the rock in the physical realm. In order to gain the complete collection of stories associated with Lycana, it would be required that one travel to both realms and spend a great deal of time researching these sources.

The primary symbol of Lycana is the full moon, usually created by using polished Silver or in rare cases Mithril. Other symbols always include the moon in a different phase, the two most common are the full moon and the waning crescent moon.

The brightest moon of the year occurs during Summer's Morning, the full moon that lasts for two days on the 15th and 16th of the month are referred to as Lycana's Dance. This is a holiday especially popular among the Elves and will even call for some Silver Elves to venture to the surface. It is celebrated by a grand festival of song, dance, and games of moving through the forest as shadows among the trees. During this festival, participants will sleep during the day and stay up during both nights, though outside of the Elven Kingdom it is seldom celebrated in full. 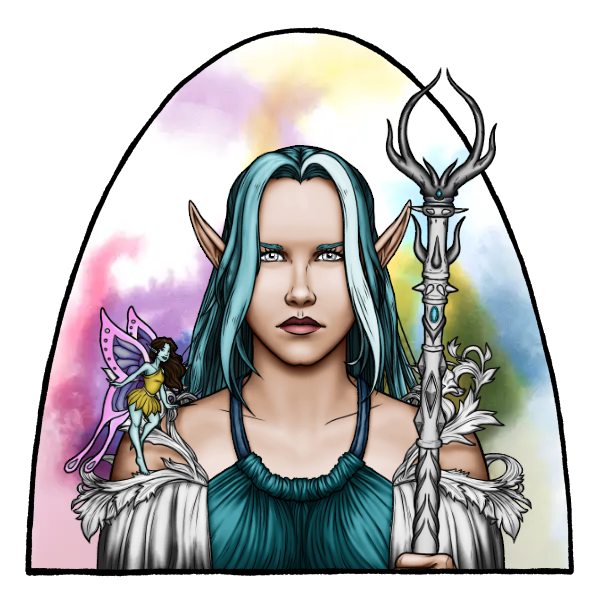 The Children of Lycana are many, diverse in both origin and race. They become true children of the goddess through an alignment with the natural world or through connection with their inner emotions, finding true meaning in their existence.   All creatures have a place within nature, find it, and cherish it.   Be kind to the small creatures of the forest and show no fear to the large, lumbering creatures of the world for they too have fear.   The shape of a creature is of no consequence for it changes with the passage of time, the changing of the season, and their understanding of themselves.   The moon is a beautiful light that invites all who see it to dance and sing far into the hours of the morning, only recalling sleep when the sun finally begins to rise.