The Ancient Home of the Revanes

At the northern most point of the Amaratharr Valley, hidden amongst the adolescent Aelinor Oaks, rests a village of Wapiti Tents centered around a low wooden building. The small tents surrounding the wooden building will never number more than four, as families of Outlanders come and go, but the largest tent stationed north of the wooden building stands as unmoving as the Aelinor Oaks that surround the small clearing. This huddle of deer-hide and wood was known as the Outlander village of Faelon and was run by the Revane Clan.   Once a bustling hub of hunting and trapping for Outlanders, the town of Faelon had grown smaller as the years had passed, until it was nothing more than a stop for travelers. Then it was nothing more than the ancestral home of the Outlander clan named Revane, with other Outlanders staying if they wished to learn the ways that had once made a great name for the Revanes. But even their great name couldn't grow the village as Elves moved on from the somewhat nomadic lifestyles they had once lived.   Outlanders lived on the outskirts of Jade Elf society, living off the land through their own skills and merit. Faelon had once been the same, a town created by the Outlanders for those wood Emerald Elves that lived the life of the forest. As its population dwindled, the Revanes stuck to the old ways and continued to teach the new generations the skills of hunting, trapping, and growing, up until the moment that Faelon ceased to exist.   The Eldritch War wreaked havoc on the edges of the Elven Kingdom. The earth was scorched, and the trees felled, leaving the small towns and villages that had hidden in the trees in ruins. Faelon was no different, as the tents were trampled, the buildings burned, and the Outlanders' way of life reduced to ashes. Unlike the other villages, Faelon was not given the chance to rise from the ashes. As Faelon burned and was reduced to nothing, so was the ancient Revane Clan that had called the land home for centuries.

The population in Faelon for much of its history consisted mainly of Emerald Elves that chose to live a lifestyle very different from the Jade Elves of the interior of the Elven Forest. These residents were mostly hunter-gatherers that often lived a somewhat nomadic lifestyle.

Faelon lacks defenses other than what the individual residents could provide. It was not uncommon to see large carnivores walk through the settlement, so it was left to the residents to protect themselves. This lack of organized defences would become extremely apparent during the Eldritch War as many fled or hid to protect themselves. Only a handful of members of the Revane Clan stayed to protect the village, perishing in the fire that razed a section of the forest.

Trade was a rare occurrence, but often took place if the village needed better weapons or items that could not be gotten from the land. Trading with other villages was often a long journey, one that the residents often chose not to take part in because of the time they would lose from their work.

The settlement consisted mostly of the tents of the residents with some fields in the small clearing. Foot paths that were widened from game trails led into the forests, but other amenities were nonexistent in the settlement. The population was small, not requiring much else to be a sustainable settlement, but the amount of tents and size of the fields often varied heavily from year to year for a variety of reasons.

Faelon was considered the ancient home of the Revane Clan, having been a settlement for centuries. Revanes lived in Faelon and took care of the forest around them, up until the Eldritch War decimated the settlement.

Faelon was built on a small clearing surrounded by Aelinor Oaks. Being on the northern edge of Amaratharr Valley, the village is on a small slope northward. Fresh water is a few minutes travel away to the Gweyr River. Since the Eldritch War, parts of the area have been turned to smoldering pits that have been unable to recover even after centuries. 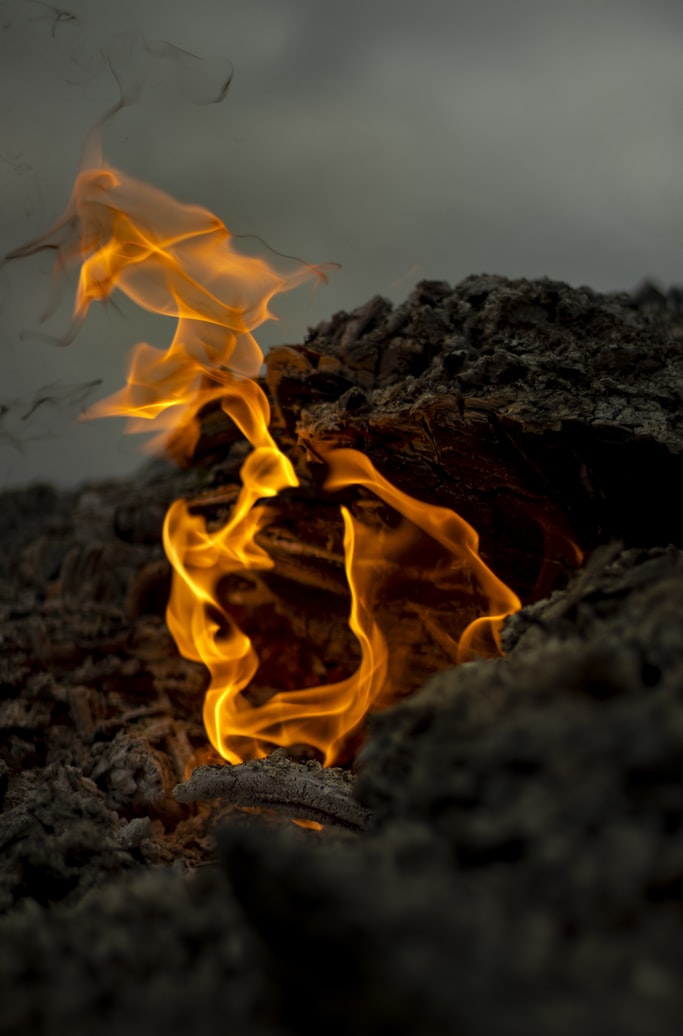 Flames by Alfred Kenneally on Unsplash
The village of Faelon was burned as part of an attack during the Eldritch War. Even centuries later, the ground still smolders, ashes blanketing the forest floor that has never recovered.

Answering: "Describe an isolated or frontier settlement and how it survives in your world."
Visit RiverFang's Competition Page Check all other answers to this prompt Competition Homepage