Hospitals of the Little Greenwood

Deep thuds reverberate through the thick walls of a toadstool as the small hands of the Mauskin work to hollow out the stalk and the lower portions of the cap, making space for beds to be placed and potions to be stored. A team of three works at the spongy material until only a few inches remains around the outer wall, enough to keep the weather away from the ill. Once the menfolk have left with their tools and the remains of the mushroom's innards, the well-known soft-spoken Mauskin with their white aprons sweep in to make the hollow toadstool into one of the famous infirmaries of the Little Greenwood.   What started as the specialty of the Mauskin soon became a common sight throughout the stout woods of the Little Greenwood. Tucked within their villages and built within the mushrooms that ran so rampant in the woods, the Toadstool Infirmary was something even the Halflings fell in love with, asking the Mauskin to bring the structures into the more built-up villages of the smallfolk. Places of healing were lacking in areas of Coastland, even those places where magic users abounded. It was a simple fact that the smallfolk of the stout forest needed to share their specialties.   The Mauskin hollowed mushrooms and prepared them to be full of goods and potions crafted by the Halflings, an arrangement that has lasted for nearly two centuries. The growth of the Little Greenwood aids the builders, forcing the growth of giant mushrooms in mere days in the more remote places that need healers the most. It is seen as the work of the forest, building safe havens in the very fungi that are so often known for their more poisonous properties. 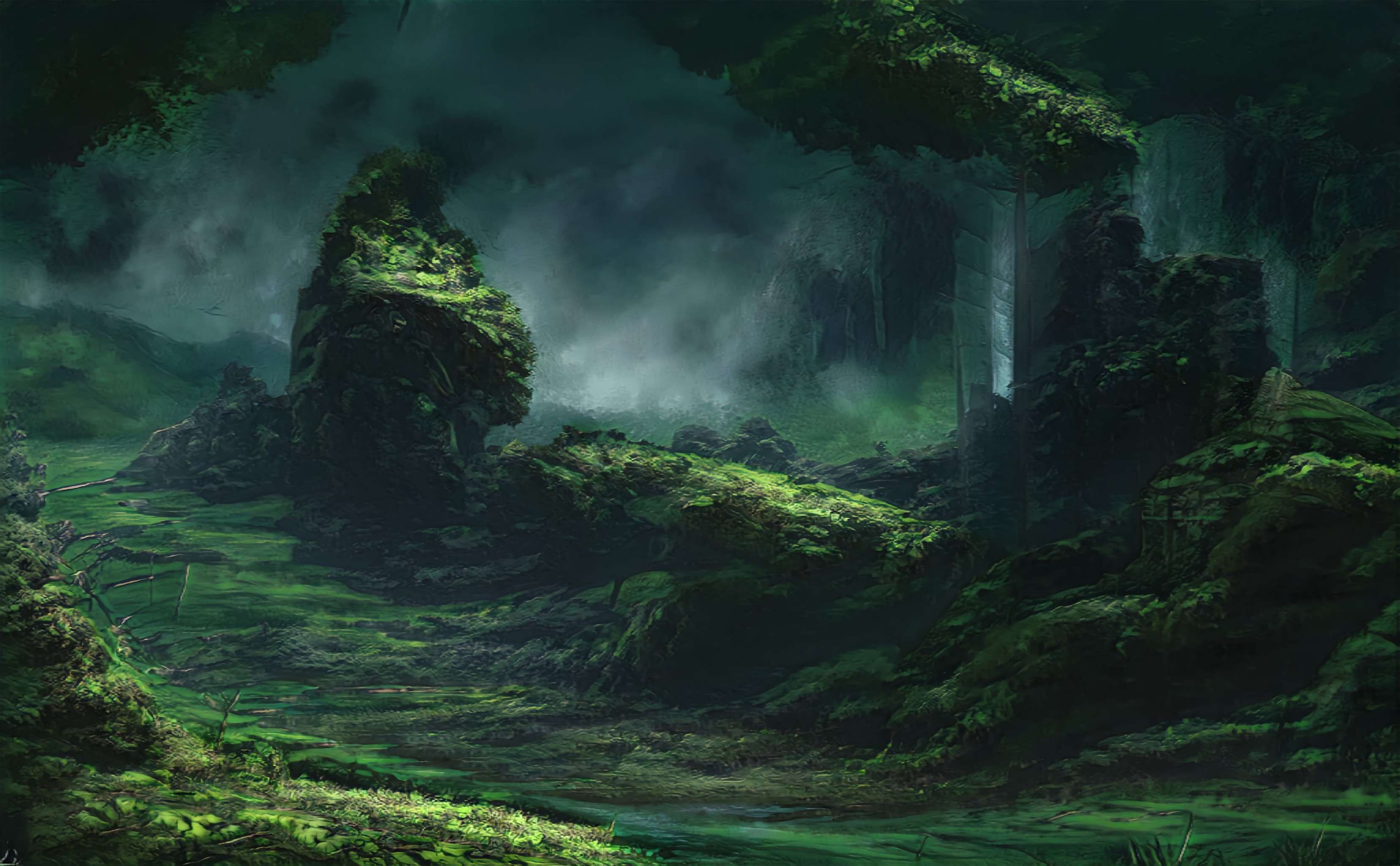 Toadstool Infirmary by Landscape via Artbreeder, created by RiverFang
The Toadstool Infirmaries found throughout the Little Greenwood often hide in plain sight as the forest retakes them as its own, covering the structures in moss and lichen.

Toadstool Infirmaries serve as a safe haven for those suffering from a variety of maladies and injuries. From those injured in battles over territories and great falls to bee stings and skinned knees, the healers that call these places home are trained in a variety of healing practices, both magical and nonmagical. Scattered throughout the Little Greenwood in secluded locations and in many of the more built-up areas of the Halflings, these infirmaries are often the closest that the denizens and travelers of this area will find to the clerics and priests of the large temples elsewhere.

Rumors and myths have scattered across the Northern Continent about the Toadstool Infirmaries as many believe the mushrooms these structures are created out of to be hallucinogenic or poisonous in nature. Both claims are unfounded as much testing was done by the Mauskin to ensure that there would be no unintended side effects from inhabiting the mushrooms, but this does not stop a great deal of tourism from those outside the Little Greenwood. Some of the infirmaries boast various self-inflicted injuries on the part of travelers so that they may be treated at the Toadstool Infirmaries.
Founding Date
108 EA present
Alternative Names
Mushroom Medics
Type
Hospital
Parent Location
Little Greenwood
Owning Organization
Coastland

The entire construction process of the Toadstool Infirmaries is more of an alteration than a true construction. The Little Greenwood is known for its large variety of stout plant life, including the large and colorful fungi that are often found draped in moss and lichen. The Mauskin utilize these large fungi to build the infirmaries by hollowing out both the stalk and the lower part of the cap to create enough space for a small infirmary of six beds.   The walls are left roughly six inches in thickness to protect from the elements as well as most creatures that would dare take a bite out of the mushroom. Mushrooms used often have more pointed caps, so anything above the point where the cap is roughly two feet in diameter is left, while the rest of the cap is hollowed out to provide additional spaces for healers, potions, and any other items needed.

Mauskin were creating the Toadstool Infirmaries long before most of Isekai knew the Little Greenwood was inhabited by more than just the Halflings. The War of the Giant Camellia brought with it a need for healers and places of healing if the gentile folk were to engage in wars and battles with those that threatened their homeland and fields. Scattered throughout their territory, small stores of healing items were tucked under the caps of mushrooms to protect from rain, but these instances were not safe enough to harbor those that could not be healed quickly.   With some practice, the Mauskin came to hollow out mushrooms and creating small rooms that at best could hold a single bed. They searched to perfect their safe places, building in different plants and fungi, above and below ground, until they came upon the correct type of mushroom and building patterns that would become the first perfected Toadstool Infirmaries.   Soon after the gentile folk perfected their craft, the Halflings approached them and asked for an agreement that would come to be known as the Fungi Agreement. This would create a great deal of trade between the two races surrounding healing supplies, healers, and buildings for healing.
Little Greenwood

Answering: "a building associated with healing the sick"
Visit RiverFang's Competition Page Check all other answers to this prompt Competition Homepage

Very solid article: the writing, layout, and visuals all click well.   I like the aspect of reusing something that was 'emptied' in a sense. And also the fact you say 'menfolk' as its usually non-humans that have that. It's a nice touch that tells a lot about the setting already.   Happy SummerCamp !

Great article, the visuals are very strong even without the cool Artbreeder landscape. Just reading it makes me feel cosy

These places sound adorable. The attention to detail in how exactly they are built is a wonderful thing to read.

I love this so much. I love your Mauskin, and I love the fact they use giant toadstools as infirmaries. I hope there's art of this one day! <3 The history section really adds to how real the article feels, particularly the idea of kind of trial and error in finding what would work for them.

This is lovely! Slowly starting to go through my article backlog and this was a lovely way to begin!

Very interesting idea for a building! The history was a nice touch as well giving a bit of an idea of how the mousekin came to use them.

Feel free to check out my latest challenge article the Avaronian Empire if you want to see what I am up to!
Powered by World Anvil