In the Little Greenwood, it is not surprising to see creatures and plants that have taken on the short, stout and somewhat oversized characteristics that define what this place is. Draguna and other giant insects flit amongst the Giant Camellias and stout trees, making the little forest seem anything but. Amongst all of this, one may find the small villages of the Mauskin, another race that is larger than many would think.   Mauskin are a young species of the Animal Kingdom, having only been known by the world since the early days of the Eldritch War. Found in some of the most obscure places of the world, these small folk, that resemble large mice and are part of the Rodenta family, are charged with making the inhospitable places of Isekai livable. Their role in the Eldritch War was small, as some of them tried to stand their ground to defend their homelands, but many of them fled with their small villages to new regions where they could continue to survive. Mauskin are known to be a small, nimble race that carves out a place for their homes and villages in the most unexpected places to include every biome of the wilderness and in the shadow of larger races.   Currently, Mauskin live across the world in large cities constructed by other races and in small villages that can be found in hidden-away parts of the world. They are especially adept at hiding from danger and finding ways to go about their lives even when they are in close proximity to violent races. These creatures will live in a way that promotes their survival in almost every area and they have learned how to live in deserts, tundra, mountains, and even Káto.

Mauskin are a species that most closely resembles their animal counterpart, mice or rodents in general, with only passing similarities to the Human anatomy. The main similarities with the Human physique involve: the ability to stand up straight, hands that are adapted to easily grasp weapons and objects for use, and vocal cords that allow them to form words consistent with other languages such as Common. Mauskin are intelligent, large mice in almost every sense of the word that have large ears, noses, whiskers, and even a tail in the correct proportions for their 2-foot tall frames. They have exceptional hearing and smell much like their animal counterparts and their bodies are light, even for their size, which makes them difficult to pin down or capture when they focus on evasion.   The final and most notable trait of the Mauskin is their pliable bones that allow them to survive falls and squeeze into tight spaces. While these traits are expected in actual mice, due to the size of a Mauskin it would be expected that they behave in a manner similar to halflings but their skeletal structure is nearly identical to that of smaller rodents and allows them to slip into spaces and survive falls easily due to their light weight.   Common Colorations

Mauskin come in a variety of colors, but the shades of their fur are meant to serve as a form of camouflage, hiding these small people amongst the foliage from larger beasts that would prey on them. Their fur ranges in color from a stark white to soft heather greys to champagne and chocolate browns to deep midnight blacks. The color of their eyes has a much smaller range, often only being brown, black, grey, ruby red, or rose pink.

Mauskin tend to live in either largely populated cities or in more rural areas. Those that live in larger cities amongst other races quickly fall into the established social structures of the area, possibly finding something similar to a family unit in a guild, adventuring party, or other groups. Mauskin prefer to be in groups instead of alone, so they will do what is necessary to either join or create their own groups if they are not around other Mauskin.   Those that live in more rural areas often live in small villages known as "nests". These villages are small groups of Mauskin, rarely numbering more than thirty or forty, that is often considered a family unit, although not all that live there are related. Here, residents often fall into the more traditional values of the Mauskin Culture, although those that live in cities do not ignore the traditions of their culture.   Culture is extremely important to the Mauskin, causing them to sometimes ignore the innovations from other races in order to keep the traditions that they have had since the race's beginning. Few of these riutals and traditions came about after the rest of the world knew about the Mauskin as they tend to hold onto the old ways to remind themselves of where they once came from.

Mauskin are not known to have inherently mystical abilities, but they tend to have greater perception and sensory capabilities than most other races due to their whiskers. Because of their small stature and the sensitivity of their whiskers, Mauskin can often sense danger from a distance due to minuscule vibrations that can be picked up with the use of their whiskers. Delicate and light scents can also be picked up easily with the whiskers or by the Mauskin's sensitive noise.   These perceptive traits allow Mauskin the ability to easily flee from danger or to dodge attacks in certain instances. A Mauskin's whiskers are one of their greatest traits, causing them to take extra care of their whiskers so that they are not damaged in any way. If damaged, a whisker will grow back, but it often takes a great deal of time, up to a few months, depending on the extent of the damage. 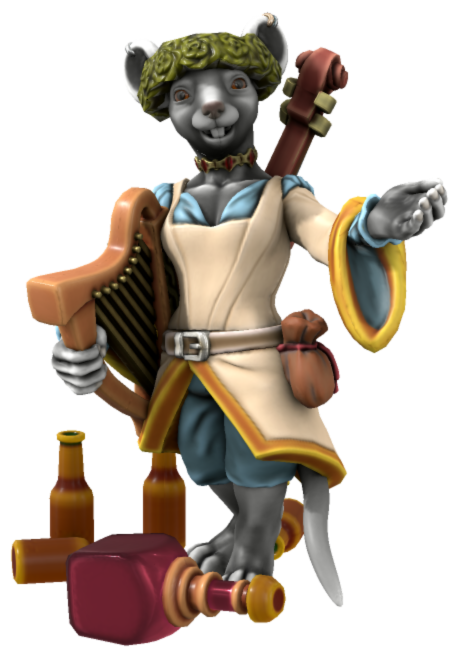 Mauskin by Model via Heroforge, created by RiverFang
A younger race of the world, the Mauskin are one of the many races of Rodenta that live throughout the forests and elsewhere in Isekai. Their small stature is not to be triffled with.
Genetic Ancestor(s)
Origin/Ancestry
Animal Kingdom, Rodent
Lifespan
40 years
Average Height
2 - 2.5 feet
Related Ethnicities

Based on the established villages and technologies that the Mauskin had in the early years of the Eldritch War when they were first discovered by the outside world, it is assumed that while still a relatively young race in the overall picture of the world, the Mauskin had existed for centuries without other races being none the wiser that Mauskin and the Rodenta as a whole even existed.   Since their discovery, Mauskin have moved their homelands and spread out across the vast reaches of Isekai, often living in places that no other race would live. For the most part, the race keeps to themselves, but select villages throughout the Little Greenwood have begun opening up and participating in trade throughout the region.
Rodenta

Gotta give the ratfolk love!

I love the Mauskin so much. I definitely think they are my favourite of your species. <3