City Beneath the Spine

Entrance into the Great Tunnel brings a moment of being bathed in complete darkness. The great cave that marks the entrance fades into the background, swallowing travelers like a huge black maw. A few seconds of pause bring adjustment to the eyes, allowing those that have delved into the depths to see the cragged pathways before them. Some minutes of travel lead to the soft hues of the dancing lights of the Silver Elves, large glowing orbs that light the towering caverns that these peoples of the depths call their homes. Within miles of the entrance of the Great Tunnel tucked in the Spine of Kallex, one finds the great city of Eryndlyn, a prosperous hub of trade and scandal.   The depths of the tunnel survived the events of the Eldritch War unscathed, but the horrors of Káto had existed for eons. Eryndlyn was a haven away from the creatures of the dark that killed everything that dared trespass in its territory, a city dedicated to the Huntress, the goddess that had made it their god-given right to slay all manner of beast or creature that entered the sacred streets of Silver Elf cities. Eryndlyn was no different; it was a hub of trade and worship, high priestesses and the Matron Mothers of the city dedicated their lives to the pleasure of the Huntress. Everything in the city revolved around the matriarchy that the Silver Elf Culture was built upon. 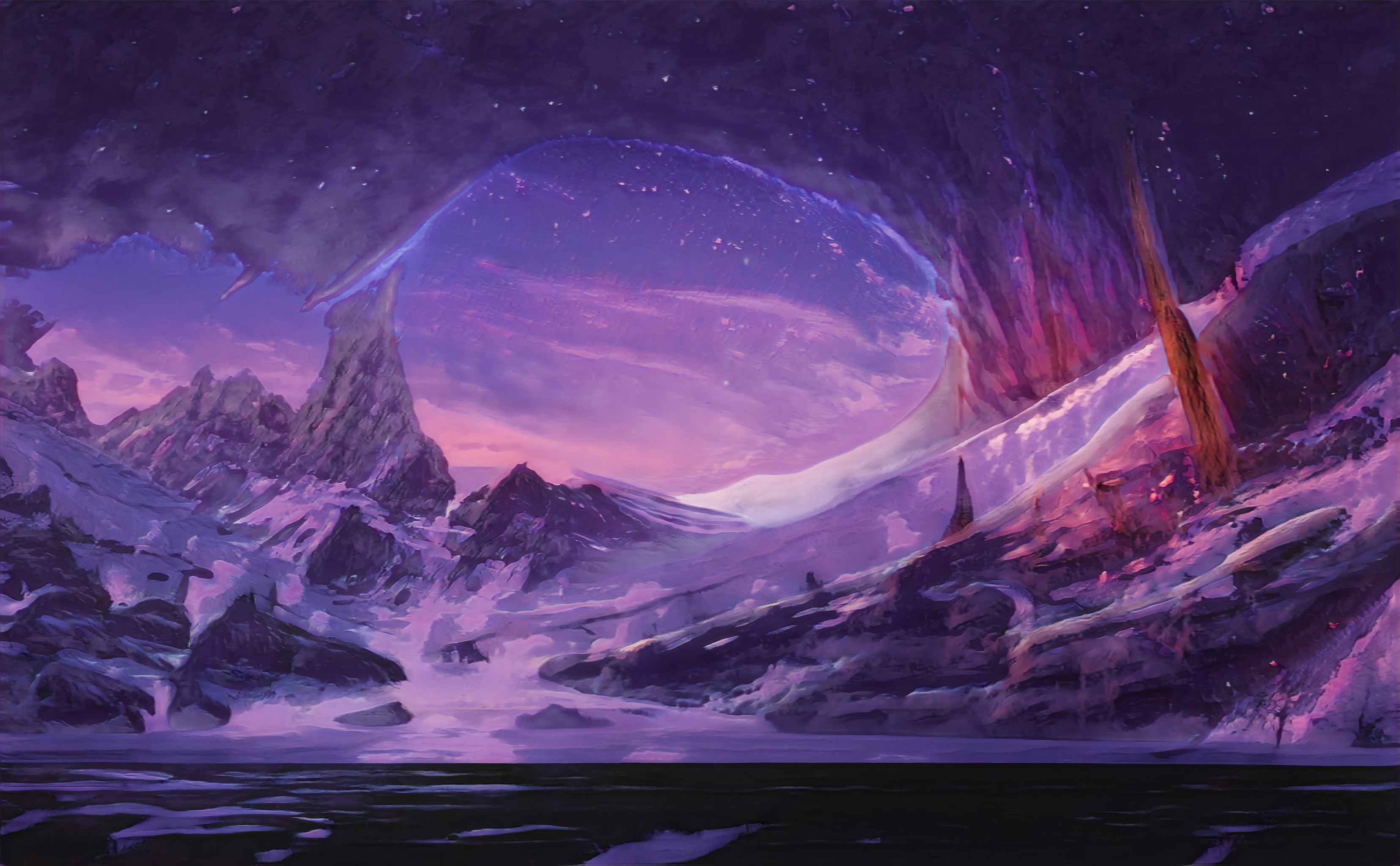 Great Tunnel by Landscape via Artbreeder, created by RiverFang
The Great Tunnel connects the east and the west of Vóreios through the meandering tunnels of Káto. Here, a variety of races are common, including those that very rarely ever leave the dark of Káto.
Scandals, murders, and crimes of all sorts often marred the history of Káto cities. The great city of Eryndlyn was no different, but the scandals that marked the history of the city were much different, often striking fear or hate into those in positions of power. The Matron Murders bled the city of its anger, replacing the constant wave of anger and fear with deep pools of fear as the Matron Mothers feared for their lives. Certain houses were often a part of these scandals, a fact that was not lost upon the Ruling Council of Eryndlyn. Politics of Káto were often cutthroat, resulting in horrible outcomes, as saw fit by the ruling matrons.

Eryndlyn is one of the largest Silver Elf cities in Káto, boasting a large population of Silver Elves that serve as priestesses, spell casters, and fighters. It is nearly unheard of to find another species living in this city, but the Silver Elves of Eryndlyn are not above trading with the various species of the surface.   The majority of women in this city fulfill the role of high priestess for one of the many houses within the city. While those of noble houses, especially those in the Ruling Council, are required to attend the academy and become a high priestess, this is not a requirement of those Silver Elf females of other houses. Men often become fighters, unless they show an aptitude for spell casting, but this is very rare in the houses of the ruling councils and these men are treated on par with high priestess. Men in other houses that do not become fighters often take on roles of craftsmen and other seemingly lower-class occupations to make the city run smoothly.   People in this area prosper, even with the harsh environment and horrific creatures of Káto. Trade is conducted between the various houses, with other cities in Káto, and with cities and peoples on the surface. Very few people travel outside of the city, but those houses that trade with the surface select specific people to travel out of Káto and conduct their business.

Eryndlyn, much like all Silver Elf society, is based on a matriarchal society that is led by a ruling council of the matrons of the nine ruling houses of the city. These houses are often noble houses of the city and will fight to gain a higher rank within the noble houses or to make an empty space on the ruling council so that they may join the council.   This group of nine women form the government for the city, making laws and passing judgment when the time or offense calls for it. Crime is an interesting concept in Káto, often being unspoken if there is no one left of the victim house to make an accusation. If an accusation is made, the Ruling Council of Eryndlyn will pass judgment for the offense.   The Ruling Council of Eryndlyn is currently led by House Duskryn, the highest ranked noble house in the city. House Duskryn has held this position for nearly ten centuries, with the current Matron Mother of that house having served for nearly five centuries.

The city of Eryndlyn does not have a standing army as each of the houses tend to have their own trained army of fighters, spell casters, and priestesses. From House Duskryn to the smallest of the Silver Elf houses, a house army can range in size from 100 to 1000 or even greater.   The Great Tunnel provides some natural defenses in the way of cragged floors and rough ceilings, but the houses rely more on their own strength and the defenses of their houses in times of need.

The majority of things in Eryndlyn are housed in the various spaces of the noble houses or within the academy in the city:   House Duskryn: the first noble house of Eryndlyn is housed in a large complex that is in the middle of the city   House Baenre: the eighth noble house can be found in a multi-building complex on the western edge of the city, close to the entrance of the Great Tunnel. This house participates in a variety of trading outside of Káto.   House T'sarran: the ninth noble house is in a smaller complex nestled close to the home of House Baenre. This complex boasts large spires that hold libraries and places of study.   The Academy: a large, mutli-spired building in the center of the city close to the home of House Duskryn. All Silver Elf children are required to attend this academy at some point in their lives, but those that choose to become priestesses, spell casters, or fighters will spend much more of their lives here.   In addition, there are a variety of small shops and other buildings throughout the city, but those buildings not controlled by houses of the ruling council are often considered the slums. Even so, the roads are well kept, often being made of a heavy stone that is obsidian in color.   The city does not have walls as the cragged floor and ceiling of the Great Tunnel provides some natural defenses for the city. Orbs of dancing light are placed strategically around the cavern, allowing for a dim glow to permeate the darkness of the tunnel.

The history of Eryndlyn is very secretive as the Ruling Council of Eryndlyn and its houses tend to strike events from their history if it fits their whimsy. The city has stood for thousands of years and had survived the Eldritch War, but beyond major events, very little exists in the written history of the city that outsiders are allowed to see. 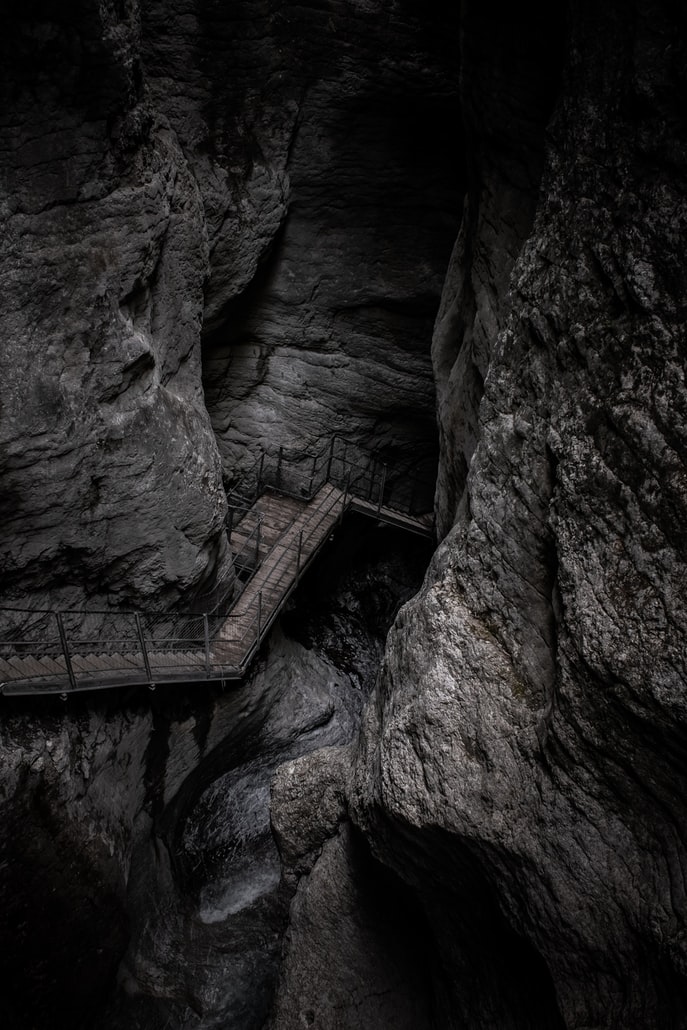 Cave by Dario Brönnimann on Unsplash
Due to the size of the cavern Eryndlyn is found in, many of these wooden walkways can be found on the edges of the city, leading into the tunnels surrounding the area. Many of the Ruling Council of Eryndlyn have worked to keep these on the peripherals, out of the public eye.
Type
Large city
Population
10,000
Inhabitant Demonym
Eryndlyns
Location under
Great Tunnel
Owning Organization
Ruling Council of Eryndlyn
Characters in Location

House Baenre is the eighth noble house of Eryndlyn. Over its centuries of being part of the Ruling Council of Eryndlyn, House Baenre has faced more than its share of scandals. Matron Xune Baenre, the matron of House Baenre that gained the house's seat on the council was one of the matrons killed during the event known as the Matron Murders. Since then, the house has been led by Matron Zilvra Baerne, a power-hungry woman that strives to make her house reach greatness through whatever means necessary.   The latest scandal that has plagued House Baenre is the traitorous behavior of Matron Zilvra's youngest daughter, Miz'ri Baenre. Miz'ri fled Káto for the surface after failing to gain entrance into the high priestess academy in Eryndlyn.

House Duskryn has served as the ruling house of Eryndlyn for nearly ten centuries, the longest rule of any house in the history of the city. This house and its leader boasts a strong standing army, a large order of high priestesses, and some of the strongest spell casters in all of Káto. Very few have ever attempted to oppose Matron Elerra Duskryn or her house, as those that have do not live to make accusations.

Assets within the city cannot be properly measured as the various noble houses and others within the city often will lie about the assets that they hold to keep others from committing crimes against them. Most of the houses participate in a variety of trade and have large amounts of trade goods held within their various complexes.
Eryndlyn