Home of the Metallic Dragons

At the very northern end of the Spine of Kallex lies a valley tucked away between the mountains, shrouded from the rest of the world and nearly impossible to enter. These mountains are the tallest in the world, covered in mist and ice in such a way that it is hidden from prying eyes. If you attempt to scry or use magical means, you will be met with only blinding light. The peaks themselves are not special but the valley that they hide is filled with incredible power, rumored to be the birthplace of the Metallic Dragons, one of the oldest creatures in the world and widely considered the most fearsome.   This place is still the only in the world where Ancient Metallic Dragons meet as a group to discuss the world. These are sacred grounds where one of each metallic egg was placed by the dragon god Kallex, because of this, there is immense respect for the discourse and rulings brought forth by the council that meets here. Made up of the Eldest of each metallic variation, this council decides everything to do with Metallic Dragon kind to include what is considered lawful and what judgment shall be passed upon their own kind. World events are reviewed and here it is decided if Dragonkind shall interfere with the course of the world or let things pass by. Judgement from this council is final and few creatures dare to question or go against the wisdom of these gathered Dragons.   Part of the reason that these judgments are respected is because of the nature of wisdom gathered to create them and partially because this valley is rumored to be a place so ingrained with the magical energy of the original Dragons that Metallic Dragons that have entered into their twilight continue to grow stronger as opposed to weaker.

Rich green grass, small shrubs that produce berries year-round, and a gentle breeze. This valley has a cool climate that does not fluctuate with the passing of seasons. The air is fresh, the water that flows from this valley forms the river called the Eye of Kallex. This water is crystal clear in a way that makes perfectly polished or enchanted glass look dull and dingy. Foul weather does not befall this place nor does snow or frost ever touch the green or the flowers that decorate the ground.   In the center of the valley there are twelve structures, perfectly square in design and arranged in a circle around a bend in the river where the water pools before flowing away to its great journey over land and eventually to the sea. These squares are large enough to be mistaken for the walls of a building if it wasn't for what they were made of. Each of these stones is made of a different material: Adamantite, Brass, Bronze, Cobalt, Copper, Gold, Iron, Mercury, Mithril, Orium, Silver and Steel. It is on these structures that the Dragons of the Metallic Council will hold their discourses and discussion in the dialects of their ancient language.   The high mountains around them have several caves and caverns where these Dragons keep vast hoards that have been added over thousands upon thousands of years since the original Dragons hatched from their eggs in this ancient valley. Within these vast caves can be found unimaginable that would make the race of Djinn pale if such a thing were wished for.

A plant unique to this area is called the Fettered Shell. These are a type of plant that are found nowhere else in the entire world, said to be the result of simple berry bushes being planted atop the crushed shells of the first Dragon wyrmlings.   They appear in twelve varieties corresponding to the varieties of Metallic Dragons but you can only tell them apart from the berries that they produce: Dragon Pearls. These berries are small, metallic and possess immense magical traits that have yet to be researched by Scholars. However, it is known that consuming a single berry is enough to sustain an Ancient Dragon or one that has entered their twilight for a month without any desire to consume more food. It is said that the Human champion Damascus was gifted with a potion made from all twelve of these berries from the dragon god Kallex, which bestowed immense power and an extended life upon him. 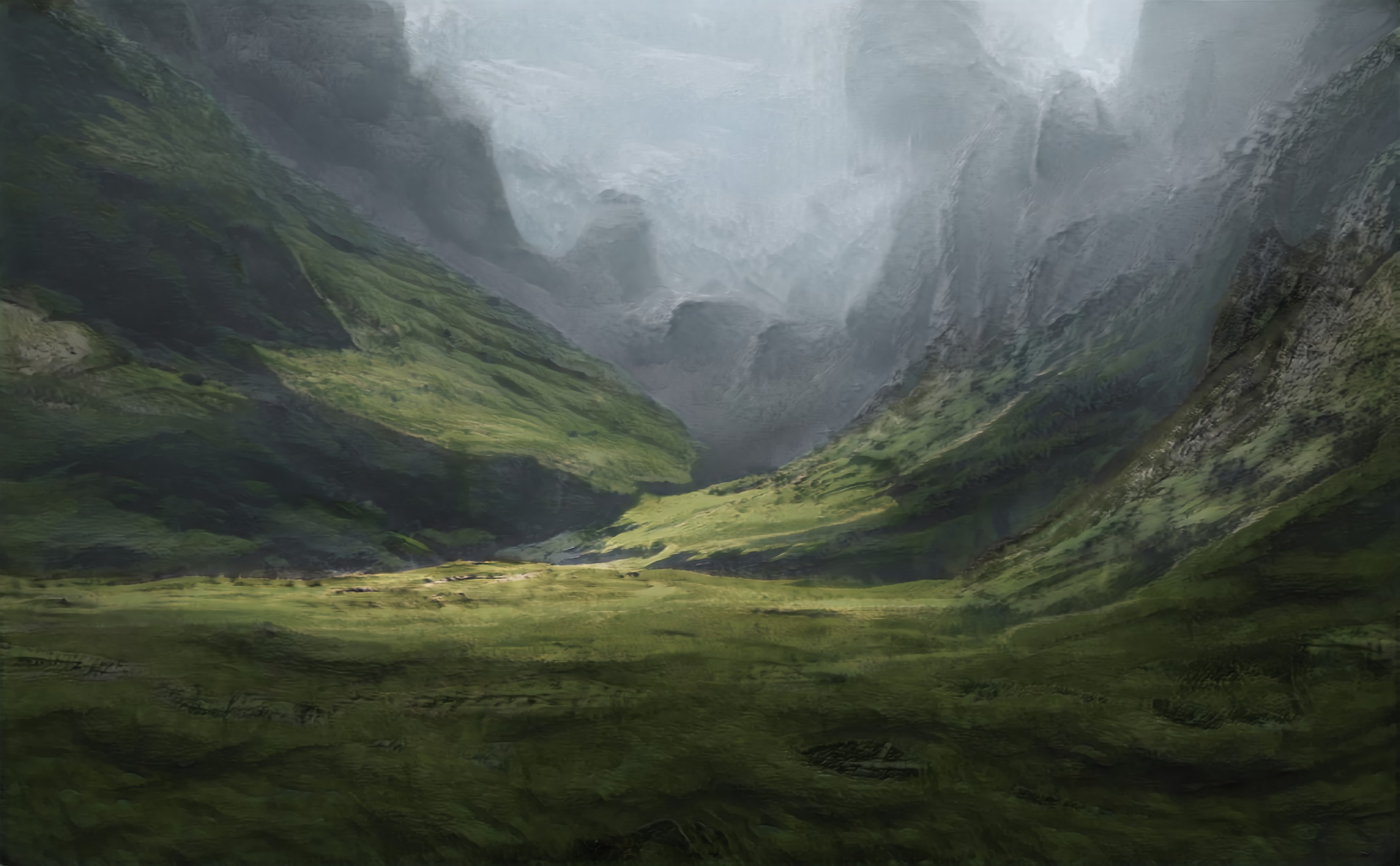 Metallic Council by Landscape via Artbreeder, created by RiverFang
Tucked within a split in the northern end of the Spine of Kallex, the "Metallic Council" is a lush valley fed by the Eye of Kallex and the magic of the Metallic Dragons that call this valley home.
Alternative Name(s)
The Original Dragon Nest
Type
Valley
Location under
Spine of Kallex
Included Organizations
Inhabiting Species

Sounds like a beautiful place. I love the idea of the Dragon Pearls. :D