Trees that stand as behemoth caretakers tower stories above, the sky buried within their thick canopy. The light that filters down to the forest floor is a liquid green, moving across the ground like a small stream. Silence is unheard of here as the trees creak in the wind, their leaves rustling like a cacophony of voices. Here, in some of the deepest parts of the Fairy King's Wood, that may not be too far from the truth. The trees whisper to each other, speaking long-forgotten languages that only the ancients know, sharing secrets and magics not known to the mortals that may find their peace and safety near the canopy above.

Oceans of trees bring fountains of magic, but that is truer here than elsewhere in this magic wood. Only the Redwoods remember the days before even the fair folk and fairies.
— Unknown

Animals and plants fill the air with a chorus of sounds and voices, turning a tranquil forest into a bustling corridor of travel. From the forest floor to the highest canopies, silence cannot be found, unless one dares to dig inside one of the behemoth trees and make their home. Even in the winter months, silence cannot be found. The outside weather rarely travels through the thick blanket of branches and leaves that protect the secluded valley and its inhabitants from the outside horrors. Within the confines of the valley, the forest is its own world, never affected by the things outside.   The size of the valley is immeasurable with the closely packed giants that stand as sentinels. The thick forest stretches for miles, lining the western side of the Fairy King's Wood. A small river runs through, but its name has been lost to the passage of time, just like this place is trapped in a single moment. For centuries, nothing has changed here, the trees and the forest creatures continue on as if no time ever passes. The only mark of the passage of time is the Witches that make their homes close to the heavens, small houses that float in a sea of fairy lights. 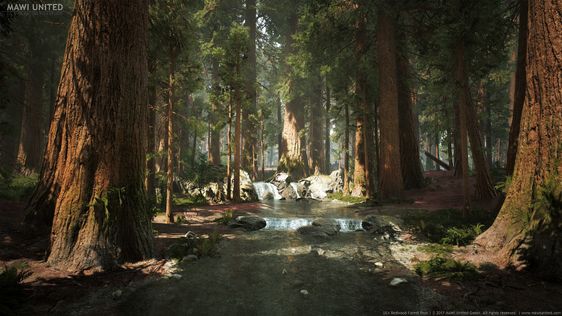 Redwood Forest by Willi Hammes
No people call the Valley of Redwoods home other than the Witches of the Lofted Tree Coven. These women are the protectors of the ancient trees and their lost languages. The forest gives to them, and the women give back, in magic and care that few understand. Even so, this care is as unwavering as the forest around them, never changing, endlessly going forward.

The Valley of Redwoods is a valley that rests on the western edge of the Fairy King's Wood. Roughly two-thirds the size of Lake Idryl, the valley is a deep bowl filled with dozens of flora and fauna, with the most notable being the Festival Redwoods. Due to the extreme size of many of the trees in this valley, it is impossible to tell the exact elevation of the lowest point as the trees blend the valley seamlessly with the rest of the forest.
A small river runs through the center of the valley, beginning at the valley's northern end from the Feyline River. As the valley continues further south, it moves away from the western edge of the forest in a south-easterly direction. The river continues past the Valley of Redwoods to eventually empty into the sea at the southern edge of the Fairy King's Wood.

Longest Point: From northern end to southern end is approx. 150 miles
Location: On the western edge of the Fairy King's Wood, just south of the Feyline
The climate of the valley varies very little throughout the year as the thick canopy of the trees keeps adverse weather from reaching the forest floor. In the summer months, it is often warm, with gentle breezes blowing through the valley. Closer to the river, the temperature may be cooler, especially when the wind blows, as the water never really warms here. In the winter months, the temperature is slightly cooler, but it never really gets cold in the valley. Snow, while not an impossible occurrence, is extremely rare and never lasts long. The valley often keeps to mild temperatures, only varying about ten degrees between the seasons.

Those that leave the valley are often surprised. The land here takes great care of us, never allowing us to live through the adversity brought by the weather that is the normal elsewhere.
— Witch of the Lofted Tree Coven

When speaking about the valley, it is often divided into two distinct areas. The first is the forest floor, an area that encompasses not only the ground level, but any area up to about twenty feet off the ground. The trees often have observation platforms at this height as a reminder of the distinction. The greatest population of flora and fauna can be found in this area. Any location that is more than twenty feet off the ground is designated the treetops. The Festival Redwoods can be hundreds of feet high, so the treetop area is massive. Few creatures are found here, but in the canopies is where the Lofted Tree Coven has decided to make its home.

The Valley of the Redwoods has some of the most diverse flora and fauna in Isekai due to it being mostly uninhabited. The area is considered a protected location by the Fairy King, Festival Snix, due to the magical properties of many of the plants and animals in this area. Creatures such as Mushroom Sprites and Fairy Golems are found here, as well as a variety of plants including the Festival Redwoods can only be found within the Valley of the Redwoods. 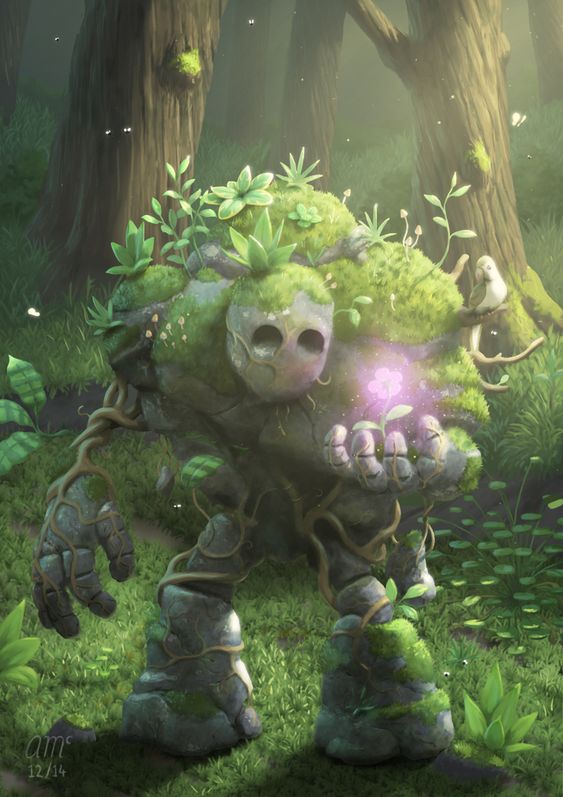 Garden Golem by Andrew McIntosh
One of the most interesting creatures that can be found in the Valley of the Redwoods are Fairy Golems. These small rock-like creatures are only the size of a Halfling, but have abilities similar to Stone Golems that are found elsewhere in Isekai. Mostly found on the edges of the valley, or away from the central river, these golems serve to keep dark spirits and other undead things away from the valley and its prized trees. Normally, these golems are very gentle and kind, gifting flowers and other small objects to the Witches of the Lofted Tree Coven. When provoked, Fairy Golems can grow to be the size of a Goliath and will attack whatever provoked it. As these creatures are extremely magical, very little can fend off their attacks. 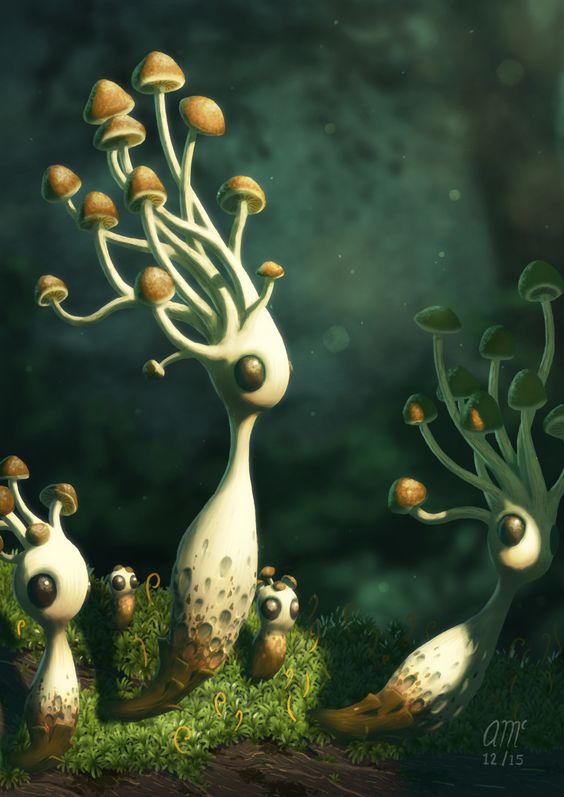 Mushrooms by Andrew McIntosh
Mushroom Sprites are small mushroom-like creatures that are often found near the roots of the Festival Redwoods. Varying in size from a small, coin-sized mushroom to some as large as a Spell Scroll, these small creatures serve as protectors of the giant trees. Many creatures within the valley burrow to create their homes and sometimes undermine the root systems of these ancient trees in the process. The mushrooms keep animals from burrowing near the roots of the trees by secreting poison dust that deters the animals and forces them to move away from the tree. This dust is not extremely harmful, but it does cause a mild discomfort that continues if you stay near the mushrooms for any length of time.   Another rare inhabitant of the Valley of Redwoods are the Festival Redwoods. These trees are ancient, having been dated back to the creation of Isekai itself. Even so, this portion of the Fairy King's Wood was relatively untouched until Festival Snix became the Fairy King. When Witches returned to this area during the Exodus of the Witches, the trees were discovered and named for the current Fairy King.   These trees are massive in size, standing as some of the largest trees in Isekai. Few trees are larger, but the number of massive trees is small. Festival Redwoods are extremely magical, lending their energy to things such as Arcane Weaving and Wand Making, both specialities of the Lofted Tree Coven. Very little of the trees are used as it would be nearly impossible to cut down a tree in the dense forest. Small sections are carved out of a tree for crafting and then the tree is left for a few months to heal before it is used again.
Alternative Name(s)
Redwood Valley
Type
Forest
Location under
Fairy King's Wood
Included Organizations
Owning Organization
Fairy Kingdom

While the Valley of Redwoods is home to a variety of flora and fauna, few others live there. The largest group that inhabits the area is the Lofted Tree Coven, a group of about thirty Witches that call the canopy of the Festival Redwoods their home. This group is known for their abundance of magically crafted items that they sell throughout the Fairy King's Wood.

Small houses that look like baskets from the forest floor hang from the massive branches of the trees the fairies call the Festival Redwoods. Vines of lights are strung between them, filling the night sky with the blinking rainbow of fire fly lights.

Arcane Weaving is a technology developed by the Witches of the Lofted Tree Coven that was used to create a variety of cloths that were magically infused. These cloths are woven from the bark of the Festival Redwoods and filled with the magical energy of the creator of the cloth. This technique cannot be found elsewhere in Isekai.

The art of Arcane Weaving was one such tidbit of knowledge the Festival Redwoods granted the Witches. Through this method, the Witches could shave thin pieces of bark from the trees and weave them into an intricate fabric that was innately magical.

While not specifically a technology of the Lofted Tree Coven, Wand Making is a speciality of the area as the Festival Redwoods are known for making exemplar wands. The export of the wands is much greater than that of the products of Arcane Weaving due to the time involved.

For most casters, only the delicately carved wands of the Festival Redwoods will do, items imbued with deep magic based in the Ancient Fey. Others can create wands, but only those of the Lofted Tree Coven have such power and grace.

Answering: "Describe a location in your world that is brimming with diverse or bizarre flora and fauna."
Visit RiverFang's Competition Page Check all other answers to this prompt Competition Homepage

The opening paragraph is so beautiful. <3   Also, MUSHROOM SPRITES. Aaaaaaaa! <3