Mountain to the Heavens

Against the dark of the night sky, one can always find the tallest peak of the Spine of Kallex tucked under the Dragon's tail of Blazing Mithril. It stands out against the skyline, bathed in the bright light of Mithril Major and Mithril Minor, as the face of the Dragon smiles down upon the peak. This is the ancestral home of the Mithril Dragons, at least as far as the myths say. No one has seen these Dragons atop the peak in decades, but the myths still abound.

Above the others, the peak shines down, the glow of the astral dragons alight with their memories and their will.
— Unknown

In the daylight, Mithril Peak shines like the opalescent scales of the Mithril Dragons, glowing against the dark backdrop of the dark Dragon Pines that coat the Spine like a thick fur coat. The trees and plants here glow a shining silver, far from the deep colors that are so typical of this flora. Against the rest of the rugged Spine, Mithril Peak looks like an oasis.   Other than the shining color, Mithril Peak is no different than the Spine of Kallex. Animals roam free while the trees and plants grow as thick as a wolf's coat. In the winter, snow does little to hinder this movement or growth, but the glimmering peak shines brighter, a glittering diamond against the white blanket of snow. 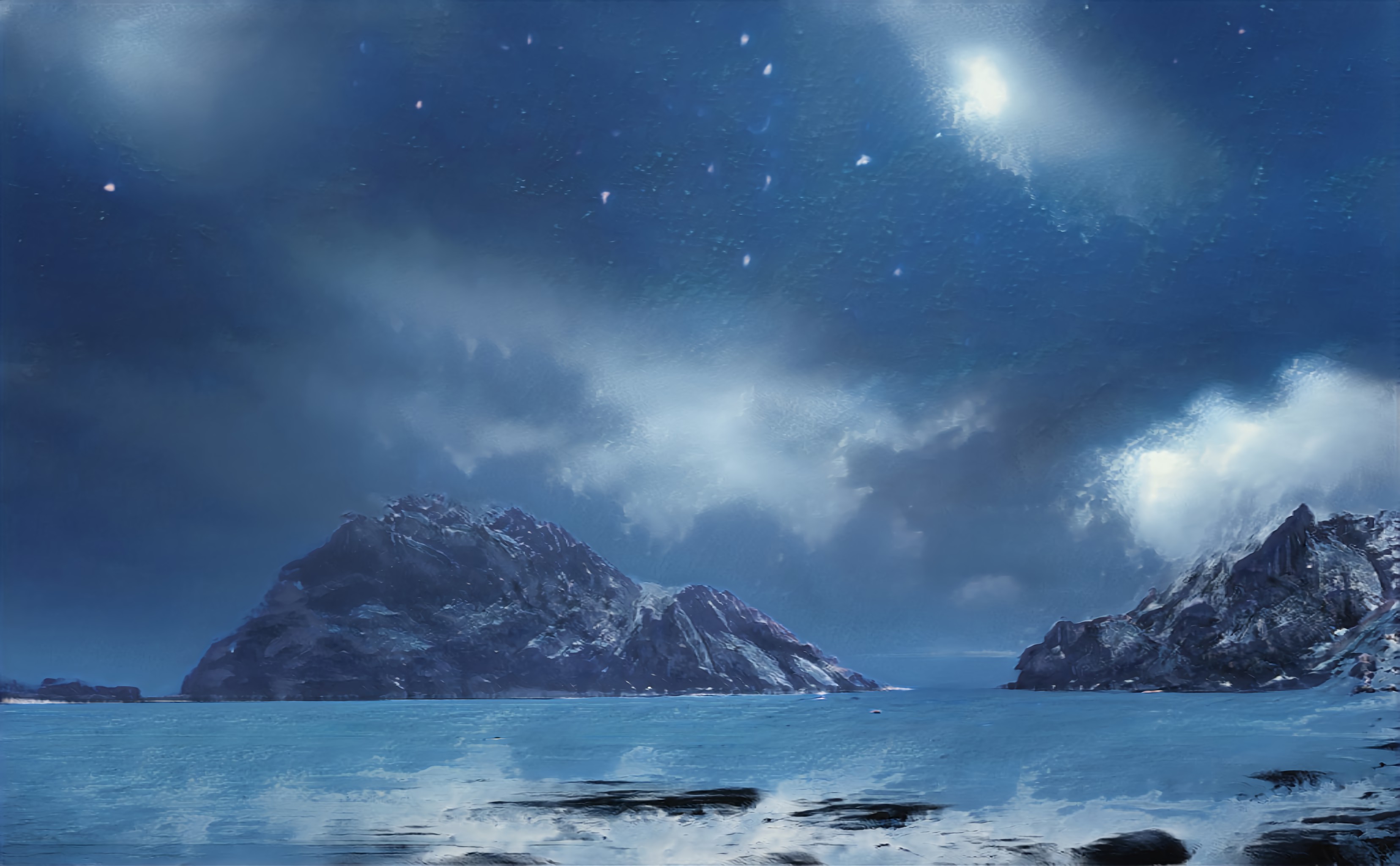 Mithril Peak by Landscape via Artbreeder, created by RiverFang
Often in the winter months, the top of Mithril Peak is shrouded in a thick fog. Above that layer of fog, one can view Mithril Major, Mithril Minor, and their constellations while seeming to float in the sky.

The Spine of Kallex is known across the Northern Continent for its varied and amazing geography. The range is home to the highest peaks on the continent of Vóreios, beautiful canyons carved by two major rivers that cut across the range in the northern and southern portions, and endless valleys that stretching between the reaching peaks. These features often span miles, giving the range a larger than life look that is often associated with the Dragon god Kallex. Mithril Peak, considered one of the Spikes of Kallex, is the tallest mountain in the range.   Mithril Peak is located in the northern portion of the Spine of Kallex, roughly one hundred miles south of the valley known as the "Metallic Council". This peak ascends far beyond the others of the Spine of Kallex, reaching an elevation of nearly 16,000 feet. Nestled between others of the Spikes of Kallex, Mithril Peak looks very similiar to the others in the range, outside of its extremely unique coloring.

It is unsure why Mithril Peak has its opalescent color, but this coloring is localized strictly to the upper reaches of this mountain, marking it as an anomaly against the other darker colors of the range. Many believe the coloring is from the blessing of the Mithril Dragons as many believe Mithril Peak to be where the barrier between the astral plane and the material plane is the thinnest. Here, it is believed that one can converse with astral Dragons just by looking up at the constellation Blazing Mithril.

Lower elevations of Mithril Peak are home to a variety of flora and fauna that are common elsewhere in the Spine of Kallex and the Elven Forest. As elevations reach the colder points of the peak, many flora and fauna thin, leaving only a few different varieties. Any elevations above the cloud cover are assumed to be sacred to the Mithril Dragons and very few of the species of the mountain enter this space. 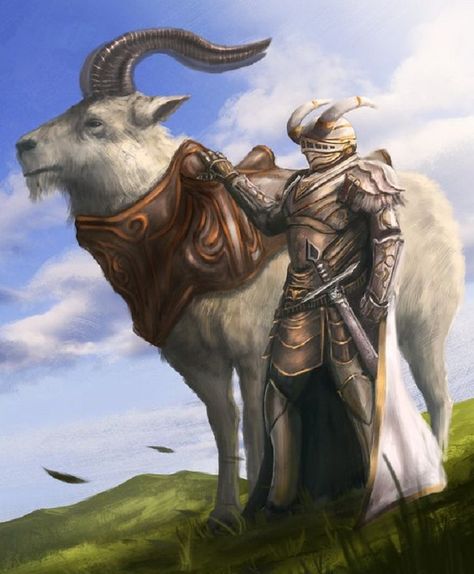 Giant Goat
Closer to the base of the mountain, it is common to find Aelinor Elk roaming the grasslands and thinner forests here, although they do tend to stay in lower elevations that are closest to the Elven Forest. Rarely, one may see an Aelinor Elk at elevations above 8000 feet in this area, but often times they tend to stay below 7000 feet.   Aelinor Oaks are also common in this area, but at lower elevations that are often hidden by the lower valleys of the surrounding mountains. These trees are more common in the areas closer to the Elven Forest, but are quickly replaced with the much hearty Dragon Pines in higher elevations.   Wolves and other animals found elsewhere are common in the lower elevations of Mithril Peak, but creatures such as Giant Alpaca and Giant Goats that can handle the colder temperatures thrive in the higher elevations of the alpine zone. These creatures roam in the areas where the Dragon Pines become prevalent, but below where the cloud line is.
Alternative Name(s)
Astral Peak
Type
Mountain / Hill
Location under
Spine of Kallex
Related Myths
Elevation
15,739 ft.

The myth of Dragon's Breath is often the one that people point to when they say that Mithril Peak is blessed by the Mithril Dragons.

Myths speak of a sleeping dragon, one that breathes the clouds into the sky that surround Mithril Peak like a halo, tucked against the chin of Blazing Mithril.

Constellations and celestial bodies define the night sky above Mithril Peak. These stars further the myths that surround the towering opalescent peak.

A dark sky awash with the bright colors of the Scales of Kallex stands above the peaks of the mountain range that also bears the Dragon king’s name. Stars in the outline of a Dragon shine bright, but the one that rests at the heart of the Dragon.

A blazing star above Mithril Peak, Mithril Major serves as the heart of the constellation, Blazing Mithril.

Appearing smaller near its brother Mithril Major, Mithril Minor serves as the eyes of the dragon in the constellation Blazing Mithril.

Answering: "an area or geographical landmark wrapped in myth, legend or superstition"
Visit RiverFang's Competition Page Check all other answers to this prompt Competition Homepage

Wow, I bet that the peak is beautiful to look at with the way it glimmers and shines. I also really like the note that it kind of lines up with a constellation. That's a nice touch.