"Jewel of the West"

The largest city in all Hariel (roughly six square miles), and possibly the world, Angleport is also the most diverse. Boasting a population of over 1 million citizens from various races and lands, it also serves as the largest repository of subjects under rule of the crown of Wyeth.   It is sometimes called "The City of Soaring Spires," "The King City," "The City of Bounteous Ports," or even "The City of Innumerable Portals."   Built upon the sunken ruins of a lost city (called Osentavel) from the bygone Lumerian civilization (see Lumeria), Angleport also has a vast "underworld," built from the ruins and teeming with life. The modern city sewers intersect with the fallen city in innumerable places.   It is even said that another "sub-city" exists, below the sewers of Angleport. A place rumored to be inhabited by a species of serpent people previously thought to have been extinct.

Angleport boasts the largest port in the west, and is in fact named for the strong right angle that the port-side of the city boasts. It is the base of operations for many of the world's most powerful trade groups and organizations. For example, "The Sea Merchants Company" is the largest organized seafaring trade group, and one that is not-so-secretly owned by the Club Masters of Angleport. The Club Masters are an organization of the monetary elite in the West. They bow to no crown, though they must pay lip service to Wyeth. They are not a group entered by blood, rather they invite new inductees based solely upon their personal power and wealth (and their inclination towards underhanded business practices).   The Club Masters have public faces in both Angleport and Varuum, though their influence spreads much wider. It is said that even in the free city of Varistane (known for its complete monetary independence from outside sources), the Club Masters rule is still felt.   The Club Masters are in constant, sometimes violent dispute with the independent sea traders known as The Velincario, whose members (The Velincar) are the only merchants brave (or foolish) enough to go head-to-head with the widely agreed masters of Angleport trade.

The city is divided up into wards and districts, with the most notable being: The North, South, East and West Districts (often collectively called The Compass Wards), the Noble Ward (located within the original city boundaries of "Old Town"), The Warehouse District (adjacent and overlapping the East District), The Docks, The "Cluster" (where the vast majority of low-income residents live), The Merchants Ward (sometimes called the "Trade Ward," and located just west of the Warehouse District), and The King's Ward (just south of South District).   The city watch, known as the Iron Helms, have sizable stations in nearly every ward, with the notable exception of the Cluster.

Obviously with a city the size of Angleport, especially one with a population bursting at the seams, magic plays a significant role in daily life. From arcane-augmented businesses to simple "spell for hire" services, you can find it in the city. That being said, all magic use still falls under the purview of Hex Chain, the crown's magic enforcement department. Any magic user intending an extended stay within the city is supposed to register with the Hex Chain office in the King's Ward. Magic use in limited to "mundane" and benign spell craft, and any usage beyond this, both in business and/or by visitors, is staunchly restricted. 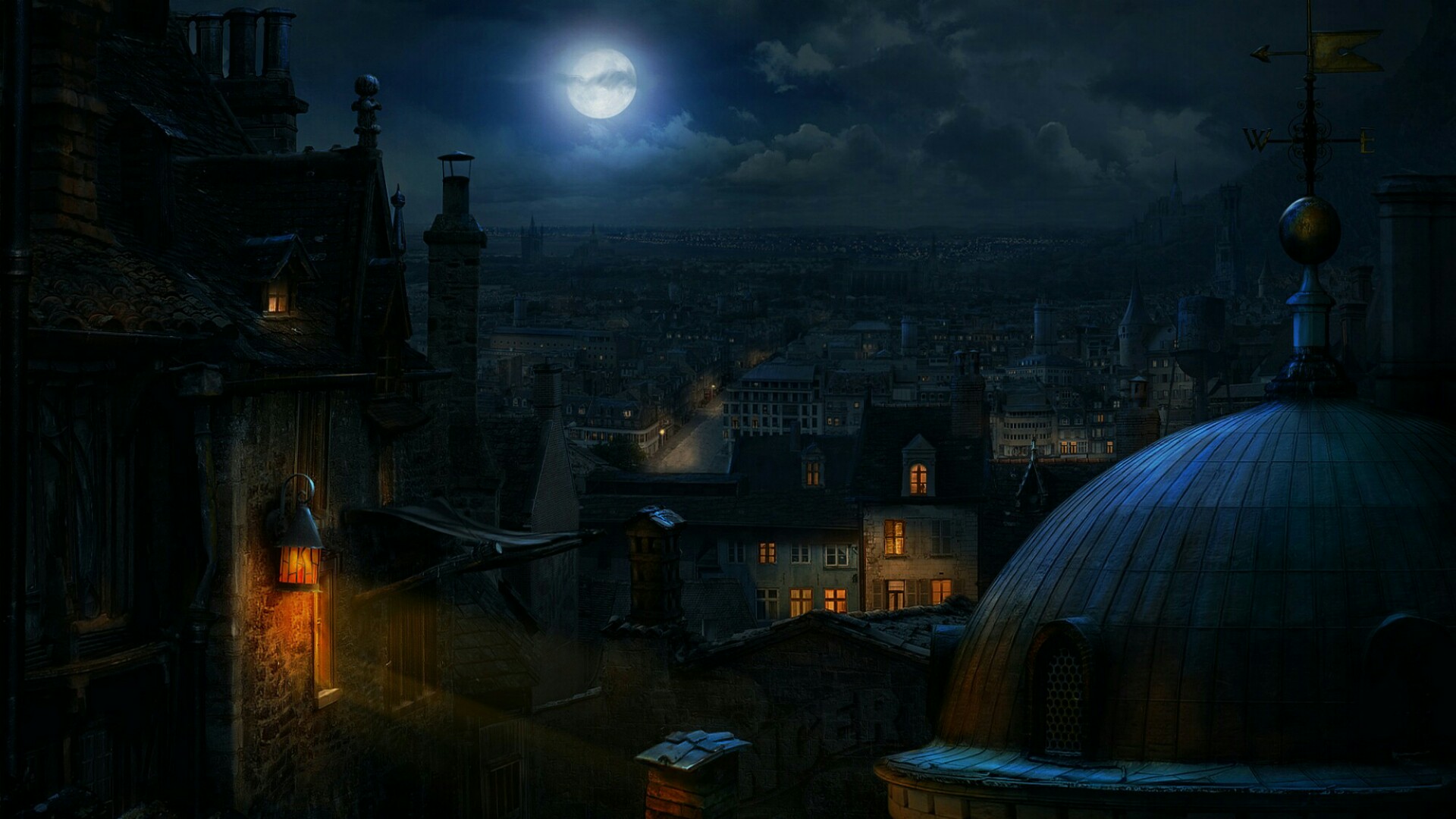 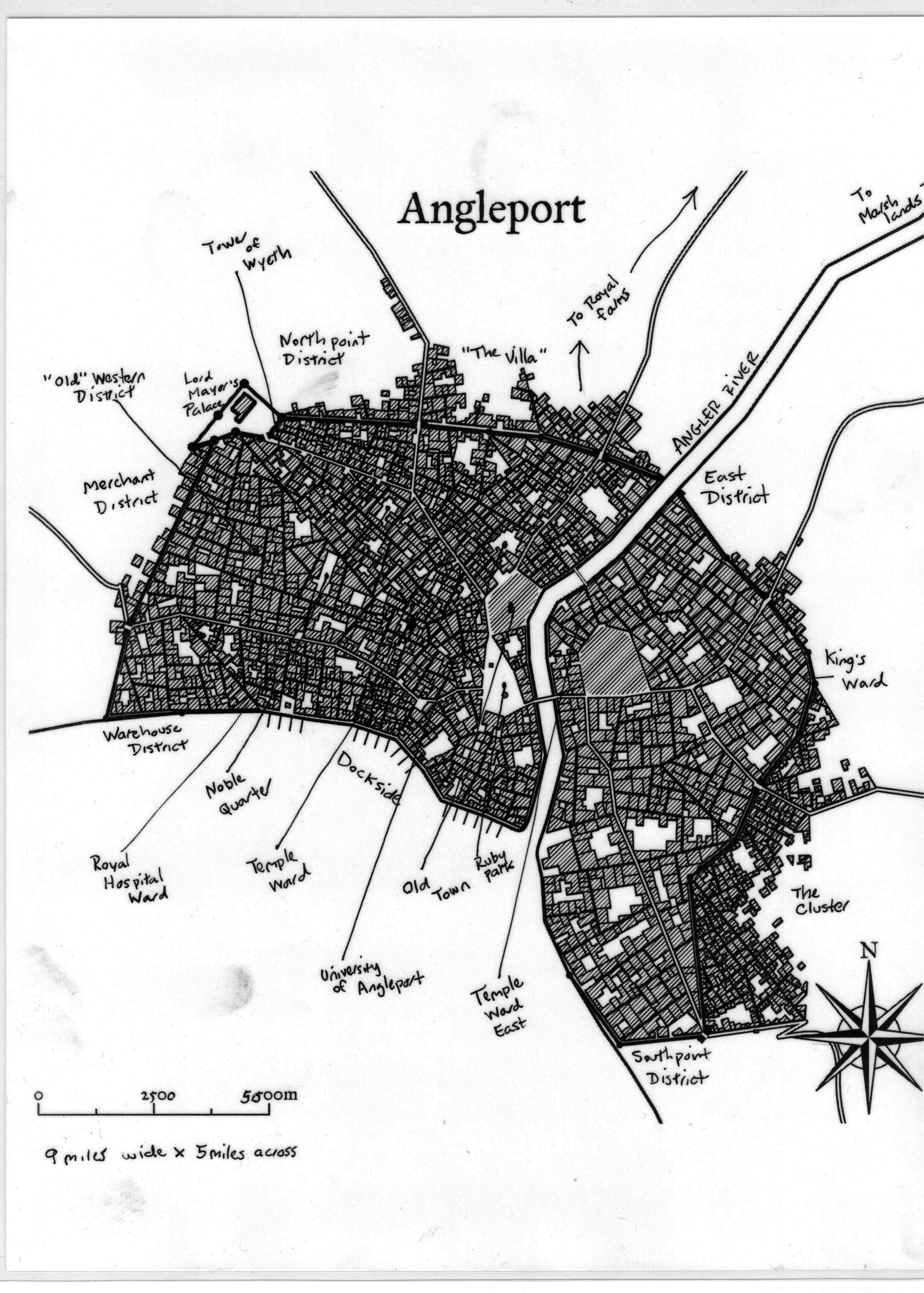 Though racially diverse, Angleport is still rather human-centric, with the population skewing 60% human, with an almost even distribution of the remaining 40% amongst the various races of both Hariel Majour and Minuta.

Under the feudal monarchy of Wyeth, but ruled locally by the seemingly forever young Lord Mayor (oft called "The Lord Provident"), the lady Honora Havasti (a half-elf [Vistraal] warlock of some renown).   Angleport is a "free city," but under the banner of Wyeth. Thus the Lord Provident pays homage to the crown, yet operates with as much independence as any city could, being a vassal to a liege lord. In many circles, the people feel that the Lord Provident's rule supersedes even that of Clarent Wyeth. For her part, Honora Havasti does little to dispel this notion.   Ostensibly, the Lord Provident is elected by a closed council of local lords (consisting mostly of wealthy patricians, merchant princes, and a few landed gentry loyal to the crown), with one seat on the council occupied by a "democratic" representative of "the people." That being said, in every election since her appointment (held every six years) Havasti has faced zero opposition. She has already served 12, six-year terms, with no end in sight.

The city is defended by a private army of 40,000 known as "The White Guard" or "The Breakers" (also sometimes referred to as "The Polished," as they wear gleaming armor), as well as a detachment of soldiers of Wyeth. These men-at-arms are garrisoned within the inner city, alongside the White Guard. It is said there is some animosity and competition between the two groups.

Angleport is the import/export capital of the West. As such, its industry is as varied as its population. It also serves as the bank and mint of Wyeth, and therefore houses more wealth than any other settlement on the supercontinent.

Angleport is an amazing city in which to found a business. Though crowded, space is still readily available and city services are geared to support small businesses of any size. Further, from a supply standpoint, pretty much anything one needs to operate can be found within the city limits.

They say that anything can be found in Angleport, and by all accounts, this seems to be true.

The Club Masters of Angleport, The Thornblack Assassins Guild, The Zanzakkar Thieves Guild, The Sea Merchants Company. See also the Guilds & Factions of the West for a complete list of the most prominent guilds.

Founded concurrent with (or actually just prior to) the empire of Wyeth, Angleport was the first major seaport in the West. It quickly outgrew its original boundaries, which are still denoted as "Old Town." The city has always served as the "second seat" of Wyeth, and the king's castle nestles up against Angleport's southern border. Many lesser (and some greater) members of the court reside in the Noble District in Old Town.   Angleport's inner city boundaries were already established when the original seat of power in Wyeth was established with the Aranost. The city was never really considered for positioning the castle in which the kings of Wyeth would reside. It was only after Angleport grew in prominence that the kingdom retroactively recognized its importance to the entirety of the west.

While Old Town boasts buildings made predominantly of strong northern wood, most of the buildings beyond its circumference are more modern, and built from stone. Due to its large surface area, Angleport was able to expand outward rather than upward (like in Varuumae Corona), and as such, lacks some of the tallest possible buildings. That is not to say that the city has no looming structures, however decent city planning has kept most of these taller edifices within the inner city.   The overall shape of Angleport is that of a crescent, radiating inland from its namesake docks. However, a large portion of the city also forms a semi-circle, radiating outward from the original city boundaries of Old Town.

Bordered on the West by the Great Sea, and on the north by the Spectral Sea, Angleport is the only city known to connect to to major bodies of water. To its immediate south lies the Kingdom of Wyeth, and Mount Celene can actually be seen from the tallest of Angleport's spires.   The small, but bustling Angler River cuts through the city, beginning at the Silver Mountains and ending at Angle Bay. It is the primary route that mined silver takes on its trip to the great city (where it is refined and, in some cases, minted). Even the king's take of silver must first pass through the "Shining Gate of Silver" on the east end of Angleport.

The last natural woods (before they become The Dullwood) lie to the east, and as such, lumber is processed within Angleport in mass quantities. It is also the source of most of Hariel Majour's seafood.   As mentioned above, Angleport is also the most important way-station and refining center for the vast majority of the crown's silver. 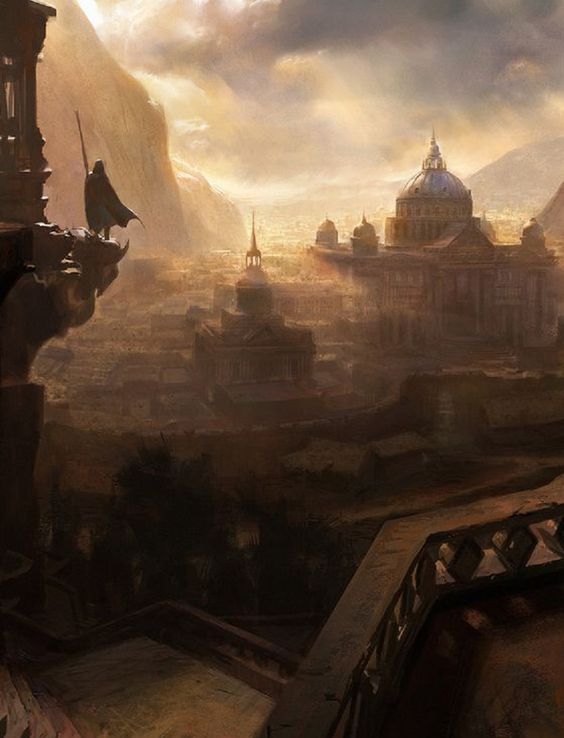 RUINED SETTLEMENT
It is unknown when exactly the original Lumerian city (upon which Angleport is based) fell. It is also unknown even what the city was named, or who its occupants were. Many adventurers have delved deep looking for answers that seem to never come. 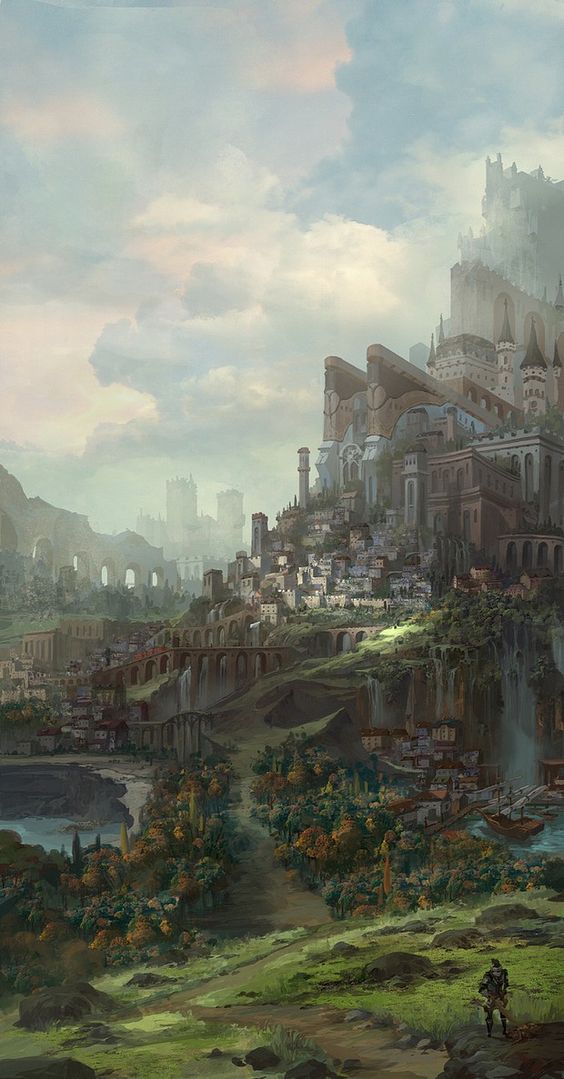