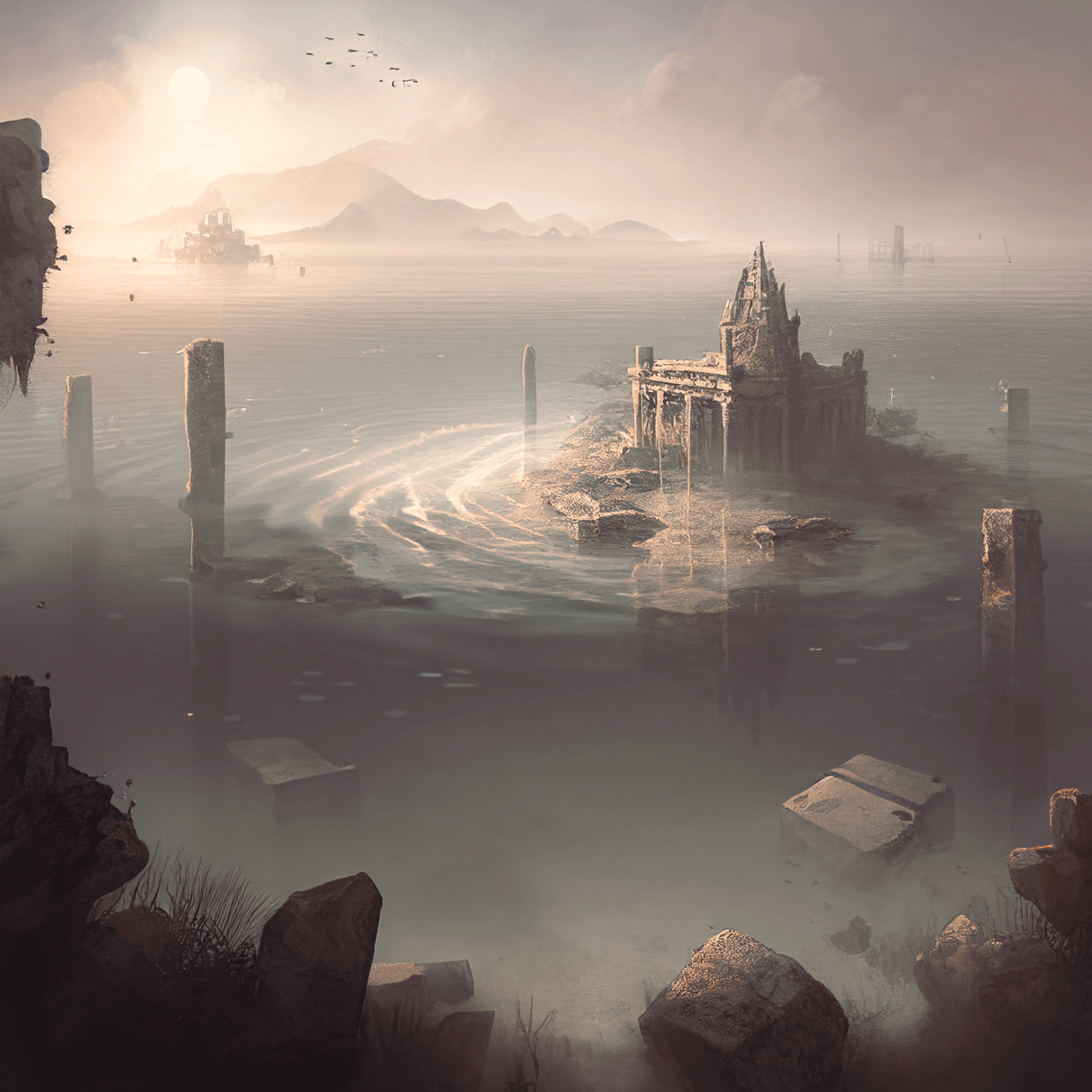 Shadowfire    Geography and Nations      Lands of Twilight      Uferbrech
A series of highly volcanic islands south of Reverence Bay also known as the Broken Shores. The island coasts consist of crumbing cliffs and lava flows surrounded by treacherous waters of rubble, reefs and submerged ruins of cities drowned during The Destruction. Those who make their home live by harsh codes, make their living mining the mountains, fishing the seas and scavenging the submerged ruins for pre-Destruction artefacts and old knowledge.

The four main islands of Uferbrech are all that remains of the southern half of the main continent of the Western Hemisphere. During Destruction, the earthquakes collapsed the areas of the Hollow Earth beneath, causing the continent to collapse. All that remains are the tops of mountain ranges that once dominated. In the thousands of years since, volcanic activity across the four islands has resulted in rich volcanic earth filling the spaces between the mountains.   The sea between the islands is very shallow, and the huge tides caused by the two moons leaves vast differences between low and high tide, which can last for weeks. At low tide, immense expanses of ruins of the cities from pre-Destruction times are revealed.   The shallow seas also make it treacherous for all but the most shallow-drafted of vessels to make passage between the islands, with the two major settlements of Omberstad on the East, and Badenton to the North being the only deep-water ports accessible by ocean going vessels.

Largely temperate to the south and west, but with localised semi-tropical areas on the western-most slopes that receive lots of sun.   To the north and east, especially on the Shadowside of the islands and in Omberstad, the cold winds coming from the Sea of Black Ice to the East keep those areas cold and snow bound.   The ecosystem is based on the ocean, with vast shallow-sea kelp forests and sea-life. On land, ecosystems consist of cold shrublands and moors on shadowsides, with temperate hardwood forests on the sunward sides of the mountainous islands.

Largely dominated by the two great current that circle the islands. From the East and across the north streams a deep cold current from Shadowside, while the South and west is dominated by a warm current that flows from Sunside, bringing much nutrients with it.   The fluctuations of the great tides that follow the two moons causes the biggest changes to ocean life - when deep-water fishes come in to hunt, while shallow seas offer protection for moments of mating and the bringing up of young.

There are many peculiar areas within the ruins  of the ancient cities, where remnants of magics from the Goldings Wars are still apparent.  Rifts to the astral plane and other outer planes appear from time to time, and there are pockets of strange fey influence within the deeper forests and wilder places of the region.

The shallow seas of Uferbrech team with sea life, much cold adapted and able to survive during the low tides in isolated pools. There are species of large salt-water amphibians, eels and octopi that are adept at hunting and surviving through the ever changing depths of the sea.   Hardwood trees dominate the western slopes of the islands, and low-lying coast areas are home to vast mangroves and salt-water swamps.

Badenton sits on the island of Timesdawn, which sits well within the sunnier side of the Twilight lands, and that combined with the rich fertile soil from the volcanic activity means it is a rich source of cultivated foodstuffs and grazing animals. The black volcanic cliffs are topped with thick grasslands and dotted groves of well manicured forests. Great estates dot the island, with great orchards and vineyards, producing wine and spirits which they export to great profit.   Omberstad is a rich source of metals and gemstones mined in the mountains, as well as more illicit camps of bandits and cartels of The League of Shadows who raid the ruins of the old cities under the water for old magic, tech and other valuables from before the Destruction.   The southern-most island is the source of vast temperate forests of hardwood trees - in much demand for construction across The Lands of Twilight, but fiercely protected by the goblin tribes.   Other primary resources are the fish and other sea-life that many tribes farm and hunt for self-sustenance and some trade with the locals on the other islands.

The islands were originally part of a larger continent which collapsed during the Destruction. In the middle of the Uferbrech Sea lies the ruins of one of the greatest cities, and many of its satellite towns, of the old empire, and its towers can still be seen rising above surging waters of massive tides.   Long before the return from Refuge, the islands of Motu and Telela were home to the ocean going Goblin kin who roamed semi-nomadic across the islands in the rafts, communing with their ancestor gods beneath the waves, and trading with the underwater races from the Tangled Fathoms.   The arrival of the Returned from Refuge when they founded The Protectorates changed all that.   When the Returned waged war and lost against the Tribes of the Shimmerlands , they retreated Shadowside of the Brightwelds, and set about establishing their dominion.   When the reached the islands of Uferbrech, the conflicts continued with the local goblins, who eventually retreated to the western side of Omberstad and the southern islands. Some were assimilated, but many still live the old ways and harbour deep resentment.

Motu is the western most island of Uferbrech , and home to the surviving clans of the Islander Goblins, led by the Mothers of Motu

At the centre of the Uferbrech archipelago lies one of the most treacherous and mysterious bodies of water in Shadowfire.

Shadowside island of Uferbrech, where the Protectorates outpost of Omberstad aims to establish control against the growing resistance of the Motu .