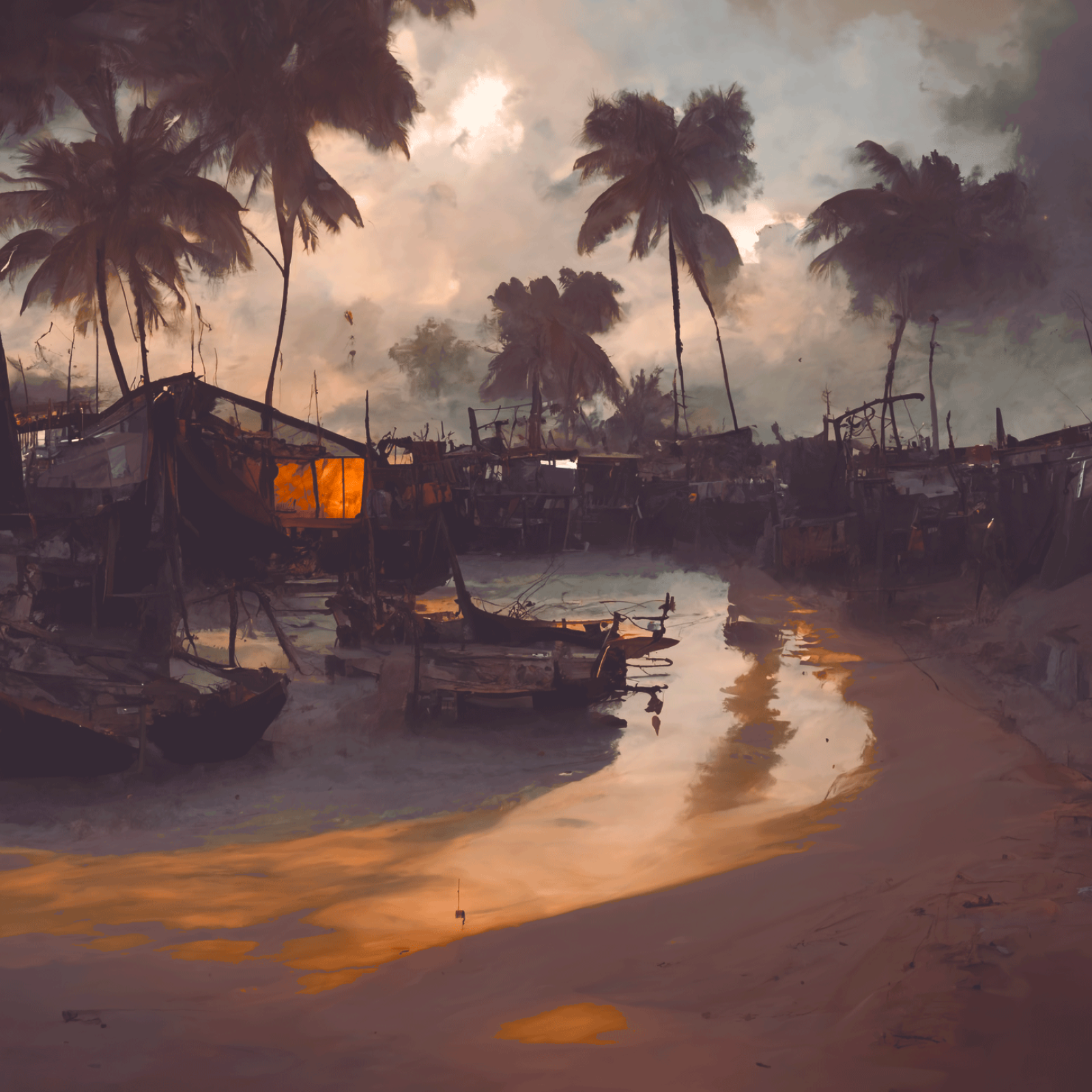 Shadowfire      Uferbrech      Tokaru      Camp Thrifty
The main image that people have of Camp Thrifty is that of a lawless shanty town filled with fortune hunters, smugglers and illicit tomb raiders intent on plundering the ruins of Uferbrech. And while this is essentially true, there is much more to Camp Thrifty than just piracy.   The town sits at the mouth of Miresend Creek on the Sunside edge of Tokaru, and at the southern edge of Echo Flats. The creek trickles out between low dunes and mangroves, and the large tides of the Uferbrech Archipelog retreat every 3 months to reveal wide expanses of mud and shallow reefs.   The bay has a number of larger islands, which are little more than sandbanks, but enough to keep two wooden forts that serve as the main protection to the Camp. Between these runs a channel known as The Dredgeway that allows fort year-round access from deep waters beyond the reef to The Tethers where goods are loaded and unload, or to the Spindrift, where the majority of the town's itinerant population sleeps in their boats and rafts upon the shallow waters.   The centre of the Camp is dominated by a rocky outcropping that rises above the mud and silt at the mouth of the creek. Referred to as Thrift Rock, this is where the small number of permanent buildings sits. This includes the Coinyard, the local vault which secures the weakth that changes hands in town, and also ironically doubles as the local jailhouse.

There are two local establishments, both known for debauchery and shenanigans, called the The Pious Fool and The Skull and Duggery. The two venues have a friendly rivalry, and in most cases, the revelry will continue unabted between the two establishments and across the many private parties on beach or upon the water.   Most hours of the day will see people actively partying in Camp Trhifty, but it goes into overdrive every 3 months during the Moontide trials.

Camp Thrifty is run by a collection of individuals who were suggested by their peers.  It isn't quite meriticracy, nor a democracy, nor an autocracy, but a chaotic shambles of all three.  The organisation given to governing is known as The Trusted Few, and the two most respected members are Tasido Diamond  and Camp Thrifty;'s founder Argenti Mirantor.

Two wooden forts are built above the waters of the bay, on either side of the Dredgeway.  The Trusted Few will provide people to gaurd the towers according to an ever changing roster.  They are there to sound alarm if any invading forces are detected.  There are no clear defences other than that.  If the alarm is sounded, its every person for themselves.

Camp Thrifty came together as a temporary hiding place for smugglers and pirates, and over the years developed into a semi-permanent campsite.  Argenti Mirantor is credited as the official founder, when whe secured agreement with the Protectorates during the invasion of Tokaru to keep the Camp as an official neutral ground in the ongoing wars.   The camp became a relatively secure place of refuge for survivors of the Fall of Tokaru, and many of the Motu who made a new home there have intergrated uneasily within the community.

Most of the Camp is made from temporary shelters - tents or simple wooden forts and warehouses.  The exception is the Coinyard, which is made from stone and strong foundations atop Thrift Rock.   In recent years, the other obvious exception is the suddent and mysterious appearance of The Dart  on the southern bluff.

Held every three months, the trials at Camp Thrifty feature feasting and killings in equal measure.

Whatever the nature of the deal, no questions are asked. But equally, no trade can be made in Camp Thrifty without the involvement of a Dealrunner.

The Scribing of Skud Nelson

Skud's target had been some nobody merchant from Sudengard. Apparently, he'd done a tricksy on someone important, or at least someone with enough coin that meant Skud knew not to ask any questions.

The Skull and Duggery is one of the taverns at Camp Thrifty.. It is a three-story circular building high upon Thrift Rock which allows revellers to party while bathed by the permanent sunset upon the Uferbrech Sea

Warkudi's Pavilion of Remedy and Repose

The Pavilion offers the people of Camp Thrifty healing services - for a price - and woe to those who fail to make payment.

Answering: "a settlement known as a pleasure town or for louche behaviour"
Visit Ononomad's Competition Page Check all other answers to this prompt Competition Homepage

Interesting location, this is a good candidate for best settlement. It has just enough for one to want to know more and satisfy the reading. One thing I would like to know more about is where all the people come from and what they get from the ruins? How does the economy workaround in the settlement? All that considered, well done!   And may I ask what you used to make that beautiful and equally so interesting and informative map?

Thanks for the great feedback, I'm glad you like it... and those prompts about the ruins and economy are perfect for my Worldember pledge! The ruins themselves are a really at the heart of the conflicts in Uferbrech, with the Motu defending them and multiple factions wanting them for many reasons from treasure-seeking, knowledge of the ancients and more sinister seekers of dark powers. There's also an element of the place being a refuge of sorts from persecution within the Protectorates. All of which i hope to get into more detail with...   And glad you like the map too... I hand drew the basic map, and then scanned into Photoshop for all the colouring, shading and parchment styling etc. Takes a while, but i find it therapeutic.