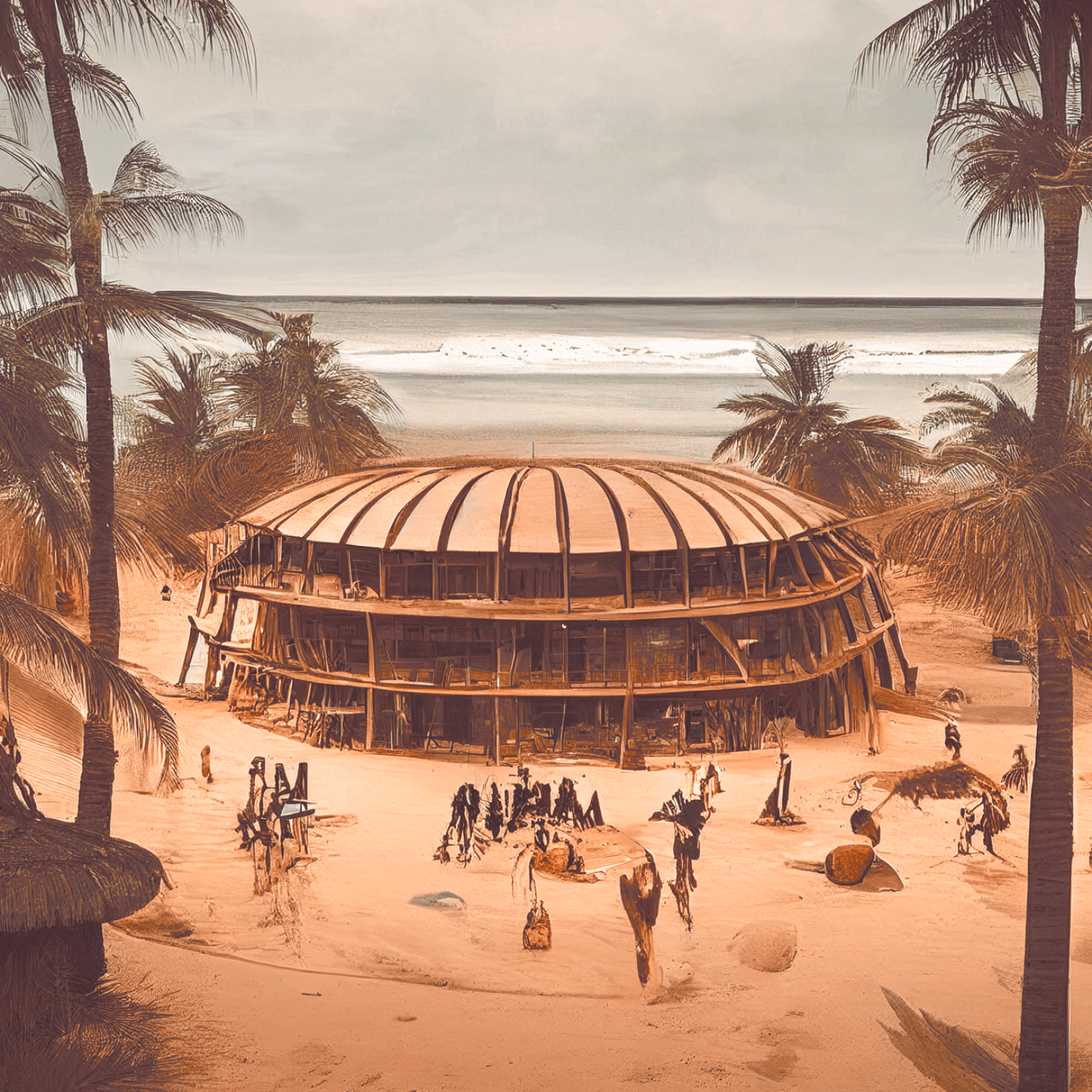 Shadowfire      Tokaru      Camp Thrifty      The Skull and Duggery
The Skull and Duggery is one of the two official taverns at Camp Thrifty and maintains a friendly rivalry with The Pious Fool. It is a three-story circular building situated apon the sunside of Thrift Rock, with balconies that allow for revellers to drink and socialise while looking out at the permanent sunset upon the waters of the Uferbrech Sea.

It was only the third night of the Moontide trials, and no-one looked like the revellry was slowing down. The place was in an uproar of cheers and laughter, and the sound brought Xilocoth back to his youth working the streets of Camp Thrifty.

From the outside, the circular two-story building looks a little ramshackle, with a wide upper balcony that curves along the beach-side, constantly bathed in sunlight, and filled with boisterous patrons who cal out to new arrivals.

The interior of the Skull and Duggery is dominated by a wide circular room, with the upper balcony surrounding a central void that extends two stories from the pool bar below to the gabled roof far above. The space is filled with light from the windows on the sunside of the building, and the constant sound of bubbling and surging water from the central pool.   High above the pool at the top of the central void, hangs the huge skull that the establishment is named for. It is nearly 20ft wide, and no-one knows what beast the skull originally came from, and many regulars have their own theories - from demon lords, to dragons, or even that it is a fake. 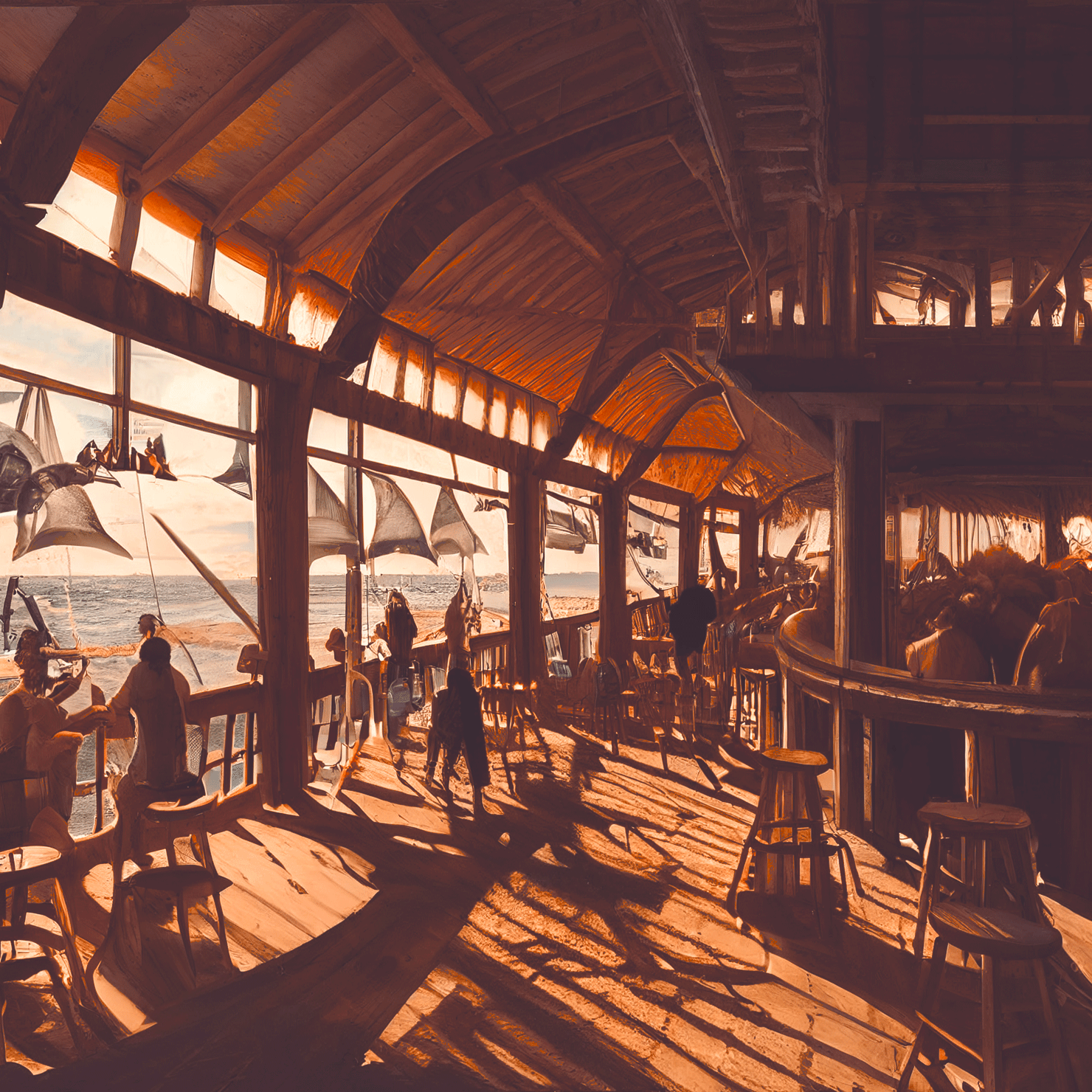 The entry level looks out over the central pool, and has a large semi-circular bar across the shadowside wall of the building. Behind this doors and corridors link to the kitchen, offices and storerooms that keep the establishment running.   Long stairs wind up from the main floor to the upper balcony, and down beneath to the underground rooms.

Xilo watched as a gangly Motu landed full belly smack down into the lower pool bar, dousing those nearby and barely missing the finned head of startled Anarchas as it tried to order its drinks. She had just launched herself from the plank up from the upper balcony two stories above, and unlike so many others, she had actually managed to get a finger hold on the huge serpent skull that hung high in the void above the heads of the cheering crowd. Her grip wasn't good though, and a heartbeat later she had plummeted down.

Small steps lead down from the entry to a large circular pool of deep water that nearly fills the lower level. The pool is complete with its own dedicated swim-up bar, and is where some of the more specialised drinks can be ordered. Th lower pool and bar was created to service the many aquatic visitors from The Tangled Fathoms, but they are often joined by their landlubber friends who fancy a swim with their drinks.   During low tides, the central pool is empty of water.

Another reveller had already lined up on the plank, shoving others aside. This one was clearly one of The Returned, all glitter-skinned and full of bravado. Xilo knew this one wouldn't make it. He was too sure of himself, too big, cumbersome. Xilo was quietly proud of the Motu girl who was even now being helped out of the pool below, being congratulated and cheered on by those around her.

The Upper balcony has interior space overlooking the pool below, with tables and chairs that tend to be dragged around in almost constant motion by the many patrons. At the top of the stairs sits the diving board, which is in near constant use by patrons, and features heavily in the many challenges - both friendly and otherwise - that the Skull ad Duggery is host to.

These smaller rooms surround the central pool, and have thick, semi-see-through windows of Coral Glass where the blurry forms of those swimming in the pool cast shifting shadows across the walls. These rooms allow for more private meetings than the open areas above, and are often the scene for secretive deals.

The lower floor also has a number of store-rooms, with trapdoors to the bar above for the loading of barrels and other stores. A narrow tunnel connects through to the rocky cliff outside, and offers a private entrance for more clandestine visitors and deliveries.

Xilo looked around the Skull and Duggery from his vantage just inside the entrance. It had been many years since he'd last been here, but it looked like it had barely changed. Vinnie Three-drinks was still positioned at the central bar, mixing his famous Zikiti Shots, and the three levels of the tavern were filled to the brim with kin from across the Uferbrech Sea, the Tangled Fathoms and Dead End Drift. There were even what seemed like a few Protectorate soldiers out of uniform scattered among the throng. Xilo would need to keep an eye on them.

The Skull is owned and run by a retired member of the Icerunners Guild called Vinnie Three-drinks. He is a blue-furred goblin kin from the Sea of Black Ice, and his most notable feature are his two mechanical arms. He is usually found fixing drinks in the smaller upper bar, and keeping an eye on the revelry as it continues unabated. 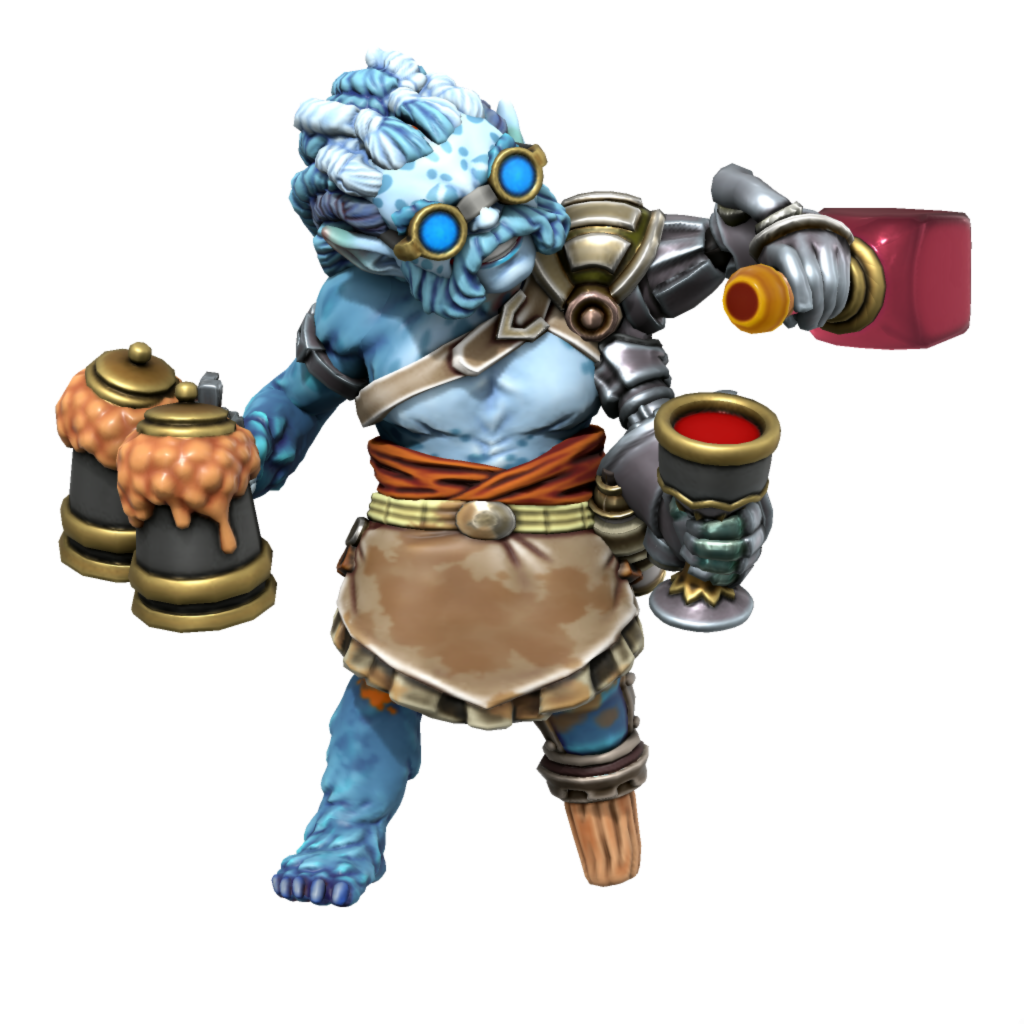 Seatex is one of the serpent kin who traditionally swim in hunting packs across the upper currents of The Tangled Fathoms. He stations himself near the lower pool bar as he quietly surveys the entire room for trouble. Seatex can slither his way up the balconies and down into the water with surprising speed, and does not hesitate to restrain troublemakers, or crack skulls with his hammer whenever needed. 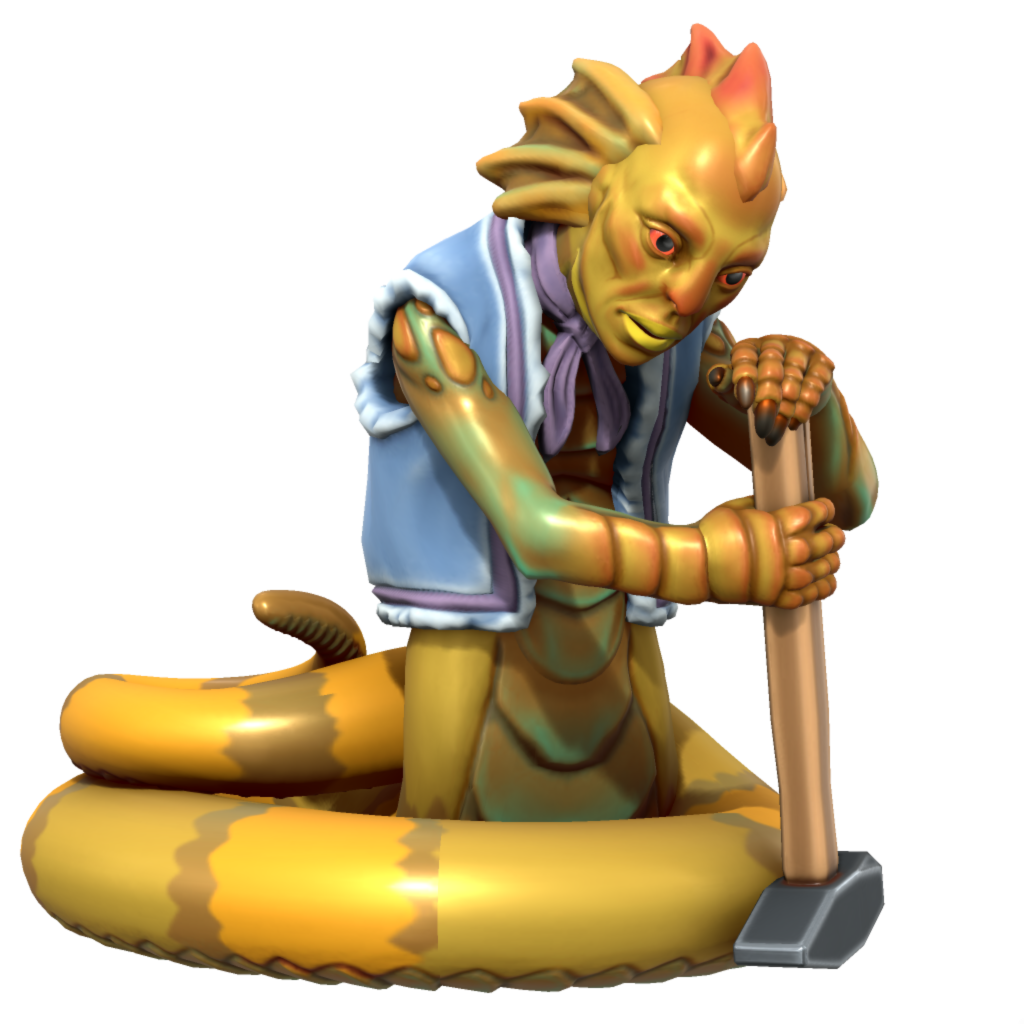 When Vinnie secured the mechanical arms from the Master Mechanics of the Stoneforged Assembly, he also brought back with him his mechanical assistant, Ollie. Ollie is permanently stationed in the largest bar on the ground floor, and has even more arms that Vinnie himself, many of which can move independently up and down the bar, and reach far across the room when needed.   Ollie can quietly collected used mugs from the floor, and has been know to assist Seatex when the crowd gets more unruly than normal. 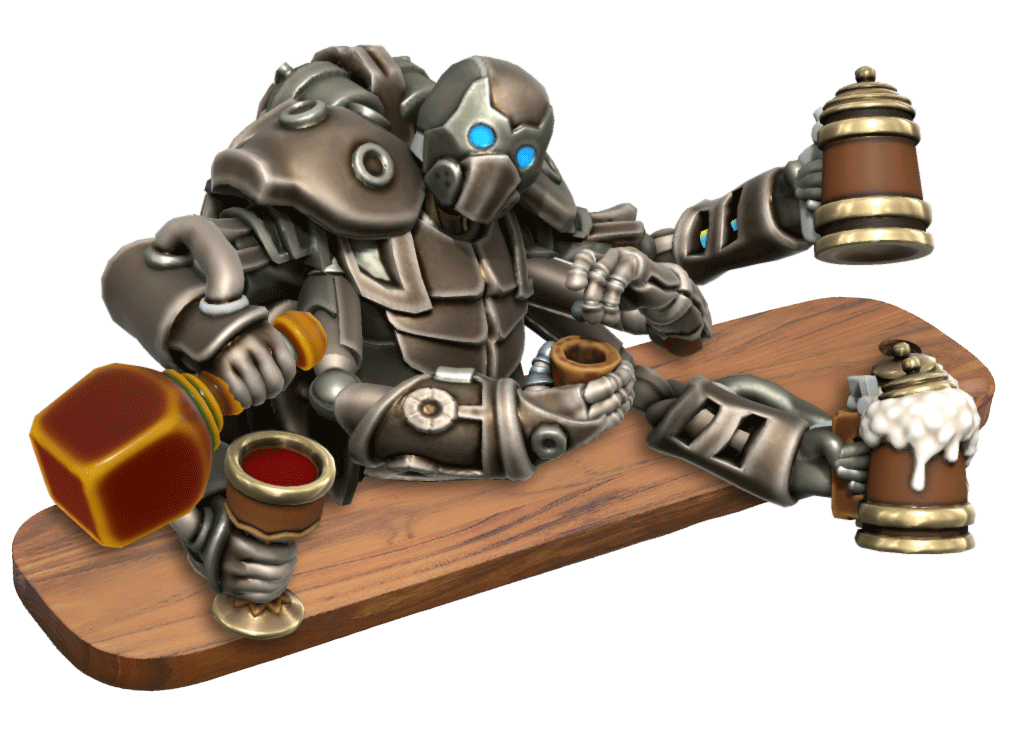 The most popular past-time is the Skull-reach. This is where punters will jump off the plank on the top balcony to try and catch on to the skull hanging above. The skull is very hard to reach, and even harder to grab onto. It is extremely rare for anyone to succeed, but many try, and there is an almost constant stream of people launching themselves off the balcony to plummet into the pool far below.   More traditional musical entertainment is provided on the stage on the top floor. Many locals will jump on stage to sing their favourite folk songs, and there will be the occassional touring band from the The Roving Vintners or from the bars at Sudengard.

Famous for Kelp Beer, Firewine and shots of fermented Zikiti Crabs. These shots combine alcohol with the hallucinogenic properties of the Zikiti into a potent brew, which keeps the spirits high and the energy levels pumping. The Zikiti shots are reserved for the Moontide trials only.

The ground floor is constructed of rough but closely mortared limestone blocks, while the upper story is a haphazzard construction of driftwood, kelp rope and shroom-leather canvas.   The walls are covered in random flotsam and jetsam, cried coral and shells, and skeletons of marine life that have been collected over the years by the many denizons of Camp Thrifty.   The wide open windows are adorned with the small hand-made windmills and chimes of various mattieral common among the Motu. These fill the air with a constant stacato percussion of the tinling of shells, the clattering of bones and wood, and the ringing of metal, sometimes tuned, mostly in a dischordant thrum.
Skull and Duggery
Open full size
Largest Tavern at Camp Thrifty
Type
Pub / Tavern / Restaurant
Parent Location
Camp Thrifty
Owner
Vinnie Three-drinks

It is a good walk through the building. I enjoyed the creative staff you came up with!

Thanks, glad you enjoyed it... i basically designed a tavern I'd like to hang at :-)

This was a fun read! I love the theme and details. It would be an interesting location to visit and explore. The staff are all unique and my favorite is Ollie. The hero forge pics of them are nicely done. I wonder if anyone has ever missed the pool when jumping to latch onto the skull and landed elsewhere instead.

Thanks for the like and comments... yeah, injury is a very common occurrence I'd say. Camp Thrifty is a rough place... but there's always https://www.worldanvil.com/w/shadowfire-ononomad/a/warkudi-s-pavilion-of-remedy-and-repose-article for those who really need it... at a price.

CANNONBALL!!!   But no that'd be rude. XD Still, the whole 'try to grab the skull' thing sounds neat! And the whole description of the place is awesome.

Not rude - expected! Of course cannonballs happen... this crew are high on zikity. Thanks fr the comment :-)

This was a short and sweet tavern article and i enjoyed the staff part of the article, A very nice article!, hope you will take a look at my tavern challenge article!, but overall a good article!

Thanks Malachi, i'm glad you liked it... Your Lovers Tavern is great too - keep u the good work :-)