The Scribing of Skud Nelson

Shadowfire      Tokaru      Camp Thrifty      The Scribing of Skud Nelson
Skud had made some bad choices in his time. In hindsight, running afoul of the Dealrunners would have been a better choice than his current predicament.

But the coin was good and it was supposed to have been easy. The kind of service Skud had been contracted for was common enough if done discretely. And discretion was a breeze once the revelry was in full swing.   It was the last 8-bell of the Moontide Trials, and most proper folk were passed out from all the firewine and zikiti on the beaches below Thrift Rock, or in one of the hundreds of vessels tethered together across the Spindrift.   Skud's target had been some nobody merchant from Sudengard. Apparently, he'd done a tricksy on someone important, or at least someone with enough coin that meant Skud knew not to ask any questions. By all accounts, the Fracas hadn't gone to the liking of Skud's benefactor, the Good Doctor himself. Even that was more than Skud needed to know - any more and he'd risk running afoul of the Dealrunners.   So Skud had taken the bonescribe and done all the formals with barely a nod and a grin.

If he could have, Skud would've sighed a long and bitter sigh at this memory.   The thing is he couldn't really move no more. He could see well enough, at least what was right in front of him. Or above him really. The canvas tent flapping. The sound of gulls squawking in the distance. The smell of some sharp booze, mixed with the taste of blood.   Skud really wished he could turn his head, lick his lips, or swallow, or blink. Anything really, but he couldn't. Not one bit. Running afoul of the Dealrunners would definitely have been a better choice. In hindsight.

Skud's target had dropped easy. The Fop had been drinking like everyone else, boasting about his win in the Fracas to anyone who'd listen, and all them who didn't care to as well.   The wine was going straight through him, and the dandy was all self-conscious and wandering off every other heartbeat to do his business behind the dunes. All fuss and fidget to undo his silks each time too. Skud just waited till he was squatting and a quick knife to the neck it was done.   Easy coin were it not?   Except Skud hadn't seen the Dealrunner had he? Bad timing it was. Just as he'd been wiping off the blade on the Dandy's frills, he looked up straight into the face of a young girl, no more than 20 or 30 moons old. Right there, all eyes and the dark ink of them coin tattoos. She weren't fearful mind, just knowing. She raised an eyebrow at him, and he could see the truth of it all over her face: Skud had done the dirty, broken armistice and gotten caught. It was the getting caught was the worst of it.   Without thinking, Skud had flailed out at her with his knife, but she was quick. It was part of her job of course. The Dealrunners stashed more track in a single moon than Skud had his entire life. All he got was a face full of sand from her heels.   Skud had fallen over, cursing his luck. He knew she'd be back with a dodgyward or two any minute. He had to get gone, or he'd be in chains and scuttled off to the Sea of Black Ice before the ringing of the next 8-bell.

Hindsight. Right?   Now. He could hear something closer than the gulls and the flapping of the tent above his head. A soft tapping sound, real close, but just out of sight.   Tap, tap, tap.   And someone gently humming some sort of tune he couldn't quite place. He really wished he could turn his head.

Skud had been all a panic after the Dealrunner had sprinted off. Looking around for somewhere, anything. He hadn't been thinking straight. He was between crews, so there were no boats to lie low in. That was one of the reasons he'd been so keen for the coin.   So he'd scrambled up and over the dunes, down onto the mudflats and through the shallows towards the north beach. While running, a desperate plan had formed. His benefactor would help him out of this. He'd have to, otherwise they'd both be in chains. He head straight to where he'd signed the deal with the Good Doctor.   He had heard the horns blaring atop Thrift Rock and echoing across the waters behind him. He remembers stealing a look back to them on the mud flats, hollering and pointing at him.   Scrambling up the north beach, ducking beneath the canvas eaves of the Pavilion of Remedy and Repose. Empty. All them cots empty.   "Warkurdi!" he had gasped, shrill and thin.   And then there had been a sudden flash, something sharp and bright behind his eyes, and a roaring in his ears.

And now there was just the flapping of canvas, that tap, tap, tapping and a tune he couldn't quite place.   Someone nearby cleared their throat.   "Is this him?" A deep warbling voice.   "Yes." Young, a girl.   The tuneless humming stopped, and a third voice, this one familiar and rasping.   "It was such a thing." it was the Good Doctor speaking soft, "I heard the alarms, and saw this one running across the shallows. He collapsed as soon as he got here."   "He broke Armistice."   "Well, he's beyond us now. I've seen this before. Too much zickiti you see. It's probably what caused the violence too."   "Is he... dead?"   "I’m afraid so.”   "Well, debts been served then I guess."   The voices were moving away now, and Skud wanted to scream at them. He wasn't dead. He knew this, he could feel it like the blood in his mouth. Had he bitten his tongue? There was a dull ache in his eye sockets. He wanted to blink.
And then, the face of his benefactor swung into view just above him, looking down. Warkurdi, The Good Doctor, with his deep red and charcoal skin. His yellow eyes wrinkled in a smile.   "Skud, you poor fool."   Skud could see what Warkurdi was holding in his hands. He had that bonescribe in one had and the rolled up sheet of kelp in the other. Warkurdi tapped the kelp-sheet with the bone.   Tap, tap, tap.   "You should not have tried to come back here, you know. This..."   Tap, tap, tap.   "This clearly says not to risk implicating me in the performance of your duties. It was what we call a condition. And for you, quite a significant one." 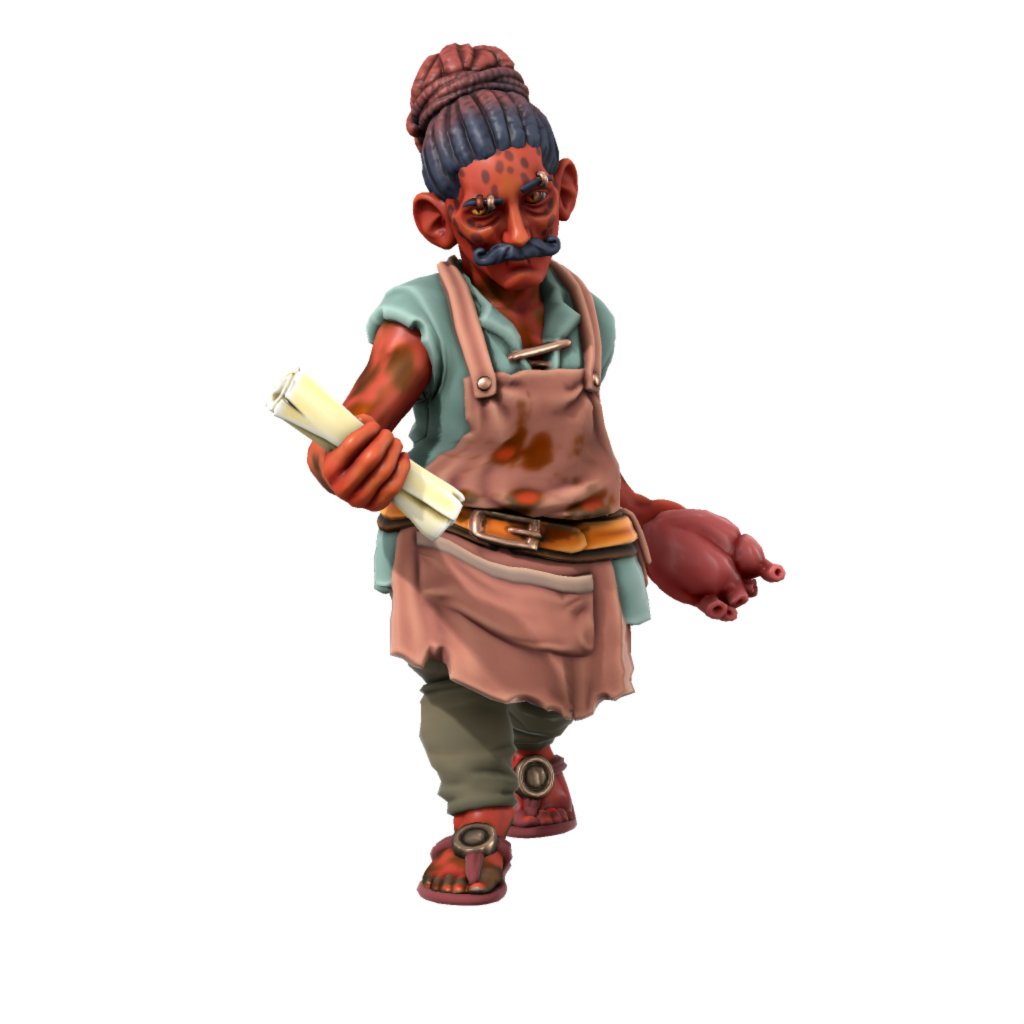 by Ononomad, using Heroforge.com
Skud willed himself to roll, scramble, run.   Plead. Cry. Whimper.   Nothing.   Tap, tap, tap.   "And, in the eventuality of you being unable to complete ALL the conditions of your contract, which you have NOT. Then other clauses come into play."   Skud saw Warkurdi motion to someone beyond his vision.   "Let the delegation know their next delivery will be a little earlier than expected."   Warkurdi turned back, and beamed down at Skud.   "Well, this has been quite a lucrative day!" he chuckled, " for me at least!"   And then he stood up, and returned to humming his tuneless song.   Skud listened as Warkurdi's tune faded into the distance, lost amongst the gulls, the flapping of the tent, and the distant sounds of the continuing revelry down at the beach.   Skud had made some bad choices in his time.

The following articles are featured in Skud's unfortunate downfall.

Held every three months, the trials at Camp Thrifty feature feasting and killings in equal measure.

Whatever the nature of the deal, no questions are asked. But equally, no trade can be made in Camp Thrifty without the involvement of a Dealrunner.

Warkudi's Pavilion of Remedy and Repose

The Pavilion offers the people of Camp Thrifty healing services - for a price - and woe to those who fail to make payment.

Owner and proprietor of the Pavilion of Remedy and Repose in Camp Thrifty, Warkudi is a firetouched and descended from the devils that invaded during the Destruction.

Bonescribes are tools used across the lands of Shadowfire to record agreements and contracts.

Written for Spooktober 2021, in response to prompt#11: Bone