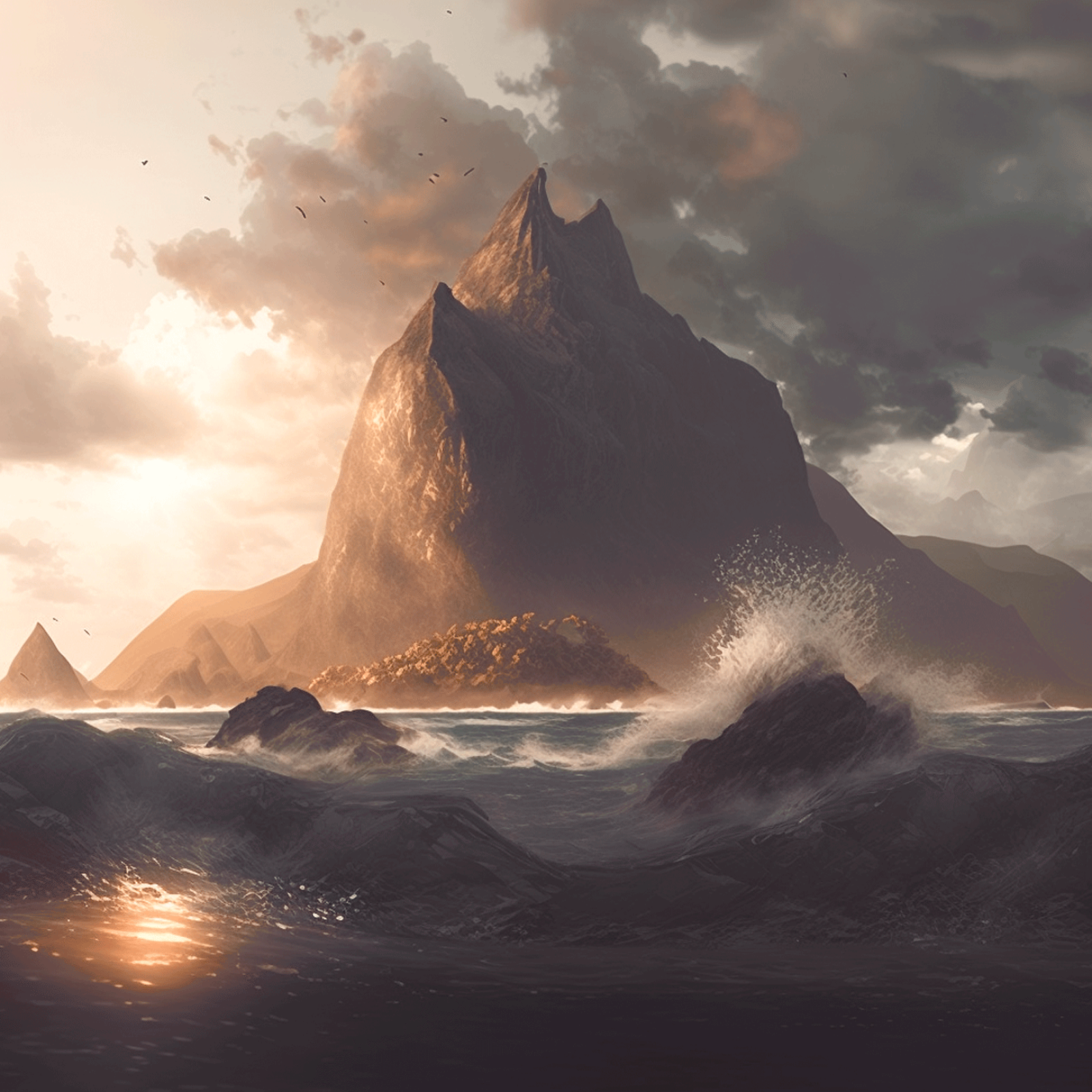 Shadowfire    Geography and Nations      Lands of Twilight      Uferbrech      Tokaru
Shadowside island of Uferbrech, where the Protectorates outpost of Omberstad struggles to establish control against the growing resistance of the Motu .

The island of Tokaru slides out of the shallow seas on its western side, dominated by a twisted chain of mountains down its middle, constantly veiled by huge clouds of mist and sleet, blown in from the Sea of Black Ice by the relentless winds. Tokaru's shadowside coasts end in huge black cliffs of volcanic rock which crumble and fall into cold deep waters.   The western slopes of the island are a chaotic and wild patchwork, with forests of hardwood trees growing on the deeper soils and wide rolling grasslands rolling over hills covered in clumps of sharp boulders spiking through the grass.   Where the western slopes meat the sea, there are mangrove swamps and vast plains of sharp corals and rock-pools that get exposed by the large tides.   A massive central valley lies in the centre of the island, between the southern and western mountains. The valley is deep with volcanic soil brought down by the rivers and waterfalls. The shadowside slopes of the mountains are near vertical and bare, with their strata of grey and charcoal twisted and cracked. The range towers over the valley below, and is streked with thousands of waterfalls.   Tokaru is wet and cold. Sleet and snow storms are common on Shadowside, but quickly melt and fall as rain as the air comes in contact with the warmer flows coming from the Sunside of the range.   The sunside slopes are relatively dry and warm, but enough water makes it over the peaks to keep the land lush beneath its dim sunlight.   There is much volcanism on the island, with frequent earthquakes, and active volcanos on the southernmost range. beneath the main ranges further north and towards the eastern coast where Omberstad lies there are numerous underground sources of hot water and steam that rises, pools of bubbling mud and geysers.

The Eastern shadowside cliffs are home to huge flocks of cold-climate water birds which nest in the relative safety of the clifftops.  The are amphibious, in that they use their wings both for flight, and for swimming when they dive for fish in the deep oceans.    In the warm volcanic regions on the shadow side of the mountains, great spore creatures live - mobile and semi-sentient fungi.  Not as advnaced as their distant relatives in Glimmertown , they do tend quietly to their patches of fungal forests and defend territory against incursion.   On the sunside slopes, there roam vast herds of small horse-like creatures that graze the pastures.  These are preyed upon in turn by giant predatory birds that live atop the ranges, nesting along the leeward side of the peaks, looking out towards the never setting sun across the Uferbrech sea.

The constant upstreaming of hot gases, laden with minerals, brought up by the hot springs and geysers, when it meets the cold prevailing winds from the east cause a curious chemical reaction.  The gases turn phosphorescent, and are pushed west and up the sides of the Mountains.  The cliff faces  are constantly covered in glowing streaks of bright green and blue mist that snake up the faces like the spirits snakes.   The Motu refer to them as the Nagakahi, and their stories say they are the spirits of those who died in the Destruction that are returning home from the edges of the Universe where they were scattered.   The central mountain range drops to a pass about midway down the island, allowing relatively easy passage between sunside and shadoswide.  The pass channels the winds coming from the Sea of Black Ice into a constant howling gale.  The Motu originally set up many wind-wheel contraptions to harness the power of these winds for the grinding of foods and other mateirals.   A scholar, visiting from New Lafaelle, discovered the ruins of these contraptions, worked out their purpose and was inspired to expand upon them.  They worked out how to use the wind-power to feed a network of pipes and tunnels to channel hot spring water back to Omberstad to help warm and power the outpost.

The range of mountains that runs north-south along the Sunside coast of Tokaru is named after the mythical steed of the Motu hero Aetora.

Omberstad is the only deep water port on Tokaru. The town, and fort that looms above it is carved in layers up the sides of the black cliff faces surrounding Port itself, known as the Blackpool.The town is ruled with an iron fist by the Lord Protector Ack

An outpost of Motu who have managed to keep a foothold on their home island. Controlled by the fiercest of the The Talons of Aetora, to ensure they retain access to the Eyrie in the mountains.