Inham Farms is a farming town situation to the North of Arrasgoth. The town lies just before the large mountain range known as the Rugged Highlands that sits at the top of the continent.   It is the biggest trade hub and the source of most of the agriculture within the continent. The town consists of large farms spread out amongst the smaller housing and shopping districts, though it does hold a large church dedicated to the goddess, Tasdia, Goddess of Nature.

One of the most interesting livestock that is brought up in Inham Farms is the Battle Ostrich. These creatures are specifically bred here, though there has not been much use for them in battle as of yet.

Inham Farms is predominantly made up of a population of farmers, normally from the same families who have been born and raised here. Most are in the working class, focusing on hard labour and supporting themselves through the work they do on the farms.   Of all the farming families, the oldest and wealthiest are the Weis family who first set up Inham Farms over 900 years ago. Their wealth has increased recently in the last twenty years due to the increase of trade with Egomont and other major cities and towns in the continent.

Inham Farms is run as an equal community. There are no taxes that are raised here as the land is available to all as long as they are willing to work hard and share their resources with the town and the trade network.   Daelar Weis is the current unofficial mayor of the town and most defer to him on matters that need a higher authority. This also means that he is part of the Council of Capitals.

Inham Farm was originally not well defended, with the majority of the population being common farmers. However, due to the recent alliance between the town and the tribal settlement, Barren Moor, there are now more guards in place and the wall surrounding the main settlement has been fortified and expanded upon.

It goes without saying that the main trade of Inham Farms is agriculture. They maintain their own farms, make sure their own town is fed and well catered for, before exporting to Egomont and further. Their other main export is their continent-renowned cider.

The infrastructure of Inham Farms is focused on farming and setting up the most efficient and well run fields possible. It was built on a river to give easy access to water and the town grew up around that as the central focus. The farms have been laid out to fit with the growing seasons and there is never an empty field in Inham Farm as there is always a family working on it, whether that's ploughing, sowing, growing or harvesting.   Most of the industrial steps that the town has taken have been towards fortifying the walls of the main housing settlement of Inham Farms. The walls were created as a safety precaution due to the nearby forest and mountain being an easy way to be attacked, but most of the town is an open border.

The biggest asset of Inham Farms is the food itself. Without the supplies that the town provides on bulk to Egomont and beyond, the infrastructure of Arrasgoth would very quickly crumble.

There are no real guilds in place at Inham Farms, though the farmers themselves would classify as a guild. Their financial and political developments all work towards making the town a thriving agricultural metropolis.   Trax's Goblins live on the outskirts of the town wall. They have set up a small base of operations on the Eastern side. They mostly stick to themselves and occasionally disappear for weeks on end to their other settlement.

There are not a lot of tourists that tend to visit Inham Farms, mostly as all it really contain is farmland. However, those that do visit look for the farmed Battle Ostriches and the hardcore apple cider that they produce.

They say the best weddings can be had in Inham Fields during summer; seeing the smiling couple walk through the lush golden wheat fields, like walking through waves of gold!
— An older woman to a younger woman near the fountain.

Inham Farms is found upon a large, fertile stretch of land, overshadowed and protected by the large mountain range behind it. There is a large river and lake that runs alongside and through the settlement giving access to fresh water and irrigation at all times. It is also sheltered by trees that are tended by the druids that live within the settlement. 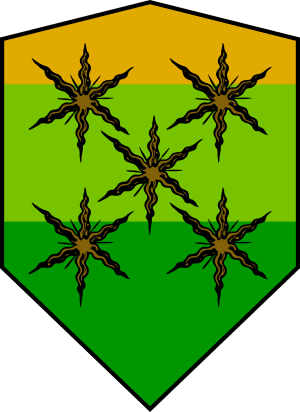 Arrasgoth is a custom roleplay setting based in the system of Fifth Edition, created by OncomingShower.   Arrasgoth draws inspiration from many different settings and lore within the Fifth Edition universe as well as other historical settings and events, under the Open Game Licence.   Dungeons & Dragons belongs to Wizards of the Coast and she claims no ownership of it.   All crests and portraits were created at World Spinner using either the Portrait Workshop or the Heraldry Editor.   All headers and cover art created at Canva using free images on their website.
Article template
Settlement
World
Arrasgoth
Category
Major Settlements in Arrasgoth Locations
Author
oncomingshower
Publication Date
25 Jan, 2021
Creation Date
25 Jan, 2021
Last Update Date
25 Apr, 2021
Visibility
Public
Views
180
Favorites
Comments
0