Whitewall is a large town in the centre of Arrasgoth, found North of Egomont. The town is on the main road between Inham Farms and Egomont, at the base of the unnamed lake. Their main industry relies on the spice trade.   The settlement is an urban settlement with an ancient fortress in the centre that has been partially abandoned for at least 1000 years. The town gets its name from the surrounding white walls of the fortress that the town built itself around.

Whitewall is a mixed race settlement, predominantly human and elven in the majority. It is on a main route so has a lot of adventurers, merchants, and travellers wandering through. The town is all working class despite the large fortress in the centre.

Whitewall is a feudalistic town with a lord as its official leader who doesn't live within the town itself. There is no community leader within the town and most live by the rules set in place by the lord. It is believed that the fortress was once the home of the lord's ancestors.

Whitewall is one of the better defended towns in Arrasgoth due to the walls itself. The town is built around the outside of the walls but in the event of an attack, most of the town will hide itself behind the strong stone walls.

The infrastructure of Whitewall is focused on the spice trade. They have small workshops around the edge of the inner wall where the majority of the populace work and create the spices. The main habitation areas are spread around the outer circle of the spice workshops.

Whitewall is one of the older settlements but not much history has happened there previous to the current few years. It was rumoured that a large beast lived inside of the fortress after it was abandoned by the previous lord for a place in the countryside. However, this beast has since been dealt with by The Beacons of Hope. It is unclear what beast was inside of the fortress.

Whitewall is built on a low plain not far from Casia Forest but it makes very little use out of the natural resources nearby other than to tend to their spice trade. They lie not far from the large unnamed lake towards their south so have access to fresh water. 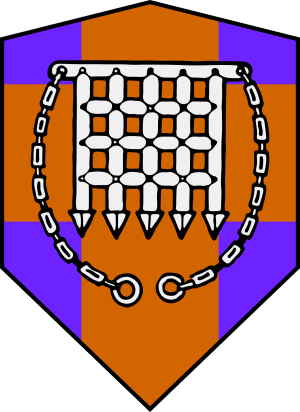 Villager: Sure, the Beacons of Hope are fighting for the people and done many great things, but what example do they set for the children? That all problems can be sorted with violence and magic? Where's the lesson in working together as a community to strive for peace!

City Watch: Ma'am, I just make sure people don't break the law. Can you move along please; your cart's blocking the road.
— Villager to city guard
(6th Tomifin 0 UOK)

Arrasgoth is a custom roleplay setting based in the system of Fifth Edition, created by OncomingShower.   Arrasgoth draws inspiration from many different settings and lore within the Fifth Edition universe as well as other historical settings and events, under the Open Game Licence.   Dungeons & Dragons belongs to Wizards of the Coast and she claims no ownership of it.   All crests and portraits were created at World Spinner using either the Portrait Workshop or the Heraldry Editor.   All headers and cover art created at Canva using free images on their website.
Article template
Settlement
World
Arrasgoth
Category
Minor Settlements in Arrasgoth Locations
Author
oncomingshower
Publication Date
19 Feb, 2021
Creation Date
14 Feb, 2021
Last Update Date
20 Mar, 2021
Visibility
Public
Views
140
Favorites
Comments
0