Bayvale is a small town in the North of Arrasgoth, found to the South of the ruins of Blossoming Sands. The town lies not far from the mercenary camp, Purgatory.   The town is a farming settlement that focuses on cultivating their wide range of exotic vegetables.

Bayvale is predominantly a mixture of humans and elves, though they are not strangers to the lesser seen races due to being so close to the capital, Egomont. They are a friendly village and welcome all types of people to stay with them and enjoy their vegetables. There is a large amount of druids settled here that help grow the exotic vegetables.

Bayvale is run as a democracy and a new leader is elected every year to make the system and the town as fair as possible. Anyone is eligible to put themselves forward to be elected.

The town itself is somewhat of a defence as the druids that inhabit the town have set up wards all the way around it in case of attack. It is magically defended on all sides by spells and glyphs.

The infrastructure of Bayvale is focused on the cultivation of their thriving vegetable trade. They are not wholly focused on profit, more of the exploration of different types of vegetables they can grow. Their settlement is built like a large garden in itself, with the houses becoming part of the growing process.

Bayvale only contains one guild which is the Cylch O Sêr that is a major druid faction in Arrasgoth. They have a few members dotted around the continent but most of them live within the sanctuary of Bayvale.

Bayvale has become its own geography as the town has become somewhat of a huge garden rather than a settlement in itself. There was plenty of trees, vines, greenery and vegetables all surrounding and inside the town and houses. 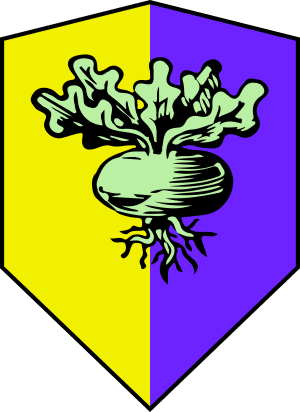 Druid One: Can't wait for the vegetable show this year! Got me a real winner for biggest this year, I reckon!

Druid Two: You're not the only one who is excited. Elsbeth, the new judge, is as well from what I heard.

Druid One: Dude, of course she is! She takes home the winner...and she's single.

Arrasgoth is a custom roleplay setting based in the system of Fifth Edition, created by OncomingShower.   Arrasgoth draws inspiration from many different settings and lore within the Fifth Edition universe as well as other historical settings and events, under the Open Game Licence.   Dungeons & Dragons belongs to Wizards of the Coast and she claims no ownership of it.   All crests and portraits were created at World Spinner using either the Portrait Workshop or the Heraldry Editor.   All headers and cover art created at Canva using free images on their website.
Article template
Settlement
World
Arrasgoth
Category
Minor Settlements in Arrasgoth Locations
Author
oncomingshower
Publication Date
20 Feb, 2021
Creation Date
14 Feb, 2021
Last Update Date
20 Mar, 2021
Visibility
Public
Views
139
Favorites
Comments
0