Finder's Glen is a large village settlement in the South of Casia Forest. The settlement has one road connection to Hamlet on Casia Main and do trade often with Prosperity Bay. The camp is surrounded on all sides by forest and lays near a lake.   Finder's Glen is one of the youngest settlements in Arrasgoth. It was directly impacted by The Beacons of Hope as they not only helped clear a previous site for them to move back into. They also helped the gnomes to name their settlement 'Finder's Glen'. Since then, the gnome population has continued to grow.

Finder's Glen is the biggest gnome settlement in Arrasgoth. They are friendly, open to visitors and always willing to share their ideas, food, and village with those that visit. They keep to themselves in the forest but many of them venture out to discover new places and new things.

Finder's Glen is run as a gerontocracy by the elder and the large majority of the population support this. There are few that disagree with this rule, those that do tend to keep it as low grumbles to themselves rather than actively dissent.

Finder's Glen is defended by the trees that surround it and the rangers that lay in the trees to keep predators at bay. Other than these, it is mostly open and quite easy to attack.

The infrastructure of Finder's Glen is based around survival and exploration. Their very being is focused on finding out as much as they can and making sure they can survive using what they do find.

Finder's Glen was originally a community of gnomes and had no real home due to their previous settlement becoming uninhabitable. The Beacons of Hope helped clear the lake of a banshee that had settled there, allowing the gnomes to return to their half-built previous base and settle there once again. They also helped Kelston come up with the name for the settlement by merging his two choices into one. The village has continued to grow since then.

Finder's Glen has an abundance of trees due to its position inside of Casia Forest, meaning they are never lacking in wood. They are settled near the edge of a lake inside the forest so have easy access to fresh water at all times. They are good foragers so they are able to make use of all the naturally growing produce within the forest. 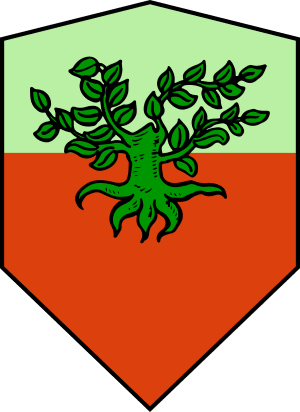 There's nothing like finding yourself needing to rest at Finder's Glen. The people are nice, the woods provide shelter and the lake reflects the positive outlooks of the people.
— A recent traveller through Casia Forest
(1st Hivadeb 0 UOK)

Arrasgoth is a custom roleplay setting based in the system of Fifth Edition, created by OncomingShower.   Arrasgoth draws inspiration from many different settings and lore within the Fifth Edition universe as well as other historical settings and events, under the Open Game Licence.   Dungeons & Dragons belongs to Wizards of the Coast and she claims no ownership of it.   All crests and portraits were created at World Spinner using either the Portrait Workshop or the Heraldry Editor.   All headers and cover art created at Canva using free images on their website.
Article template
Settlement
World
Arrasgoth
Category
Major Settlements in Arrasgoth Locations
Author
oncomingshower
Publication Date
19 Feb, 2021
Creation Date
5 Feb, 2021
Last Update Date
31 Jul, 2022
Visibility
Public
Views
175
Favorites
1
Comments
0