Barren Moor is a large military and tribal camp settlement to the North of Arrasgoth. The settlement lies between North Rock and Catagon in an area that is predominantly barren of vegetation other than a small druid grove that has been tended to over the past 1000 years.   The camp is a mercenary settlement and their only trade is in sending their people to help caravans and towns. The camp previously consisted of lizardfolk and human druids who were previously slaves of the tribe until the death of the previous military leader at the hands of Emrys Ddraig Sy'n Ddu over a thousand years ago. Since then, the population has become a mix of the two races, with a handful of half lizardfolk in the mix.

Barren Moor is made up of predominantly lizardfolk, but since the integhration of human druids, the population has started to vary over the years, with mixtures of half-lizardfolk mixed in. They keep amongst themselves and it is rare that they leave the tribe for anything other than work. They keep to themselves and prefer to stay out of the business of Arrasgoth as a whole, but will intervene when it is desperately needed. They only get involved in wider politics when their own tribe is at risk.

Barren Moor is a kraterocracy run by their chief. The chief is elected by winning a battle against the previous leader and killing them. Previously, the tribe had been run by two chiefs, one military and one domestic, but after the take over by Emrys and the handover to Jaz as the full chief, they have stuck to only one chief who rules both.

Barren Moor is defended by the people that inhabit it predominantly. They are well trained fighters and are able to hold off most threats that come their way. Their other defence is the lack of resources nearby which cause the area to be almost uninhabitable for most races.

The infrastructure of Barren Moor is focused around training and being strong. They pride themselves on being a strong tribe, even those that are older or smaller within their tribe. They are built in a barren place so water and food is hard to come by, so they focus on gaining their resources from the druids that grow food for them and their trade deal with Inham Farms.

Barren Moor itself is a faction within Arrasgoth as the only lizardfolk tribe in the continent itself. They work for themselves but have a tentative deal with Inham Farms to protect them in return for resources they cannot grow themselves.

Barren Moor has steadily grown over the years with the impact of the growth of Inham Farms after the The Union of the Kingdoms. They have continued to grow and merge with the human druids, increasing their population and the area they own. Barren Moor has now become a mixture of a military camp and a tribal settlement, growing and adapting with the differences in races.

Barren Moor has no natural resources as it is a barren plain. However, the rocks that can be found here are sturdy and can be used for building strong defences. The settlement is a tribal spread of tents and a large manmade garden, tended by druids. 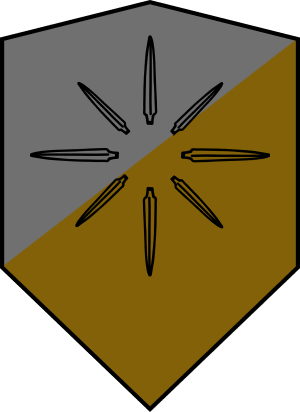 Have things been better since that weird dragon man killed the boss and disappeared?
— Visitor to one of the lizardfolk
(3rd Etefin 1 UOK)

Arrasgoth is a custom roleplay setting based in the system of Fifth Edition, created by OncomingShower.   Arrasgoth draws inspiration from many different settings and lore within the Fifth Edition universe as well as other historical settings and events, under the Open Game Licence.   Dungeons & Dragons belongs to Wizards of the Coast and she claims no ownership of it.   All crests and portraits were created at World Spinner using either the Portrait Workshop or the Heraldry Editor.   All headers and cover art created at Canva using free images on their website.
Article template
Settlement
World
Arrasgoth
Category
Major Settlements in Arrasgoth Locations
Author
oncomingshower
Publication Date
15 Feb, 2021
Creation Date
5 Feb, 2021
Last Update Date
31 Jul, 2022
Visibility
Public
Views
184
Favorites
2
Comments
0