The village had previously been mostly human and elven in population, focusing on hard labourers who worked with the stone itself.

The village had been run by a lord who owned the land. The villagers paid the lord to live there and everything was shared between the families and the lord.

Catagon had no real building defences in place but had a small town guard that protected it. Their buildings were one of the only settlements in Arrasgoth to use stone rather than traditional wood so it made it harder for anyone to break them down.

Catagon had mostly traded in granite with other settlements, especially with Egomont to help build up the capital buildings.

The infrastructure of Catagon was focused on the mining of granite and this reflected itself in the build of the houses themselves. They were also not far from the forest so had a good network of hunters amongst them.

Catagon had been founded just under 150 years ago by the lord at the time with his family. The population had been made up of those he had taken with him from Egomont and the village grew up around his estate.   During the recent year, a plague swept through the village, caused by the entities known as the Darkness which could not be stopped or halted. This resulted in the death of every man, woman and child other than four who had been out hunting in the nearby woods. The plague was focused only on the village and did not affect any of the surrounding areas so was presumed to be magical in origin.

Catagon had Casia Forest nearby that gave them access to wood, water and hunting. They were also on a main road so transport was easy for them to get between the more major settlements. They also had a large granite deposit that they mined. 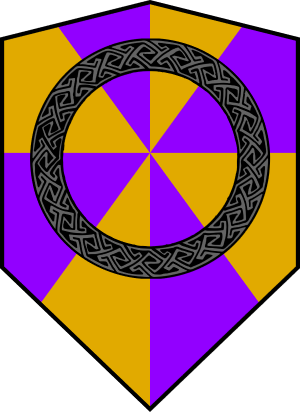 Villager One: I'm bored of mining. Can we swap for the day and I'll go hunting instead of you and you can go to the mine?

Villager Two: I think they will.

Arrasgoth is a custom roleplay setting based in the system of Fifth Edition, created by OncomingShower.   Arrasgoth draws inspiration from many different settings and lore within the Fifth Edition universe as well as other historical settings and events, under the Open Game Licence.   Dungeons & Dragons belongs to Wizards of the Coast and she claims no ownership of it.   All crests and portraits were created at World Spinner using either the Portrait Workshop or the Heraldry Editor.   All headers and cover art created at Canva using free images on their website.
Article template
Settlement
World
Arrasgoth
Category
Ruined Settlements in Arrasgoth Locations
Author
oncomingshower
Publication Date
15 Feb, 2021
Creation Date
14 Feb, 2021
Last Update Date
29 May, 2021
Visibility
Public
Views
125
Favorites
Comments
0