Prosperity Bay is a large port town on the Southern coast of Arrasgoth. It is the main port of the Usma Region. The town is found at one end of a major road towards Egomont.   Prosperity Bay was originally gifted to Jebediah by his father, but now belongs to Captain Gawain through a mutual deal between the halfling and the pirate. The town has become considerably more prosperous since this deal.

Prosperity Bay is a mixture of races, due to becoming not only a more popular port town, but also the influence of the pirates that rule it. There is a large majority of halflings that live there from the previous ruler's influence, but this is very quickly diminishing due to the settlement of other races. Around 20% of the population are of pirate origin.

Prosperity Bay is run as a democracy despite the reputation pirates have of being more dictatorial in their approach. Every inhabitant of Prosperity Bay is happy with the current ruler and has chosen him to be the leader wholeheartedly. This is also influenced by the poor running of the previous ruler.

Prosperity Bay protects itself through both the open water and the large amount of pirates that are settled here. Though there are no structural defences in place yet, houses are slowly being reinforced with metal found from treasure hunting. The pirates are also quick to deal with any intruders.

Prosperity Bay has become a trade hub for water exports which brings in gold to their town. On top of this, The Green Knight sets sail almost weekly to explore the coast for treasure and often brings back hundreds worth of gold treasure for the town. They are perhaps one of the most profitable settlements in Arrasgoth.

The infrastructure of Prosperity Bay is now focused on port trade and treasure hunting, due to the influence of the pirates that have settled here. Since Captain Gawain has been running the port town, it has gone from strength to strength, with houses, shops and resources being updated and renewed monthly with the income being generated from trade and treasure.

The main guild, though not a traditional guild, is the fleet of Captain Gawain, and its flagship, The Green Knight. The fleet is part of the faction of Peregrine Bay but has been known to sail under its own banner due to its alliance with The Beacons of Hope.

Prosperity Bay has had some turbulent history in the past two years. It was originally run by Jebediah but it was uncovered that he had not paid anyone in his town since it had been granted to him. His bodyguard and manservant, Montgomery had been hoarding all of the town's money and Jebediah's, stealing it for himself.   After this discovery, and the swift departure of the halfling ruler to run with The Beacons of Hope, the town found itself leaderless. Captain Gawain of The Green Knight saw an opportunity, seized the town and started making it, as its name implies, prosper.   On the return of Jebediah to the town, he handed the town officially to Captain Gawain as he felt that it was being run better by him than it had been. This was agreed and the town was left in the now legal ownership of Captain Gawain.

Prosperity Bay is on the coast so has access to salt water but not a lot of fresh water. There is a well that has been built to supply fresh water to the town. They have access to fishing and ground to grow food. They are not too far from a natural forest so can get wood. They also have access to the main road for travel. 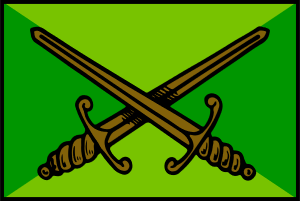 Arrasgoth is a custom roleplay setting based in the system of Fifth Edition, created by OncomingShower.   Arrasgoth draws inspiration from many different settings and lore within the Fifth Edition universe as well as other historical settings and events, under the Open Game Licence.   Dungeons & Dragons belongs to Wizards of the Coast and she claims no ownership of it.   All crests and portraits were created at World Spinner using either the Portrait Workshop or the Heraldry Editor.   All headers and cover art created at Canva using free images on their website.
Article template
Settlement
World
Arrasgoth
Category
Major Settlements in Arrasgoth Locations
Author
oncomingshower
Publication Date
5 Apr, 2021
Creation Date
28 Jan, 2021
Last Update Date
6 Apr, 2021
Visibility
Public
Views
144
Favorites
1
Comments
0