"Will Na'arin look down on me for being scared?"   "No, honey. All that matters is that you make the effort. The Necropolis is a bit frightening, but finding the right connection to the dead can bring you such peace."   "You won't tell anyone I said I'm scared, will you?"   "Of course not."
— Conversation between mother and son

The Underground Necropolis of Necros is a sacred burial site for the people of Necros. The primary entrance lies under the Temple of Na'arin in Shivano City, the capital city. The Necropolis extends into the southern portion of the Furhan Mountains, though how far it extends, no one knows.   Families of Necros commonly visit the Underground Necropolis, often to visit departed family members. Necromancers visit much more frequently, relying on that deeper connection to the dead to fuel their spells.

Minors are not allowed into the Necropolis unaccompanied. Access points are closely monitored at all times of day and night, through magic wards and the vigilance of the acolytes of the Temple of Na'arin who tend to the Underground and its skeletal inhabitants. 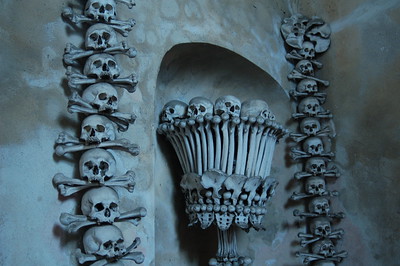 Ossuary by Todd Huffman
However, after the child's 16th birthday, they are eligible to take their first solo journey into the cemetaries, ossuaries, and crypts. They are encouraged to complete this pilgrimage before their 19th birthday.   This must be arranged with the Temple of Na'arin beforehand, and no one is allowed to accompany the child. They must prove that they can follow the paths of the Underground and make it through without angering the spirits of the dead.   The paths they take for this rite are longer than those for ordinary visits. They wind deeper into the older sections of the necropolis, to the tombs of ancient kings and to the crypts and even into natural caverns full of stalagmites and hidden ponds.   This rite is said to mimic the journey Na'arin himself undertook to become a god.

A teen's journey through the Necropolis is independent. It is intended to be a deeply personal, spiritual journey where entrants are encouraged to commune or otherwise connect with the spirits of the dead.

I'm going to visit grandpa while I'm down there.
— Necrosi teen

Unbeknownst to the entrants, acolytes of the Temple of Na'arin monitor their progress closesly. Vandalism or desecration of any sort are high crimes. The acolytes will also rescue anyone in dire need, and subtly attempt to guide their passage through some of the more well-traveled, well-known routes.

Necrosi citizens travel from all over Necros to visit the capital city for their child's coming-of-age pilgrimage into the Underground Necropolis.   This is an important ritual for all Necrosi, regardless of socioeconomic status, gender identity, or other magic ability, or magic classifications. However, it is doubly so for those with talent in or the desire to study necromancy.   Necrosi nomas also partake of the rite, as most still worship and desire to honor Na'arin.

A massive underground series of cemeteries, crypts, and ossuaries

Power swirls around you down there. The spirits are so close, so easy to call.
— Necrosi citizen and mid-level necromancer

Traveling the Underground Necropolis is not without dangers. Some encounter no troubles at all while others describe their experience as harrowing.   The amount of time spent during this journey varies greatly, and can even take days. Not properly preparing can become its own source of danger.   Other dangers include:

Answering: "a coming of age ceremony"
Visit hcraven's Competition Page Check all other answers to this prompt Competition Homepage

© 2019 - 2021. All content and images created by HM Craven (hcraven) unless otherwise stated. All rights reserved.
Cover image: by tdfugere from Pixabay

What a lovely tradtition! I really like what you have done with this society so open to necromancy.   The whole time I was reading it though I was thinking about how creepy and potentially dangerous it is... And then you dropped this:

Unbeknownst to the entrants, acolytes of the Temple of Na'arin monitor their progress closesly. Vandalism or desecration of any sort are high crimes. The acolytes will also rescue anyone in dire need, and subtly attempt to guide their passage through some of the more well-traveled, well-known routes.

I love that you added that. They are there both for the protection of the dead and the teenagers and that's awesome <3

I love graveyards just a tad bit more than the next person but this kinda creeps me out....still love it though :)

Interesting. I guess is not the point, but I like the vibe of several stages of life meeting.