A planet where the day lasts almost half and Earth year, and human civilizations have adapted to the unique climate. 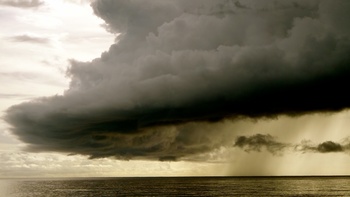 Afternoon Winds and Storms (CC0)
On Didome the sun rapidly warms the day side of the planet drawing in the frigid nighttime air. These cold winds rush toward the noontime of the planet, rapidly warming and developing into powerful storms. As the storms reach the current noontime they are forced up into the upper atmosphere and back toward the night of the planet. This atmospheric circulation keeps the temperatures on the day side around 35 C, and the night temperatures can drop to about -10 C. From the start of Didome's history, humans have adapted their cultures and civilizations to fit the environment on Didome. 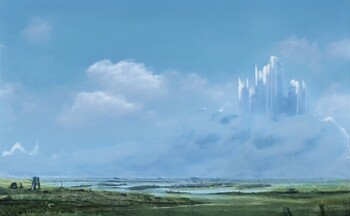 Artists rendition of The Fallen Palace of Barsamin on a storm cloud
Many cultures have myths and tales describing how their gods and spirits allowed them to settle on Didome, from being led to Didome from a corrupted Garden , to falling to Didome like seeds in the wind . Specifically, the Nil Yeni claim that mythical demigods,The First Descendants, were the first humans to thrive on Didome. The myths claim there were demigods who lived among the stars in palaces and gardens before they descended to Didome. Their fantastical powers allowed them to craft the environment to their liking, and many modern Nil Yeni cultures claim to trace their cultural practices to the supposed first decedents.

Windmills in the Fertile Shar
While the myths tell tales of the magical powers of the The First Descendants , the technology of modern nations is nowhere near as mythical. For all of Didome's history humans have had to rely on animals and wind for power. Metallurgy has been fairly advanced and even the earliest people knew how to make steel and refine ores. Many religions have theological ideas that support advanced biological concepts. like the germ theory of disease and natural selection; Barsamic healers wash their hands in distilled alcohol to rid them of the harmful spirits that cause infections. Finally, the Hu-CId-Ire have for thousands of days venerated the gonne and only in the last 300 days has the technology spread to the rest of Didome. Now as the the world population continues to expand, many believe they are at the start of a time of great prosperity, invention, and maybe revolution.

The planet of Didome has fascinating orbital dynamics and geophysics, and rich 4500 day long human history with multiple cultures, religions, and nations all adapting to the climate on Didome. This article give a great description of the world from its physics to its politics.