Overdale has changed dramatically over the years. Once, a few towns in White Wolf Valley joined together for safety and prosperity.   In doing so, built themselves into a large city overlooking a steep cliff to the south and a high wall to defend all other directions.   Many farms lie outside the walls of the city and thousands of people make their home in the area.

Show spoiler
Arc 1
2 decades ago, Lucius Merridian was Mayor of Overdale and lived a life filled with excess. Lucius used the people around him as pawns to get things done. He relied on Ian Serverus, Captain of the Guard and a group of adventurers living in town to enhance his power and wealth. During the Tournament of Champions, Ian lost one of his hands and had to be rushed from town and would not be seen again for years. The group of adventurers won however and while accepting their prize, Malchus Grimnas had harsh words with Lucius. The Mayor, already bound to a chair due to his large size, had a heart attack during the spat.   Zannon Carter took over as interim Mayor as was the protocol. He did not look for a replacement, instead keeping the position himself and leading the city under the guidance of the church.   In the coming years, King Carter as he would crown himself, became paranoid at the potential return of the group of adventurers and began systematically removing anyone from the city and surrounding area who was not human. He renamed the city Overwatch, to remind the citizens to remain vigilant against the threat of non-humans.   While waiting for the inevitable return of his nemesis, Carter made a deal with a former Archmage from Uman' Yiro to build a Warforged army to help defend the city.   Zannon would have to wait 17 long years for the return of his perceived foes. When they arrived, it was with an army gathered from across the continent and containing a wide variety of races. When the gathered army neared the city, the battle was joined and heavy casualties occurred on both sides. Seeing the losses and potential defeat, Karrik, the Dragonborn leader blew the horn he carried summoning Straad the ancient red dragon to help with the battle.   Straad arrived shortly after, razing the battlefield and attacking the city directly. Eventually, the ballista and arrows overwhelmed the dragon who left to rest and recover. In the aftermath, the attacking army breached the gates and the long awaited enemy fought their way to the throne room to confront King Carter.   Carter would die that night and much of the city was ransacked and burned before the chaos could be halted. Once the invaders secured the city, a new ruler was crowned. Liara Bryos, second in command of the White Ravens was chosen as Queen. While Liara did not want the job, she understood why it needed to happen and took the position seriously. One of her first acts was integrating the city and inviting any who wanted to make it their home were welcome. She also reverted the city name to Overdale and began the difficult task of rebuilding bridges with cities that had recently been made enemies.   It has been nearly 3 years since Carter's fall and Liara still presides over Overdale with a fair and just hand.

Overdale has historically had a Mayor but in recent years has grown large enough to support a self-proclaimed King.

Drakes are one of the primary threats in the area but dire wolves and bears also lurk nearby. 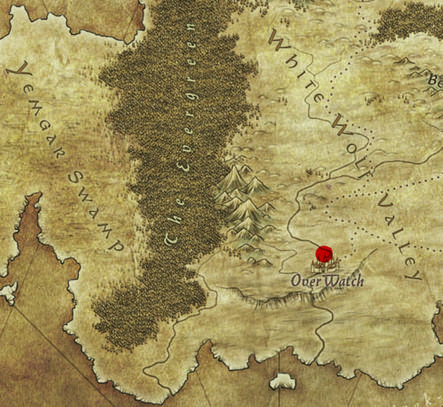