Una is the bastard daughter of Aspasia Anhelada, a high-class courtesan who lived in Overdale. She did not know her father growing up.   Inspired by The Tournament of Champions when she was a little girl, Una was determined to be a warrior. When her mother became deathly ill, they traveled to the Temple of Kord in Esterholt. Una's mother passed away there, and Una joined training.   When she completed training, her best-friend and fellow Paladin, Poe Tutillo, persuaded her to return to Overwatch with him and fight. Initially doubtful, Poe convinced her by quoting Kord's idea that "The strong and fit should guide and rule the weak," and that by siding with Overwatch, they would be siding with strength.   She was almost immediately put in a group with several other recruits, and they were forced to prove their worth. In their first mission, Una's rash courage almost killed her. In their second mission, when Fie Lar'va indirectly but intentionally blew up a room of Drow children, Una snapped.
Show spoiler
Arc 1
In their third mission, she personally and violently interrogated known terrorist and leader of the White Ravens, Briahna Ebelmare. She faced punishment for insubordination by Commander Grace when she refused to allow Briahna to be executed.   When forced to choose between allowing Briahna to be hung or risking her own safety by helping her escape, Una chose the latter and through a series of events, she found herself alone and facing a very angry Briahna in single combat surrounded by the entirety of the Elven army and in the end, quite accidentally discovered that she is part elf.   Possibly, by the grace of Kord himself, Una survived and begged Brettana Moonshadow to let her leave to try to stop her friends from marching an army against the elves. She did try to no avail and in the process she, Jadzia and Fie decided to defect from the Overwatch and side with the White Ravens.   The time that followed saw Una and her friends fight in the Battle for Winterhaven and push back the warforged onslaught, help kill Ian Serverus for the murder of Talia, fight the Angel of Death to gain the power of resurrection to revive Briahna and after an epic battle with the ancient red dragon Straad, Una died from her wounds from that fight.   Normally, the story would end there, but Briahna managed to kill Straad and race back to Esterholt to force Julie Fairway into bringing Una back to life.   Una has since met her father, a drow named Sariff bent on claiming Esterholt for himself and the dark elves, and learned that Julie is her half sister.   Una's journey to help save the planet took her to many places. After Jadzia's wedding to Vallus Grimnas, they traveled with another group to visit the Witch in the Yemgar Swamp to see if there is anything they can do for Marrek. During the conversation, Una's faith got a little more restored when the Witch presented the idea that she was a god trapped in her current body, and that Craig is the embodiment of Kord.   They flew to Esterholt and then Brightport where Una was surprised by Julie asking her to join on a trip to a remote temple of Vecna to retrieve part of an artifact to fight the demons. They were gone for some time but did eventually find the item. Una returned to the group weeks later and shortly after they left for the next stop.   In Uman' Yiro she reconnected and had an uncomfortable date with Archmage Duskwalker. He pointed her in the direction of a researcher who could give them information on the demon threat and possible solutions.   The party returns to Brightport one last time before collecting their guide and setting out for Ki'an. They wait at the Seal and when the other group arrives spend much time debating which course of action would be best. In the end, they are attacked by a rogue psion attempting to free the demons and Briahna steps up to perform the god release ritual while there is still time. Una stands by her side, silently hoping to join her in the afterlife following the ensuing blast of light.   As fate would have it, Una was left at the seal unconscious, Briahna's body now dissolved into light.   Arc 2
Una assists Julie with the day to day and training of new recruits at the Temple of Kord in Esterholt.

Una takes after her mother in appearance, with long, wavy white-blond hair, green eyes, and olive skin. She has the symbols of Kord tattooed on the backs of both hands, and other tattoos all over her body. These are rarely seen, however, due to the fact that she wears plate armor. Her father's elven blood has not influenced her appearance much. Her ears are slightly more pointed than is normal, and she is somewhat taller and more slim than the average human woman.   Una is insanely stubborn and loyal. She respects strength and courage, and is fiercely protective of those people who earn her respect. She relishes inflicting pain upon those who have wronged her or her loved ones, or shown cowardice, but dislikes using emotion to hurt. Una, as a paladin of Kord, has vowed to fight for whomever displays the most strength, power, and courage. Her allegiance to Overwatch is not very strong, but her loyalty to Gavin, since he risked his life to save hers, is nigh unshakable. 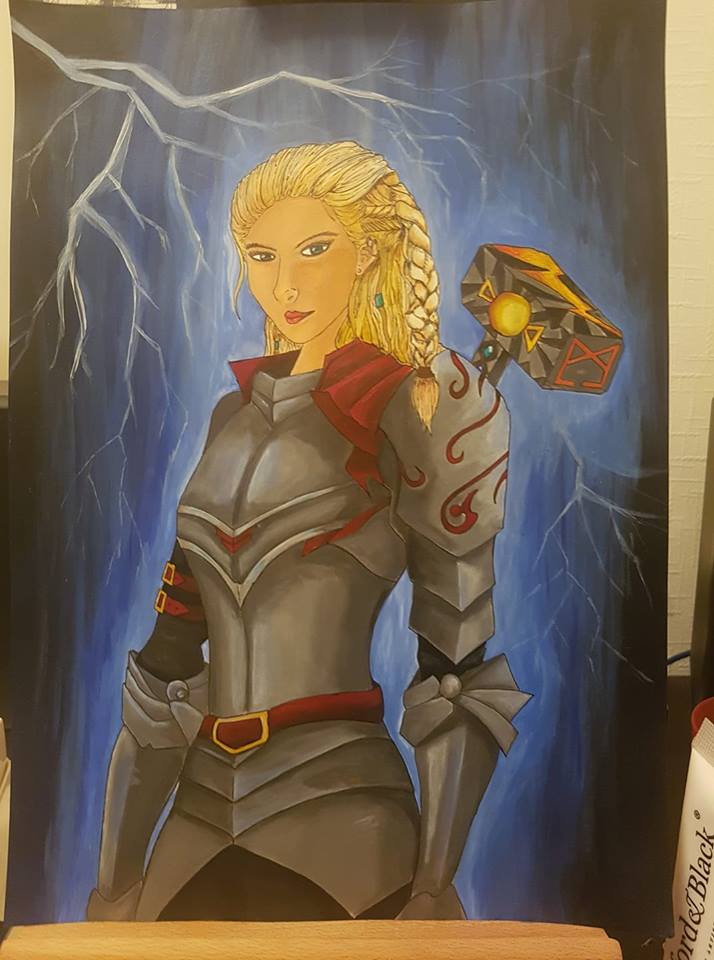