Jadzia Grace is the dark-skinned daughter of Commander Patrick Grace and the ‘lady of the night’ Helena. When she first appeared among the ranks of the Overwatch, all her peers knew were rumors and hearsay. She was the daughter of a very prominent member of their organization, she had a powerful husband in the past but was not a widow, she was a bastard to a whore. Those who had the courage or foolishness to ask Jadzia about these claims directly were met with a cold stare.   It wasn’t until she found her place among the Crimson Shield that the ice that seemed to surround the girl began to melt away. Jadzia was eager at a chance to prove her mettle, and set forth with her goals in mind.
Show spoiler
Arc 1
After their first successful mission, they were sent into a drow under-city to damage the caverns enough that they would no longer be a threat to the human city above. When it is revealed that children were harmed- and most likely killed- in the blast, she did not seem to blink an eye. However, in seeing how distressed Una Anhelada became, she pulled her companion aside and explained that drow 'did not belong' in the human world, and would be better off dead.   Jadzia’s opinion on the ‘lesser races’ seemed to be very strong and run quite deep, but the reasons for these feelings were a mystery. It was clear she did not view death with levity- when she believed that their prisoner Briahna had died and found out the truth she wrapped Una in a gracious hug, knowing she hadn’t been involved with the death of a human. However, the hate remained, as the main reason for her defection of The Overwatch was seemingly their hypocrisy in having a tiefling woman join the Crimson Shield. She saw this act as a personal attack from both her father and the very nation she was fighting for. It did not take much for Una to convince her to step aside.   After joining up with a new team, the White Ravens, Jadzia told Liara some of the reason for her hate towards non-humans. She had once been married to a tiefling man named Darmock, who had not treated her kindly. After being bit by a vampire, Jadzia was faced with a choice- either let herself die and become a monster, or return to Darmock to have him remove the curse. She was reluctant, but for fear of her life she went along.   On the way she met the tiefling Vallus Grimnas, and they hired him to help escort the group to Esterholt. Jadzia could not hide her prejudice, which in her weakened state presented itself as fear rather than hate. During the journey the two had a rocky start, but as Vallus learned Jadzia’s story and Jadzia learned of Vallus’s nature, they became quite close.   When they arrived in Darmock’s mansion, much of the mystery became clear. Darmock was completely insane, beating Jadzia and then kissing her moments later. Though she tried to manipulate him, it was akin to trying to control a storm. He tried to undress her- showing without shame the burns that he had been the cause of while Vallus tried to keep her clothed. In the end, Jadzia’s vampirism was indeed cured, and she dealt the killing blow to the man who had destroyed her childhood- collecting his soul in the process.   After that distressing experience, Jadzia was not given a moment of respite before discovering that her father had been hung for treason. She suspects that Marcus Sana has something to do with that fact, based on her knowledge of her former equal. She also learned that he had been a White Raven all along, which cause her equal parts shame and respite. Her father was proud of her- but she had still betrayed him, and he hadn’t trusted her in the first place. She didn’t know how to feel, the grief nearly overwhelmed her, but she was forced to suppress it for the greater good.   As she began training more with Blood Magic, Jadzia revealed how she had escaped Darmock's clutches the first time. She did not come upon her magical talents through study or by chance, but with a deal with a demon. She confessed this to Vallus, who then promised to help her retrieve the soul she traded away. They kissed, though both broken souls were so awkward that they quickly scurried to other sides of the room.   After a mostly successful foray into blood magic, Jadzia set her eyes on getting her soul back from a demon named Valnor. She was successful in this endeavor as well, by trading the souls of Darmock, Ian Serverus and others in exchange for her own.   Following one more short mission, to help Marrek find a cure for his lycanthropy, she and Vallus married and officially retired from adventuring.   They decided to stay in Esterholt and try to make the city a better place, which Jadzia took very seriously. She took over as Mayor after the previous Mayor, Christina Keller was murdered at the hands of Sariff.   Arc 2
It is revealed that Jadzia and Vallus have a set of twins, a boy and girl named after their parents: Patrick and Tessia.

Through her life she has held many titles, daughter, wife, soldier, defector and blood-mage. With each new title that she gained and lost, Jadzia’s mindset had been slowly warped. Now, Jadzia is willing to risk everything of herself to gain back what she had given away, but she is not willing to risk her loved ones. She keeps many secrets from even those closest to her, and often her gaze will wander away from her text while studying, the dark red pools looking worrisome and guilty. She no longer seems to hold a hatred to non-humans, her relationship with her friends and Vallus proving to her that they do have every right to belong on this world. (And of course, practical experience had shown her that her original assumption was wrong and they do have souls, given that she still carries Darmock’s on her).   Physically, Jadzia was born quite sickly and small, and has stayed that way most of her life. She is small for an adult, but tries to stand tall and never looks down. She is thin and boy-like, though her facial features seem to make up for this by being extremely feminine. Her lips are plump and her eyes, though set a bit deep, seem larger than average. She has sharp cheekbones and a sharper glare in those large dark green eyes, which flash red when she uses her ill-gotten magics.   Her skin is dark- a trait she received from her mother. Her black hair usually hangs down in one long, messy braid to keep it out of her way without much effort. She wears this because there are burns and bruises on most of the skin she covers. If anyone did happen to see these, they would have to assume they were accidents as she was practicing mastering her powers, but those who know her past know the real culprit. As of late, Jadzia has taken to removing her cloak when she is studying- but only in the company of Vallus Grimnas. 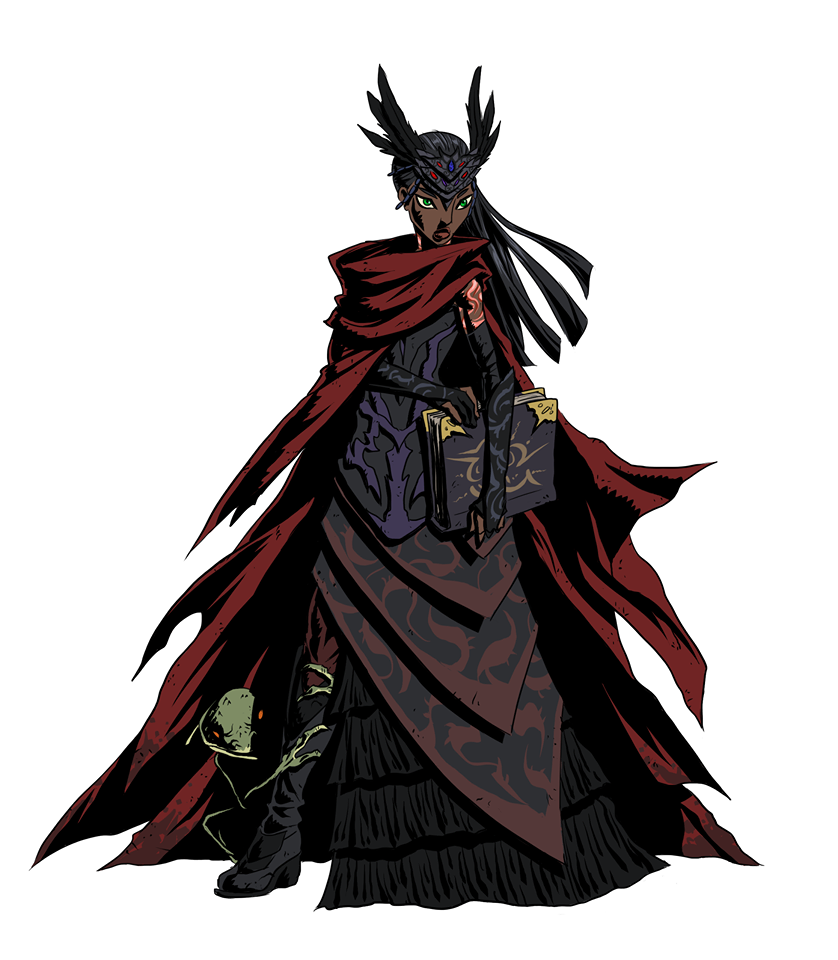