Duncan Joybottom was born from a dwarven mother and human father. Much to the consternation of his family and against typical routes for his race, Duncan had a love of music and trained to become a bard. It was revealed to Duncan as he grew older that he was not half-dwarf, like he originally thought, but was a full-blooded dwarf. Upon revelation of his true parentage, Duncan set out on a journey to discover who his real father was. During his travels, he came upon a group of adventurers and joined forces with them. They had little success initially, but they soon came into their own as they successfully rescued the daughter of Lord Padraig, the mayor of Winterhaven. In the process of rescuing the daughter, Talia, the group discovered and stopped a cult of Orcus from summoning the demon.
Show spoiler
Arc 1
The following months were some of the best of Duncan’s life. He was named a knight of Winterhaven and stayed there for a few months with some of the members of his group. Duncan also had success as a bard, gaining a group of followers and fan club. However, the group grew restless and decided to venture forth, rejoining the members of the group who had left Winterhaven for Overdale. There, all members had success as adventurers, helping rid the town of cursed elves and even winning the Tournament of Champions. It was shortly after this, though, that Duncan embarked upon his final journey. The group was tasked with recovering certain rare spores for the Black Hand, a criminal kingpin in Overdale. During the quest, the group came upon an old bridge spanning a large crevasse. It was impossible for the entire group to cross to get the materials due to the deteriorated condition of the bridge.   Duncan was selected to cross, being the lightest of the group. He was secured by tying rope around his waist with the members of the group anchoring him, just in case he fell. After some success, Duncan stepped onto a weakened step and began to fall through the bridge. The group, caught unawares, was unable to grab the rope in time, sending Duncan plummeting into the darkness and his death.   Duncan did manage to leave a small legacy though. A tribute band was created in Winterhaven, named “Bottomless Joy.” His remains were gathered later by the people of Winterhaven and he was properly buried in the town with a statue erected in his honor.   17 years later...   Duncan kicked his way out of his town beneath Winterhaven Hall. He didn't know why he had been brought back but sought to find out what had been happening in the world. Ian and Talia explained the war and that his friends were still out gathering allies. Duncan outfitted himself with new gear and left to find his friends.   He met up with the group, near Donhurst. Together, they traveled back to WInterhaven, fought the Overwatch at the gates and after that, battled Ian himself after he struck down Talia and confessed to killing Briahna and Talia's fathers.   With Talia and Ian dead, Duncan, Yenward, and Thoril took it upon themselves to tell Nathaniel. Shortly after, with war still on the horizon, Drakonis returned to the group and they met a new companion, Diana. They were sent on a mission to Durnhollow and met another, Hondo who joined them. Upon returning to Winterhaven, they found that the army had already left for Overwatch and they raced to catch up. The battle was already joined with both sides taking heavy losses. Thoril gave a signal to the Dragonborn leader to summon their dragon, and when Straad arrived, the battlefield was thrown into chaos. Karrik, the Dragonborn leader was executed by the Elves for unleashing the dragon and Thoril was to be next but Ironhide arrived in a new Half-Orc body and ran Thoril through himself. This death, left the party fractured. Yenward and Duncan walked off, not understanding what just happened but agreed to come back to finish what they started. Together, they attacked the city and fought King Carter in his throne room. They were successful in defeating him, Yenward knocking him through the huge window where he fell to his death.   With Carter dead, Yenward decided it was reckoning time for Ironhide as well and also threw him from the window for killing Thoril.   Duncan stayed with the group and found Malchus hiding out in Uman' Yiro, traveled to Brightport and eventually left the group to go in search of his real father in Bandit's Rest.

Duncan is a very headstrong dwarf. His life as a bard led him to become harder to the world and he developed an affinity of intimidating people. However, this did not interfere with his ability to love life and live in the moment.   Duncan is an ambitious adventurer who was always willing to help those whom he considered to be less fortunate. He is resilient in the fact that never gives up on something until all options are exhausted and nothing more can be done. 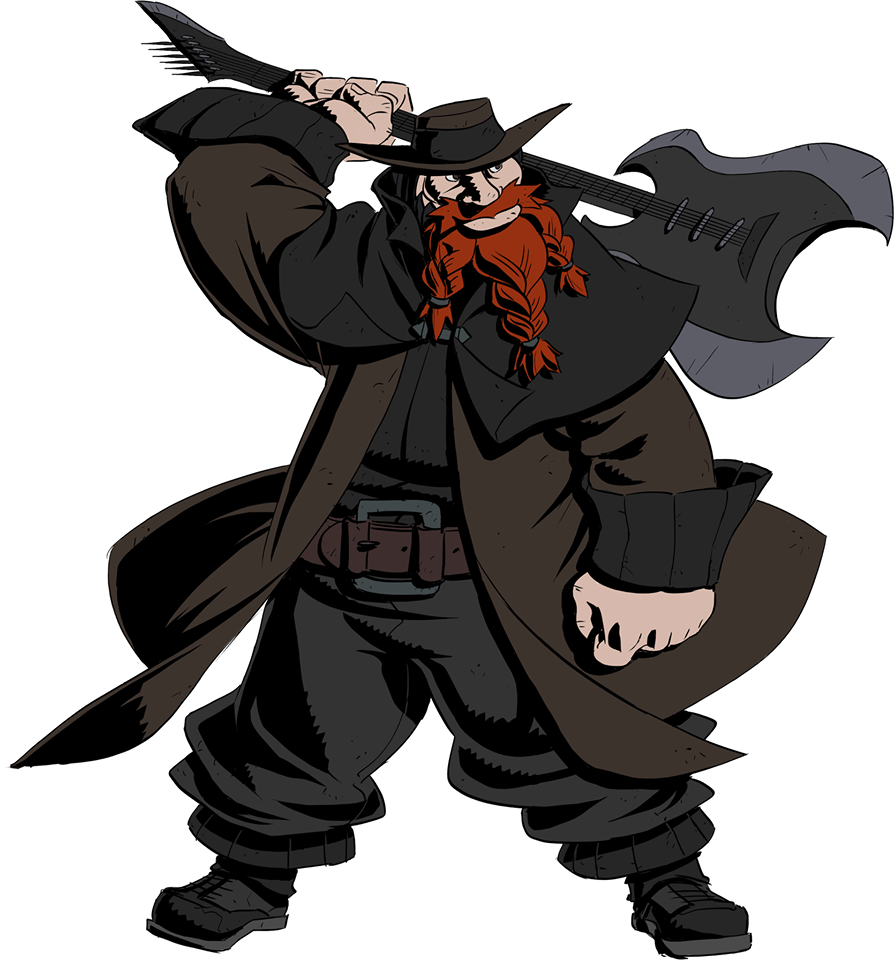