If it weren’t for the nearby Orc Encampment, Donhurst would be a very pleasant city to live in. However, in the past few years they’d built high walls and guarded them heavily to protect the city, which has had a positive effect on the community. Farming is still nearly impossible outside of the walls, as the Orcs will destroy the crops and kill any farmers they see there. If one could get past that, the town is pleasant and open-minded.


Donhurst has been a city under siege for many years due to the nearby orc encampment.
When Group 1 came through the area to build an army, the Mayor was more than welcome to accept their deal to help with the orcs.

Together with the dwarves from Stonesunder the orcs were crippled long enough to send forces to help with the war effort.
Once the war was finished, Donhurst went back to business as usual, walling themselves off from outside threats.


Sometime in early Yeste' in the year 1266, a young man named Mox apparently stole an artifact from the Temple of Erathis. The Bell of Vecna had been on display for some time and legend holds, that it could bring the dead back to life.
Mox also stole the instructions to the ritual and attempted to bring back a loved one. Mistakes were made and something in the nearby mines was awoken. The town's citizens began to disappear and monsters began to roam the streets.

Now, all but abandoned, Group B discovered the nature of what happened in the city and Kalden Halek successfully cast the counter ritual, banishing the hideous creatures from the area.

Just as the city was deemed safe from demons and undead, The Fang arrived and began searching for the Bell.

The Fang it seems, decided to stay in Donhurst. What they didn't expect was that The Countess, a centuries old vampire who lives in a castle near the city, would make contact with them.
It is unknown how the discussions went down, but at least some amount of the Fang were turned into vampires and are working with The Countess.

Orcs from The Divide are the largest threat in the area. 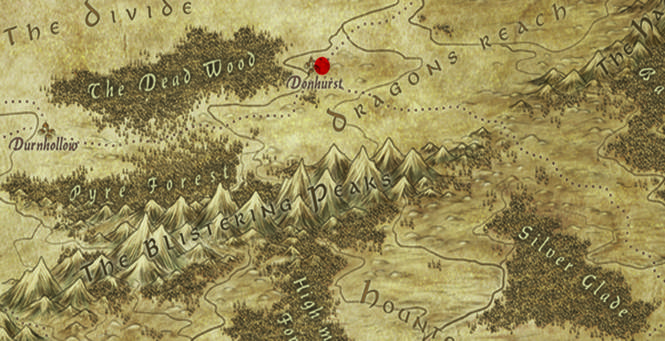