Very little is currently known of Diana and she prefers it that way, having yet to reveal even the rest of her name to her party members. She joined Group 1 as they were traveling to Durnhollow at Nathaniel's behest, claiming she needed information from Carter. The next few days did not ingratiate her with the rest of the group. Even though her persuasive and magical talents helped the group form an alliance with Durnhollow among other things, the Tiefling’s cold demeanor and disdain of humans produced some bad blood.
Show spoiler
Arc 1
Diana helped the group throughout the attack on the Overwatch, playing an important role in strategizing how to get in the walls. Once they were in the city her magic proved crucial to the party’s success. While in Carter’s castle she appeared to have knowledge of the archmages and was easily able to comprehend what she could glean from Loreweaver's journals before pocketing them.   The appearance of Emon Thermack clearly shook Diana, causing a spontaneous eruption of flame from her hands. For the rest of the battle she seemed intent on nothing but destroying Carter and Thermack, and when the archmage was slain she collapsed onto the ground.   She gave a rousing speech after the battle that helped to soothe tensions between citizens of Overwatch and the coalition army.   After the city was settled, she continued with the group for a while but after a deal with some Drow seemingly went bad, she disappeared and has not been seen since.

Diana doesn't broadcast her magical abilities, preferring to wear a heavy cloak with leather armor instead of robes. In more populated areas (especially those that have large number of humans) she tends to travel with her hood up, attempting to keep out of notice and avoid any trouble she might find simply for being a tiefling.   Her clothing reveals very little skin but what does show is deep red color, darker than the average tiefling but not too unusual. When expecting to be on the road she’ll put her hair up in a braid but normally the wild mass of dark, unruly curls is loose, broken only by the large horns with curve around the sides of her head. Bright yellow and black eyes make her look that much more demonic in the view of most people, and their cold appeasing gaze does not help matters.   The tiefling is very skilled at manipulation (whether it be by magical or mundane means) and seems quite intelligent, though dismissive of others. Unless it would suit her goals to act otherwise she does not shy from openly stating her mind even if doing so might offend. Any history that might explain the way she acts or her intense hatred of humanity is currently unknown, as it is likely tied in with the reason she is unwilling to extend her trust. 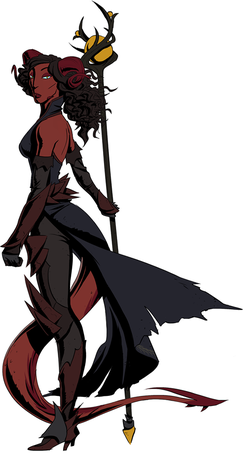