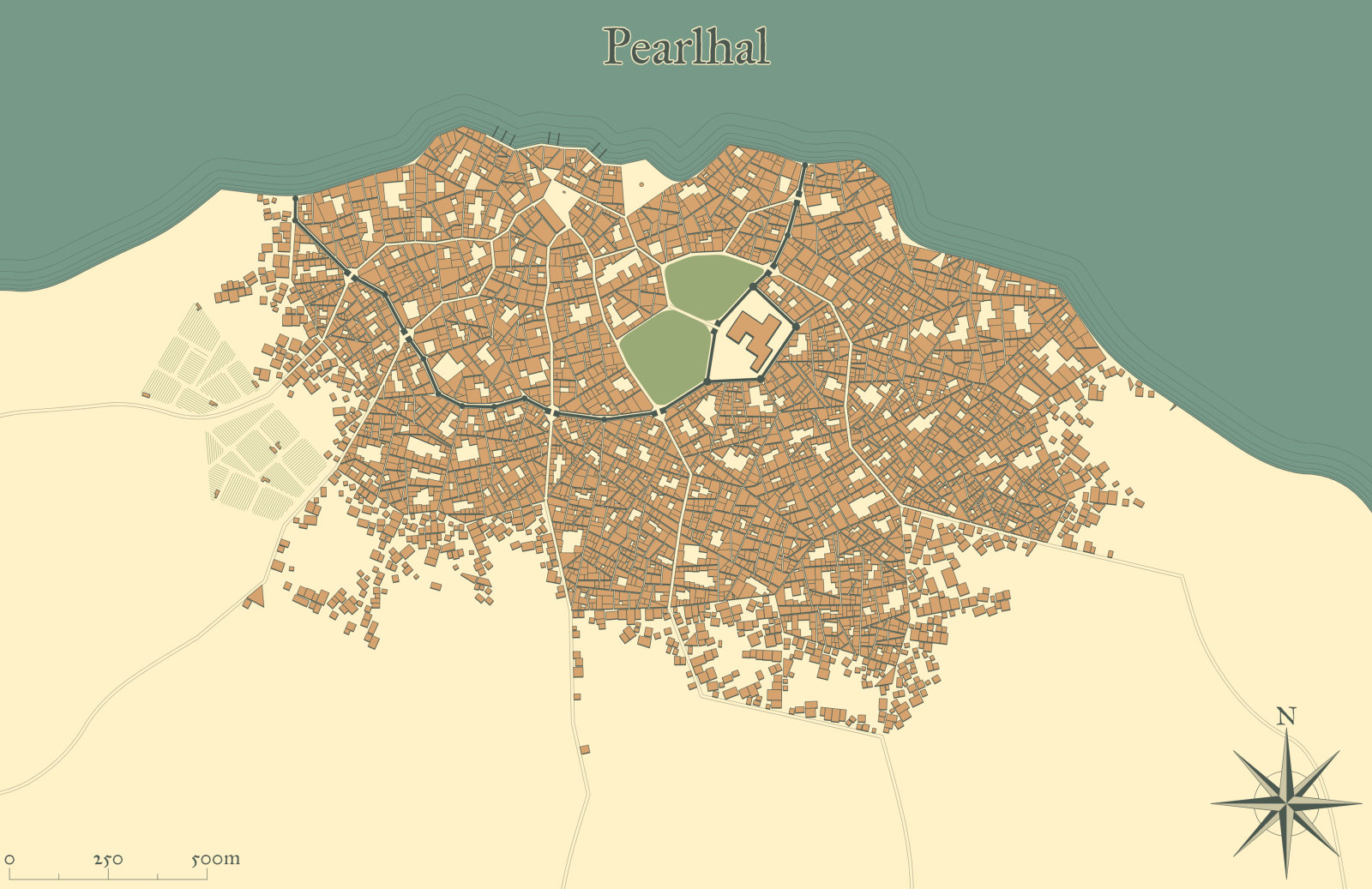 Many races call Pearlhal their home, the most common are of course Humans and Elves but races as Half-elves, Drow and Dwarfs are amoung the residents.  Since Pearlhal is the capital of the Dercian Empire it is also where the wealthiest individuals and nobles live

Pearlhal is ruled by a council of 11 with the Emperor as the leader or an representative for the Emperor.    Law & Order: the city watch is the local police force in the town, its duties outside of capturing criminals it also gave directions to people, or called for medical and priestly aid when needed, in general the duties of the watch was the promote the idea that Pearlhal was a city open to all as long as they knew how to behave themselves. When the city watch had caught someone they would be taken to one of the judge offices spread around the city where they could either be sentenced or if the case was deemed worthy appeal their case to the council.

Pearlhal is in a unique position in the Empire since no armed forces are allowed in the city with the exception of the Imperial Guard because it acts as both the Vanguard during a battle as well as the personal protection of the royal family. even if there is no military on the inside of the city, that does not mean that the city is defenceless because on the landward side it is protected by strong walls with forts surrounding the city containing the legionaries tasked with protecting the city and on the seaward side the imperial navy patrolled the sea outside the city. the navy is stationed in a naval base just 10 km further west from Pearlhal.

Pearlhal is known for its broad and busy streets and boulevards. Its heavy traffic, and a constant during the day and most of the night, it is monitored by a specialized branch of the City Watch known as Wardens.   Hire-coaches are two-wheeled, two-seat carriages that could be called and dispatched to specific locations. Hire-coach drivers roams the city streets in search for passengers, who can call a free coach with a shout. Fares, are agreed upon in advance, rarely exceeding 4 Farthing.   Carriages are luxury vehicles that could accommodate up to 8 passengers comfortably, they are commonly used by the nobility or wealthy citizens. Prices varied, but usually the carriages and their respective personel were hired for an entire day or more if agreed upon.

As long as people can remember, there have always been a settlement in the area but its in the last 1000 or so years that the city began to grow to the seize and importance it have now. when what was then the Kingdom of Dercia made the city the capital it began to grow fast.

Pearlhal dont have a industry centered around tourism, the city does get its fair share of visitors that arrives from all over the empire to get a view of the buildings and to experience the life in the eternal city.

Pearlhal is a coastal city, archaeological excavations around the city and surroundings have revealed that there have been continuous occupation of the area for several thousand years.  Unlike most of the northern cities Pearlhal enjoys a deep water harbour that helped the economy when the city began to transform into what it is today.  in the center of the city, where there are a small hill the imperial palace is placed.

It is believed that the city got its name from the large amount of pearls in the bay outside the city.
Founding Date
Unknown
Alternative Name(s)
The Pearl or the Eternal city
Type
Capital
Population
218.430
Included Locations
Owner/Ruler
Emperor Malthin II
Ruling/Owning Rank
Emperor
Owning Organization
Empire of Dercia
Characters in Location
Related Professions