1113 Years after the Landing of the Fourth Fleet of Iwa

Approaching the Battalion requires many things.   Not the least of which are these; a strong spirit, an expanse of Drakaise and a will capable of forging a destiny of your own.
— Notes on the DraKaise Battalion. 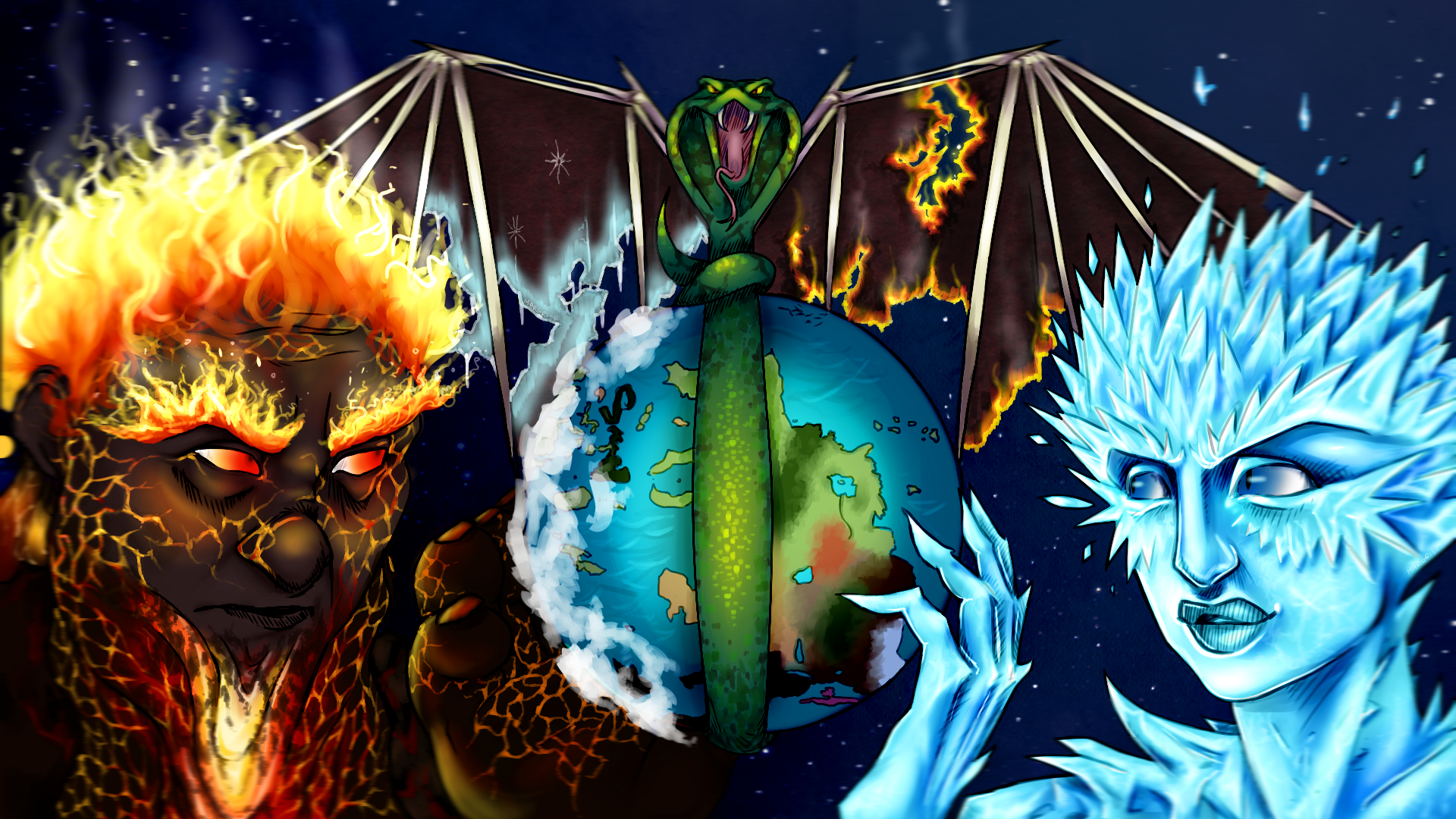 Arydia and the Giants by Margrise
Since before time had substance, there have been the giants celestial, those beings whose very thoughts influence the ripples of DraKaise⁣⁣ that span our world. Every philosophy, every kernel of fundamental understanding, every action and consequence can be found as a result of the interactions between these two. From the creation of The Pantheon⁣⁣ to the mysteries of the varied terrains of Ithungsida⁣⁣; all are subservient to the whims of the Giants.     They created the world of Arydia after destroying the ones before it. They created The Knotted Snake⁣⁣ as an antagonist to them both. They seek that which is ineffable, that which can only be described as the aims of the giants. And we are all but cogs in their eventual conclusions.

The DraKaise Battalion is a world built as an active and evolving D&D 5e setting for DMs that run games in the setting.   This means that the Lore is written with a goal of being accessible to three different groups of people; Players interested in making characters that fit into the world, Dungeon Masters that want to run games that make sense in the world, and the errant reader that merely stumbles across it and finds it interesting!
We shift our gaze from the southern bulk of the The Fire Giant of the South⁣⁣ lighting the summer nights, to the glimmering bulk of The Knotted Snake⁣⁣ that can be seen as a faint shimmer in the sky, to the north where the The Frost Giant of the North⁣⁣ holds domain. The night sky above Ithungsida⁣⁣ glitters with the constellations that define the many gods of The Pantheon⁣⁣.   However, our focus will stay in the north. The lands of Ithungsida fill a large portion of the Northern Hemisphere, with only the farthest stretches of the Islands of Esplorzeni⁣⁣ approaching the equator. Here lies an expansive country covered with people, cities, and disagreements that stretch for a thousand years. From an Unorthodox Colonization to a Continent Spanning Empire to the Funeral March of Araetule⁣⁣, to the horrors of The Orcish Incursion⁣⁣ and now the survivors beyond that.   In all of this, the tides of DraKaise⁣⁣ have swayed and turned, bringing adventurers as needed to deal with the dangers it presents. Until a few years ago, the shattered remnants of The DraKaise Battalion⁣⁣ hid in the Feng Mountains⁣⁣ and licked their wounds, yet as dangers have once again found their way to threaten the lands, they have returned to the forefront of public consciousness; with squads dispatched to every corner of the continent to help fend off evil and stave destruction.   Even now, as DraKaise⁣⁣ swells anew, the forces of evil have begun to surge forth and attempt to topple the careful peace that has held since the Orcish Incursion. Now, the Battalion and it's allies in the many kingdoms must stand against the horrors that seek to destroy civilization and unwrite history.
Arydia - Ithungsida
Open full size
The latest map of Ithungsida, made by our amazing Pumpkinhead9092!

Do you have that Want, that Will, That “Thirst” for adventure that you can't explain?!   Do your family fear that you are DraKaise-Stricken and lost to the world.   Do you fear the same?   If you answered yes at all, or even wanted to, then the Battalion requests your aid!

As a new adventurer to these lands and a new member of the DraKaise Battalion, you are expected to know about the world you inhabit. This is a breakdown of information for you to read before diving deep into the mysteries of Ithungsida and Arydia.

Intro to the DraKaise Battalion

What you need to know to understand the world.

Lore at a Glance

An Overview of the important parts of Ithungsida.

Beneath the Giants are the gods, those beings that have been uplifted and granted powers over the cosmos and the very fabrics of reality.