The Glowing, Monster-filled, Sea of SosIwa.

After five hundred years, the fresh clean waters of the Iwate Sea still retain the slightest glow of irradiation. A reminder of the fury of the gods and the hubris of mortal science. The Reminder that even the strongest fall in front of divine might. The Iwate Sea never fully recovered from the Atomic Blasts that ripped through them.   The capital city of SosIwa; Iwate stands as tall as it did in the years before, but the stone walls are thicker and the ports are built in the memory of tidal waves that washed over the landscape. While, on the opposite side of the sea, the rebuilt megacity of Broken Dams bears no such scars, the people remember the fury of the gods over the use of the items. 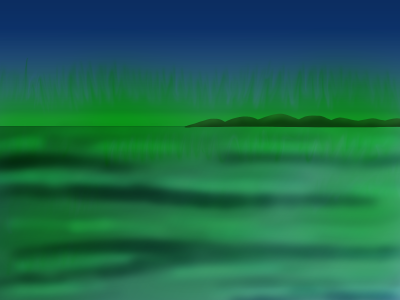 Iwate Sea by Ashleigh D.J. Cutler
The Sea is one of the most dangerous waters in Ithungsida, with monsters of MerGus, the lost thoughts deposited in the briny green water and unnatural algae being fueled by Darchada, the Uncontrollable Spread. The SosIwan Navy has it’s only port here, defending the trading routes populated by armored ships from Araetule and countless ships heading out as far as Aegis and Algier. The amount of trade and personnel lost from attacks in a year are high enough that they have spurred the development and use of Trains and Airship based trade in the region to an even higher extent then it might be otherwise.   Not dissimilar to the way in which the Mesa helps to control their native Bulette population, Iwate and Broken Dams both offer extensive bounties on the various types of creatures known to be found in the sea. Due to a high level of fraud, the requirements on proof of the kill are fairly stringent.

The Iwate Sea takes up the middling ground in size between the The Great Bay and the Sea of Hearts. The waters are fed by the Feng Mountains and glow with a dull shiny green that is only really noticeable at night.   At one time, this sea was known for it's islands that held any number of secrets. Such as villages and groups of rare and reclusive species like Arydia-born Arctele, however, most of those that remember and take note of the seas today think only of the mortal hubris that brought it to it's knees.

The fresh waters of the Iwate Sea hold a number of fish. However, many are found to be deformed or poisonous and are destroyed for the sicknesses they have been known to cause. Due to this, the fishing of the region is heavily restricted and massive fines are applied to those that overfish the area.   The islands retain the largest population of Arydian Arctele, which are said to be found on one of the islands in the Iwate Sea, the exact location and population is privately kept knowledge due to the secretive and reclusive nature of the species.

The biggest natural resource of the Iwate Sea in modern times are the heavily guarded shipping paths that are cut through them.
Alternative Name(s)
Glowing Sea
Type
Inland Sea
Location under
Feng Mountains
Owning Organization
SosIwa
Contested By

Where are these Quotes from?

Common Sea Shanty Generally sang by crews of trading vessels bound out towards Aegis or Algier. It and it's many alternate verses reference many of the countless rumors and tall-tales that surface and spread about the Glowing Sea. Including those about impotence of sailors after journeys, grand monster fights and other interesting tales that are mostly unfounded.
Feng Mountains 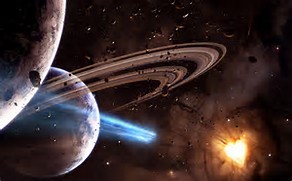 interesting, a semi-radioactive lake with cities around them and animals alive within and around it. Does your world take place after nuclear Armageddon, or is this an alternate timeline?

This lake got hit with two incredibly destructive nuclear weapons. This was so major that the gods themselves responded and obliterated those responsible. It was ferocious and terrifying.   It was also something like 600 years before present day, so it's strange that it still glows. That might hint at things other than radioactivity causing issues, or it might not! Who knows. :(   Chernobyl's got animals near it! Thanks for the comment!

How does fishing and overfoshing work? Will caught fish, if belonging to the poisonous kind, be thrown back. How are "healthy" fish determined by the fishers? Are there tries to breed the mutations out by fishing the mutated fish?

Fishing and overfishing are concepts quite separate from my world, I don't see a major reason to expand on those? The article clearly states that poisonous fish are generally destroyed along with deformed fish, I imagine the fishermen have figured out how to tell what is healthy or not over the past several hundred years.   And the mutations are thought to be caused by the environment... It is a "Glowing Sea" that was hit by nukes, not really about "breeding the mutations out".

I like the concept of irradiated nature. Are certain animals mutants? Are they unable to reproduce? Have some animals evolved to use the radiation as an evolutionary mechanism? (e.g. growing larger and faster)? Overall, good worldbuilding.

I imagine all of these are true to an extent. Mutants are hinted at with the mentions of "Deformed" and the "Three eyes and odd-numbered fins" in the song.   Evolution is fairly slow, however. So 600 years has definitely produced some oddities, but nothing refined or even particularly useful.   Thanks for the comment!

Sorry, i tried to reply but always get the 404 dragon...   Understood. I realllly like your way of naming things, especially the deities (MerGus, the lost thoughts for example). You found a nice way to blend deities with a post apocalyptic scenario there.   I asked about overfishing because you mentioned that it carries a hefty fine, and i was curious what that contains (just the healthy fish i presume so it doesn't help if they throw back the mutations again, it wouldn't count against their allowed ratio, hence destruction. They would have more space on their trawler if they just... ahem... forget that they ever caught them and throw them back though.   I presume there are central facilities to control the destruction of the fish then? Some fishermen might otherwise be tempted to pass healthy fish as poisonous, in order to escape those overfishing fines (if it were up to them to destroy the fish... eating is a form of destruction too... ).   Sorry for being so focused on the fish though, its just that in my experience letting players/readers witness such things: ( Hey, OlTat... that fish you declared as poisonous... those are perfectly fine... why don't you let us see your yellow book to check how much of your ratio is up for this month... Uuh... you were unlucky for being so lucky this time it seems) or something along those lines that matches your world better, helps to give players/readers that nice cozy "okay... it is a radioactive wasteland but at least people still work as they are supposed to" feeling. Its just usually best transported by the little things. Hence me asking about the fish.   I also presume one is not by choice a fisherman in such a place, if he could make money by monsterhunting. So are invalid fishermen the norm? I presume most are "dirt poor" compared to other lines of work. Is there probably someone making profit of them by exploiting their situation? Corruption rearing its ugly head ?("Yeah... i could theoretically look away OlTat, but... etc...)     Oh and again... really like the names. They do feel considerably post apocalyptic.   Oh.. and no need to answer all questions, keep as adventure / scene hooks as you see fit .   So long and thanks for all the... fish .

I can only imagine for any people living shore at night there to be annoyed by the light coming out their window, or how it must be some fun place to actually go sit by and just watch a green sea at night with your lover.   Question: How "safe" is it to drink the fresh water of the sea? Instant cancer or you need to drink a few bottles to get radiation sickness?

The water is actually mostly safe, any major human-based problems are exceedingly rare and may have only truly been present in the first years. You'd probably have to be in the water most of your life and be predisposed to cancer. XD   Good thoughts of romantics! Should definitely work that in somewhere. Thanks for the comment!